Where do your rockets take you?

Dem Brudders dabble in model rocketry.  In fact, it was older Brudder Dick to whom I owe success with my first flights.

As with many readers I’m sure, my participation in model rocketry can be directly traced to the Space Race that began in the 1950’s and culminated in the Moon Landings.  I struggled in school; perhaps my best subject in elementary school was landing myself in the principal’s office for bad behavior.  Had I started school a few decades later, I’m sure I would have been the Ritalin poster child.  I'm rather jealous of kids who get to take that medication nowadays.  It likely would have saved me a few years of grief.

​In those days, a respite was live telecasts of the Apollo missions in the classroom.  I recall school literally stopping during the missions, and the black-and-white TV’s in all the classrooms were tuned to live network broadcasts when major mission events occurred.

I was captivated by these, and don’t recall missing a single one to go to the principal’s office.  I can trace my love of science almost exclusively to the NASA space exploits of the 1960’s and have the greatest gratitude to those teachers who recognized the educational value of turning on the TV to let us see science and history happen live.  OK, I did have some teachers who inspired me with their lessons including an English teacher whose advice I ignored to write every day—but only for a few years.

As many in my same situation will remember, an excitement over space and rocketry instilled by the 1960’s space launches and movies of the period motivated me into trying to build rockets of my own.  Around age nine or ten, I succeeded in launching a rocket I'd built powered by baking soda and vinegar to a breathtaking height of three feet.  Considering that technology mature (and running out of Mother’s vinegar supply) caused me to look to other reactive chemistries.
It should be mentioned here that my rocketry pursuits were done largely in secret at this point.  In other posts, I’ve mentioned that our mother did not particularly care for our participation in any model building activities, and I assumed she would feel the same way about my desires to build my own flying rocket.  For the most part, my methods to hide my clandestine rocketry activities were probably similar to those you’d find today in so-called “rogue regimes.” 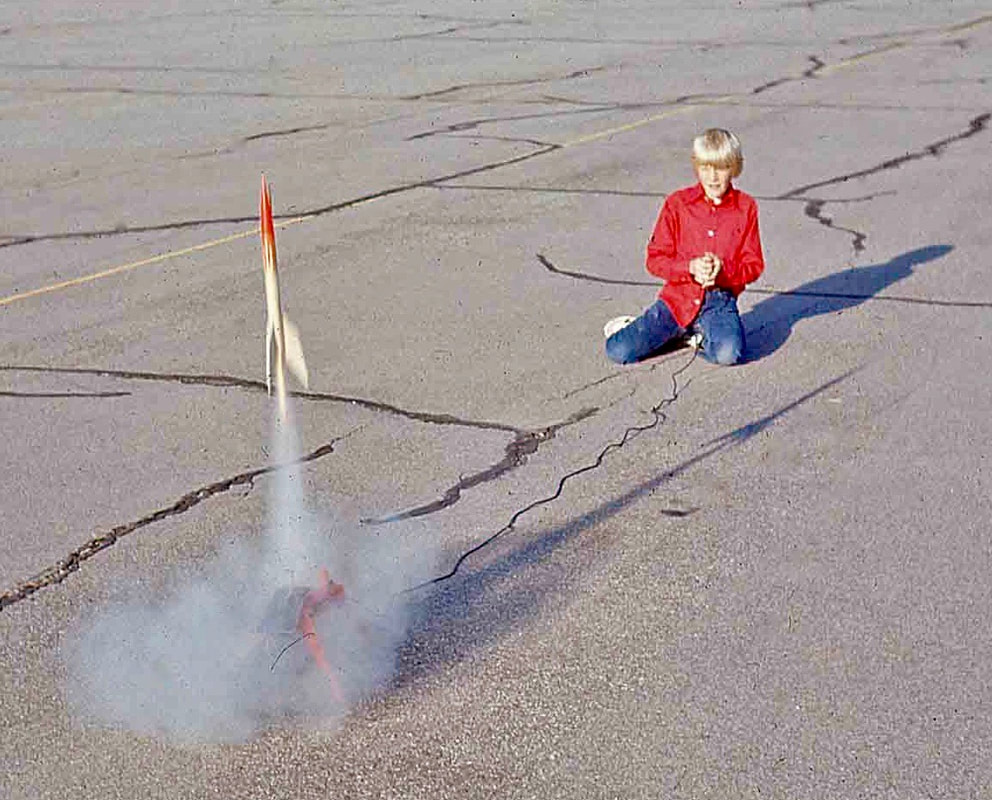 Brudder Dick caught this photo of the first model rocket flying that any of us had ever seen.  A Centuri Astro-1 takes to the sky on a 1/2A6-2 motor, also sold by Centuri.  To get that Servo launcher to work, I had to use both hands to get a good seal on the air-plunger.
From school lessons (and TV), I knew that the Saturn V was powered by kerosene and LOX.  I figured those materials should work well for my next rocket.  Finding the kerosene was easy, as we had a kerosene lamp in the house.  The LOX was a different story.  At a friend’s house, I saw some “LUX” dishwashing soap, and mistook that for the all-important oxidizer component of rocket fuel.  It wasn’t long before I realized my mistake; Lux dish soap in no way helped kerosene to burn.   And tin cans make a horrible combustion chamber.

About this time, our oldest sister’s boyfriend knew of my foundering rocketry development program.  He told me about a catalog he had with model rockets, engines, launchers, and everything I’d need to fly rockets.  He said he’d give it to me, and I was overjoyed when I learned that such a thing existed.  I hadn’t considered outsourcing the engineering of my own rocket program.  However, he kept forgetting to bring the catalog over, and then, horror of horrors, he and my sister broke up.
​The lightweight materials and modularized motors suddenly made perfect sense.  I knew that if my mother approved of Milton flying rockets, then I certainly could do it!  I sometimes got the impression that she wanted me to be just like him since it was well known that he went to his principal’s office far less than me.

My mother said I’d have to wait until my birthday, a couple months away, in order to get a rocketry starter set with rocket, engines, and launch pad.  In the interim, she picked me up a Centuri model rocket company catalog from our local drug store.  I didn’t know it, but the local drug store had just started carrying Estes and Centuri rocket kits and engines!  Recall that model rocketry was still a fairly new hobby in those days.  In many areas, the only way to participate was through mail order.  My guess is that many retail stores and even hobby shops didn’t begin stocking model rockets until the early 1970’s and it was kind of hard to learn about them otherwise!  Boy’s Life magazine was full of model rocket advertisements, but I didn’t subscribe to that magazine until after I knew about model rockets.
To do this, Centuri devised a thin spring-contact that would be actuated by pressing a pneumatic plunger at the end of a thin rubber hose.   Theoretically, this would inflate a balloon inside the launcher, placed near the internal contact switch (this part of it was the “servo”).  A new igniter-type called the “Sure-Shot” was designed to work on three volts.  That was the theory, anyway.  The practical application was a little different and the Servo Launcher wasn’t in Centuri’s catalog all that long.  It was just a finicky system.

Getting all this to work right was way beyond me, and thank goodness, older brudder Dick, who had recently graduated from high school, was willing to assist me to get the system put together and functioning.

I was very excited for my first launch.  The rocket that came with the $10 set was the Astro-1.  I did an awful job on its assembly, hacking the fins from the balsa sheet with my dull Cub Scout pocketknife.  Die-cut balsa was still on the horizon and laser-cut wood was science fiction circa 1972.

Finally, the rocket was on the pad and ready to go!  It wouldn’t fire!  We tried again!  And again!  It was hard to tell if the balloon was inflating enough to actuate the launch switch.  The safety key was actually on the launcher itself with a light bulb built-in and hard to see in full sunlight.  You had to make sure your thumb was making a good seal by tightly covering the vent-hole on the danged plunger.  Both Dick and I invented some new swear words before we got the bright idea to put the micro clips as close to the engine as we could.
The B6-4 provided a much bigger kick than that wimpy 1/2A6-2, and the Astro-1 made some serious altitude flying on this engine.  However, at apogee, the foil shock cord mount shirked its duty in the worst way, and the parachute and nose cone separated from the rocket body.  It dove straight into the dirt, crumpling at the front end.  I still hadn’t mastered the art of parachute folding, and this turned out to be a good thing as the partially-opened parachute put the nose cone down within the launch field.

I wasn’t really sure how to deal with the crunched body tube on my Astro-1, but Dick managed to cut off the crumpled portion, which was only about an inch or so. Thanks to him, my first rocket was ready for its third flight albeit an inch shorter.  I had built my second rocket, a Big Bertha, by this time, and used the same paper slop-and-glue method learned there to re-mount the shock cord in my Astro-1.
After what seemed like minutes of scanning an empty sky, we could finally identify a tiny dot against the blue; it was round and steady, and we knew we’d had a full ‘chute deployment.  The dot lingered in the sky, finally becoming perceptibly bigger, and after what seemed like a few more minutes, I could see a fully-intact rocket hanging under a perfectly symmetrical parachute canopy. I drew a final sigh of relief when it became apparent that the rocket would land inside the field.  As a matter of fact, it gently floated down not far from the launch pad.  Dick and I were ecstatic, and our dad said he was impressed!  With the confidence and experience from this perfect fight, we pursued countless more launches that summer and in subsequent years.
Instead of causing trouble in school, I focused on physics, chemistry, and electronics and eventually took a career path in all those directions.  In the 1980’s, and 1990’s, I put my knowledge to work helping the big rockets fly, working under contract on Martin Marietta’s Titan Rocket program and Thiokol’s Space Shuttle SRB’s.

Going to work in those days was fun, as you can imagine.  In later years, I helped advance science and did my bit helping humanity through my laboratory and biomed work.

Some question the worth of the expense of space exploration programs.  For my life, their value is priceless.  Our rockets are small.  We cannot ride inside them, but by and large, I think they take us good places.