CLASSIC,  EASY-TO-BUILD RUSSIAN POST-WWII TANK MODEL RETURNS FOR THE FIRST TIME IN DECADES
ATLANTIS JS-3 STALIN TANK A303 -- MSRP $19.99 -- 98 STYRENE PLASTIC PARTS MOLDED IN SOVIET ARMY-GREEN -- LENGTH 8" (230 MM) -- ASSEMBLY REQUIRED PAINT AND GLUE NOT INCLUDED -- RECOMMENDED FOR AGES 14+
RUSSIAN TANKS IN UKRAINE:  THE STORY OF 2022
Atlantis Models has already released several 1/48 tank subjects that were previously Aurora tooling.  Back when these were first released, they were considered excellent models.  Like many other tank models in 1/48, they disappeared from the scene for many years as the industry seemed to standardize on 1/35-scale for large, detailed tank models and 1/72 for small-scale.  However, a few years back, Tamiya re-released some of their old 1/48-scale kits.  They were a hit in the industry.  Not only have more 1/48-scale tank models been re-released that have not seen the light of day in decades, a number of brand-new 1/48 tank kits have been popular with modelers.  So, 1/48-scale armor is enjoying a renaissance.  If you haven’t been much of an armor builder, Atlantis Models has provided a really good place to start with some nice kits of interesting, easy-to-build subjects at very low prices. 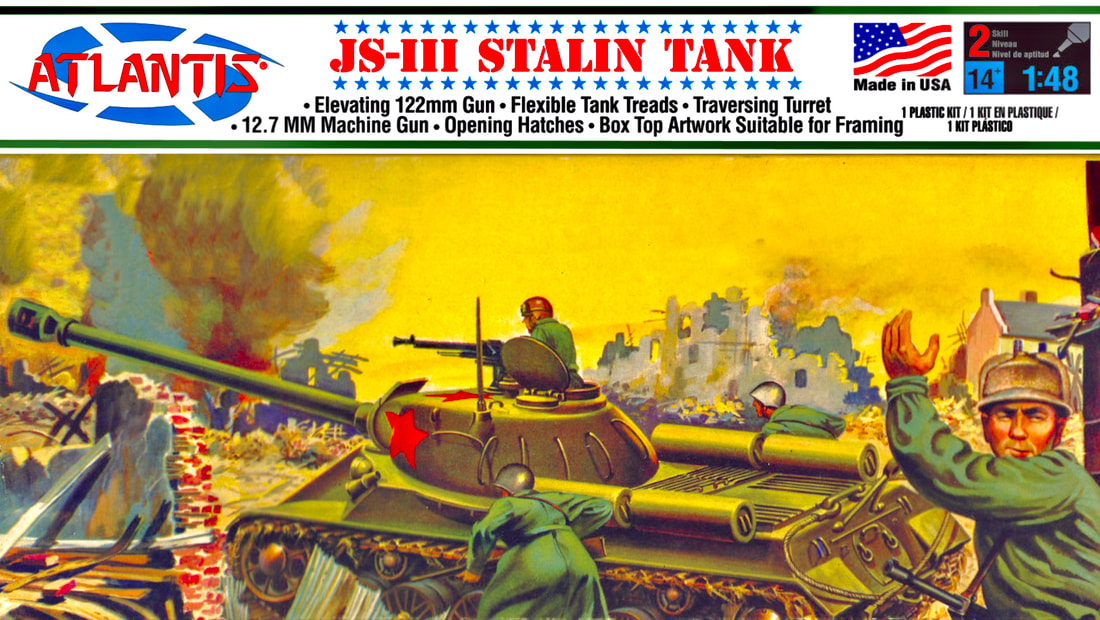 No, this is not 2022.  Russian forces in a destroyed landscape circa 1956 (original Aurora Models box art)
The JS-3 is an unusual tank.  Early examples were literally on their way to the battlefield as a brand-new weapons system when WWII concluded.  They were used in the victory parade.  A large, heavy tank, the JS-3 carried a long-barreled, 122mm gun.  This was substantially bigger than the gun in the later Patton tanks.  Over 2000 JS-3 tanks were made.  The Stalin tank is known for its bowl-shaped turret; it was the first time this design feature appeared on a Soviet/Russian tank and it became a characteristic of many Russian tanks to come.  The tank is known for its distinctive “pike nose” that was designed to deflect frontal attacks. 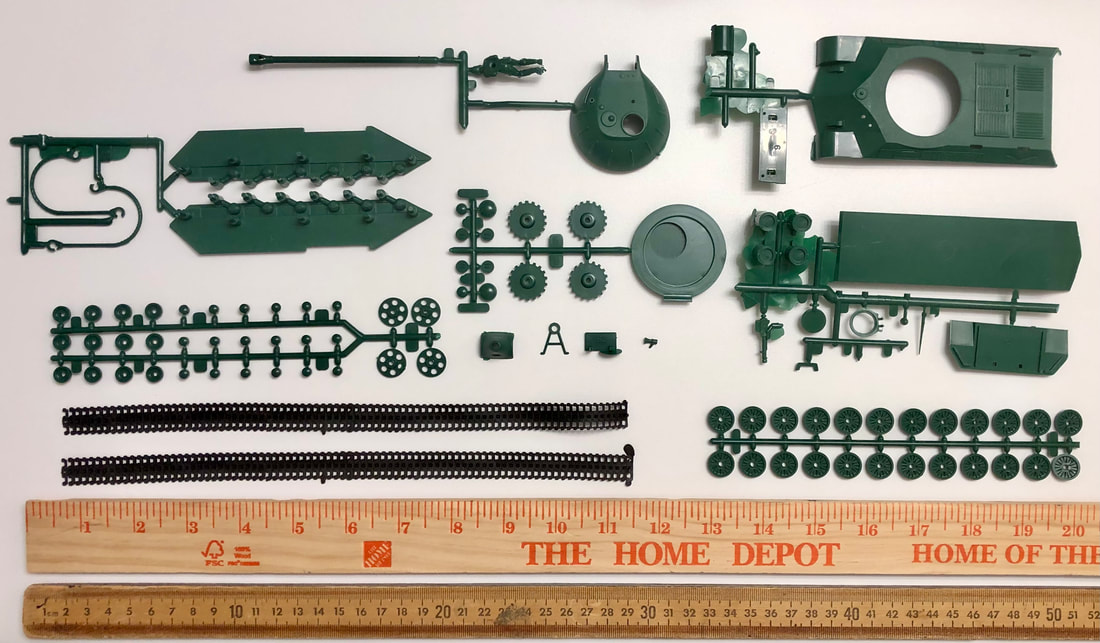 98 parts.  Length of finished model (including gun) 8 inches (over 20 cm).  Flexible tracks and seated figure included.  Wheels roll, turret spins, gun moves up and down.
Aurora came out with their model in 1956.  It was last released in 1976, so it has not been around for a long time.

Stalin's first name is interchangeably spelled in English in its Western equivalent Joseph or Cyrillic/English equivalent Iosef explaining the designations for the tank of JS-III or IS-III.  They're both the same tank.

The kit has a few sinkholes and some minor ejector pin marks.  A little flash.  Overall, It’s very well engineered.  It will be a simple out-of-box build.
Fit of the hull is excellent.  I was surprised how nicely the hull sides fit to the bottom.  It went together comparable to a state-of-the-art kit.  The original engineering was very precise.

While it will look great built right out of the box, I decided this model would be a nice one to develop my meager armor scratch-building skills.  The IS-3 had a number of grab-irons on the turret represented by ridges on the Aurora kit.  I decided to replace them with more realistic grab-bars made out of paperclips!
Many IS-2 tanks are seen with spare treads on the glacis plate.  Most tanks need to carry a few extra tread sections; these are like spare tires in a car.  On occasion, track links can get damaged and tank crews have to replace them.  On some tanks, you’ll see these spares stored on that front-face glacis.  This provides the crew with extra frontal protection.
We're impressed with this kit.  Being basic and inexpensive, it's another perfect "first tank kit" for modelers who've never tried one.  Fit of hull parts is excellent.  We really see no reason this one couldn't be a contest winner after filling seams and a few sinkholes, maybe adding a little detail, and finishing up with a competent weathering-job.  Again, this is a great place to experiment with these building techniques to develop or perfect them and you just can't beat that low cost circa 2022!
A single 2-sided page has four easy-to-follow diagrams that will walk you through building your Stalin tank.  A fifth diagram shows decal placement.

Box side with information about the real tank and kit.

On the left is a photo of a model built in "parade dress"  with white fender edges and road wheel rims.   This decor wouldn't be used in battle.  At right is an original Aurora profile painting.
The 2Modeler Guys were very impressed with this model and give it an enthusiastic four thumbs up!  Atlantis Models has an impressive and growing collection of tank models in "Just Right" armor scale, 1/48.  Why not add to your 1/48-scale tank collection or start one with Atlantis Models' 1/48 JS-III Tank kit today!

SPECIAL THANKS TO ATLANTIS MODELS FOR PROVIDING THIS MODEL KIT FOR US TO REVIEW AND ENJOY!
​
BONUS MATERIAL

In early 2022, Russia, under direction of its President Vladimir Putin, initiated a “Special Military Action” to “De-Nazify” Ukraine.  A liberated republic of the former USSR, Ukraine is today presided over by democratically elected Volodymyr Zelenskyy, who is notably of Jewish descent.  For younger readers perhaps not familiar with the conflict, it can be summed up in this “layman’s terms” description by U.S. Vice President Kamala Harris:  “So, Ukraine is a country in Europe.  It exists next to another country called Russia.  Russia is a bigger country. Russia is a powerful country. Russia decided to invade a smaller country called Ukraine.”
Flagging Russian troop morale and indeterminate tactics and execution have been cited as reasons for the stall of the “Special Military Operation.”  Photos and reports of many “Z”-bearing destroyed Russian tanks have gone around the Internet.  Russian troop casualties forced Mr. Putin to mobilize the draft of 300,000 reservists.  As a result, it is estimated that hundreds of thousands of men have fled the country in opposition to this action.  As of posting, October 2022, the cost to the Russian economy alone of this loss of Russian workforce has not yet been discussed publicly.  The resulting loss of productivity will no doubt raise the cost of goods and services in Russia, compounding economic challenges for Russian citizens along with economic sanctions that have already taken place.  At last count, between reported troop deaths and potential conscripts fleeing, nearly a million Russians have either been killed in action or fled the country.  This number reflects about 1% of Russian workers.
With a Russian economy roughly equivalent to that of Italy or the U.S. state of Florida prior to hostilities, it is unlikely that this equipment was properly prepared for long-term storage in the first place and likely did not receive periodic attention to stave off corrosion and degradation over time.  Multiple attempts at military reform since the end of the Cold War have undoubtedly been a distraction from sufficient maintenance of mothballed assets.
​SELECT HISTORY OF RUSSIAN ARMOR SINCE WWII
THE T-34
THE HEAVY:  KLIMENT VOROSHILOV (KV SERIES)
POST-WWII:  A NEW HEAVY, THE JS-III STALIN TANK
T-54/T-55 SERIES:  THE EARLY COLD WAR
FROM THE HEART OF THE COLD WAR:  THE T-62
IT'S THE 1970'S CALLING:  THE T-72
NOW AND LATER:  THE T-80, T-90, AND T-14
Post Cold War, Russia emerged from the breakup of the Soviet Union with the need to upgrade its tanks.  The T-80 was the last Cold War design dating back to 1976.  The T-90 emerged in 1992.  Neither of these types have been built in substantial numbers compared to previous Soviet Union production rates.  The T-14 has been built in prototype form with a handful of pre-production evaluation units finished.  It has been slated for high-volume manufacture.  Innovations include a completely automated, non-crewed turret.  Some analysts have stated that versions of this tank could be built that eliminate crews entirely.  Of course this technology comes at a price; with an economy roughly equivalent to the U.S. state of Florida or the nation of Italy, it is expected that not many of these tanks could be built due to the expense of the advanced technology incorporated.  Indeed, Russia has struggled to modernize its tank fleet beyond the T-72.
Building and collecting armor models is fun!  Atlantis' JS-3 Stalin tank kit is a great place to start if you've never built a tank model.  As mentioned previously, 1/48-scale was considered "lost" until recent years and many classic 1/48 tank models such as the Atlantis kit have returned and new 1/48 kits are appearing all the time.  In fact, most of the Russian tanks mentioned above can be found in 1/48-scale injection molded kits.  We consider 1/48 the "Goldilocks" scale for armor kits.  The models are just the right size--neither too large or too small.  Try an Atlantis Models armor kit today!
​
SCROLL DOWN JUST A TAD TO SEE WHAT ELSE IS GOING ON AT 2MODELER.COM--DON'T FORGET TO ADD US TO YOUR FAVORITES!