The Cessna 172 is the most successful aircraft in history with over 44,000 made since its first flight in 1955.  As a practical, economical mainstay of civil aviation, it’s no surprise that some military services saw the value of the plane for light duty and basic flight training.  Several hundred were acquired starting in 1964 and the T-41 designation was assigned with the name Mescalero added. 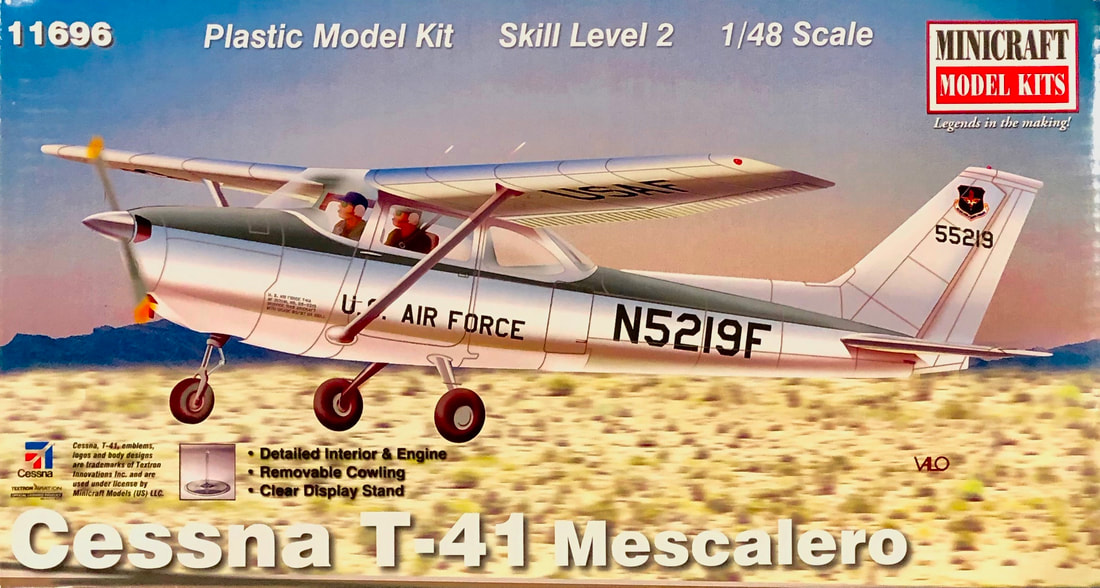 Minicraft's Cessna T-41 Mescalero, Kit# 11696, is new for 2020.  Box art by John Valo, creator of a number of iconic boxtops for Minicraft Models.
Minicraft Models makes available the best collection of civil aviation models in 1/48 scale.  Iconic aircraft from Cessna, Piper, and Beechcraft are available in premier-quality Minicraft kits.  A few years ago, Minicraft released an all-new Cessna 172 in 1/48 scale.  This state-of-the-art kit brought an accurate, detailed representation of the world’s most produced aircraft to modelers.  It’s available in several civil marking schemes of course, and also made in a floatplane variant by Minicraft.  Another interesting variation is Civil Air Patrol.  Minicraft’s newest release puts the Cessna 172 in a military uniform in the form of the T-41 Mescalero. 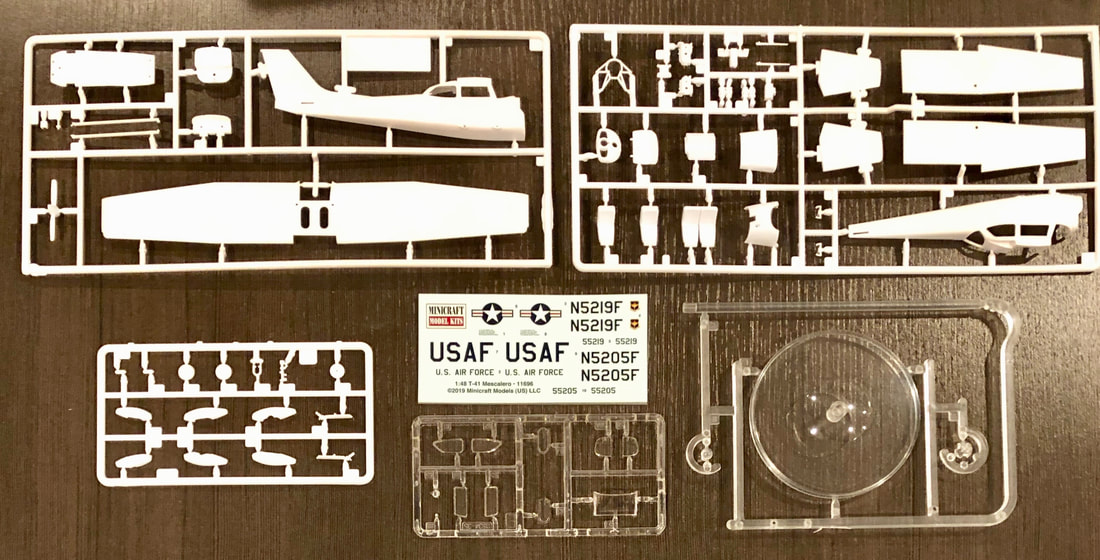 Minicraft's Cessna 172/T-41 in 1/48 scale is quite detailed with a well-appointed interior and full engine.  High quality decals and a Clear Minicraft Stand provide a choice of two different aircraft and the option of displaying on the ground or in flight.
Fuselage detail is all engraved, somewhat similar to their other civil offerings that were originally Bandai kits.

A complete engine is included along with a detailed cockpit.  Built out-of-box, this will be an impressive model.  You contest modelers will be happy to know that with that military registration, this model can compete with other 1/48 military aircraft.
Perhaps the biggest assembly trick will be finding a place to put enough ballast if you want your model to sit on its landing gear without being a “tail sitter.”  By far the simplest solution is to simply use the included Clear Minicraft Stand to display the model.  With the model depicted in-flight, there will be no need to worry about ballast since the model will reside perfectly balanced on its Minicraft Stand.
If you do decide to set the model on its fixed landing gear, we’d recommend filling the engine itself with as much lead weight as you can pack in there.  For the rest, hide it underneath the instrument cowling (part 30) with as much of it packed up against the engine interior side of the bulkhead (part 12) as needed to make the model sit on its nosegear.  Glue the wing parts together, and tape the rest of the larger parts of the model together with the interior pan in place; this should give you an idea of how much weight you’ll have to use in order to keep the model tipping towards the nose gear (your balance point will obviously be where the main landing gear is mounted).

Schemes for your choice of two aircraft from the 1960's are included.
Note that the kit comes with separate spats to cover the landing gear.  These were intended by Cessna to improve fuel economy on the real airplane.  Civilian owners appreciated them for the increase in range and fuel savings they provided.  The military services that purchased the T-41 didn’t seem too interested in the cost savings these parts created, so they will be left off your T-41 model.
Instructions are comprised by an 8-page booklet!  We included some pages to show interior and engine details.  It really is an impressive kit that won't be too difficult to build.
This is not a complex model, but it would be a good idea to have a few model kits requiring glue and paint under your belt before you attempt Minicraft's T-41.  There are some small parts and beginners might get a little frustrated getting the fuselage closed up with all that interior and engine detail.  More experienced modelers will have an easy time and will be delighted with the level of detail, fit, and general engineering of this model kit.

The 2Modeler guys love this model and give it an enthusiastic four thumbs up!  It will be right at home in your collection of either civil or military 1/48 aircraft!

We'd like to thank Minicraft Models for providing this model kit for us to review and enjoy!