A rhythmic rustling gradually gains in intensity.  The distant swooshing coalesces into the sounds of snapping limbs and falling trees caused by giant footsteps.  Your blood runs cold as you realize the noise is coming toward you.  A mighty roar rips the jungle.  KONG HAS ARRIVED!

SYNOPSIS:  ATLANTIS MODELS BRINGS BACK THE CLASSIC AURORA KING KONG FIGURE KIT WITH GLOW-PARTS IN ITS BEST-EVER INCARNATION.  OLD MODELERS – NEW MODELERS – COLLECTORS – ALL WILL HAVE PLENTY TO LOVE HERE!

During the years of early cinema, audiences thrilled to seeing film of exotic locales.  Movies with a safari theme and wild animals with exaggerated features and dimensions were common.  It was this setting that created the legend of King Kong and the landmark 1933 film became one of the most popular and enduring movies of all time.  In fact, some refer to it as the most beloved horror movie ever made.  A reinterpretation by Dino De Laurentiis in 1976 and remake in 2005 by Peter Jackson were both very popular, demonstrating that the appeal of King Kong is still going strong as the 100th anniversary of the first film approaches.
The glow-in-the-dark parts sprue has duplicates of some of the parts that can be found on the regular brown sprue.  The head and feet of the figure are on the glow-sprue only, so if you want your King Kong to be a non-glow version, you’ll have to use some brown paint.  Interestingly, Atlantis’ Godzilla model (available separately) can be built without using any of the glow-parts that come with that kit.  The two models differ in that regard.
Like Godzilla, the base to King Kong is like a kit unto itself.  Lizards, snakes, and broken palm trees—stuff that would make your mother nervous—are included!  A nice nameplate is there as well.  No proper model of King Kong would be complete without a female figure in his grip and that is included as well.
Whether or not you plan to use putty, some sandpaper, both fine and extra-fine grits should be helpful to smooth some seams and areas where the sprue attachment points need to be removed.  A hobby knife to remove part from the sprue and trim off a small amount of flash, or the excess webbing that oozes out of some mold seams, will be helpful.  If you’ve built at least a couple other glue-kits, you shouldn’t have any trouble with this model; the instructions are good with diagrams and descriptions in English (they are a reproduction of the instructions from the original 1963 Aurora kit and are vintage art in themselves). 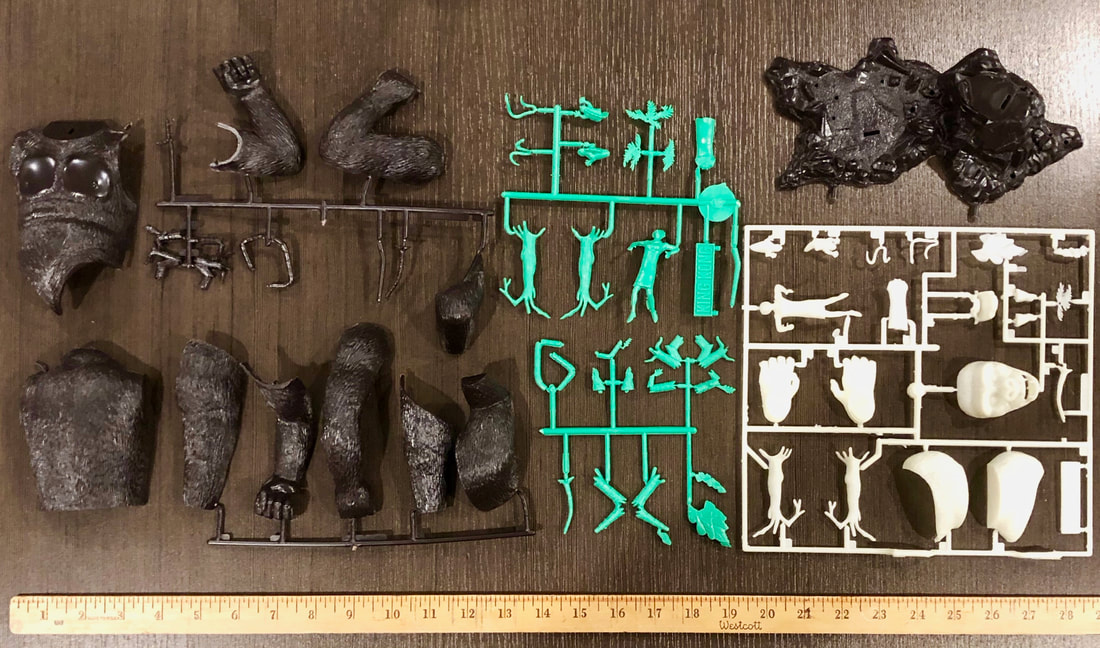 The Kong figure and base are molded in dark brown plastic.  A green sprue has foliage and the female figure; you'll want some paint, otherwise she'll look like a katydid.  Note the glow-sprue.  Most are duplicates of parts found on the green sprue.  It's important to point out that Kong's head and feet are only found on the glow-sprue.
We love the color combination that Atlantis chose to duplicate the original kit.  It’s high-quality stuff and does a great job of reproducing the feel and vibe we remember from 1963.  The glow-plastic provides a spooky green light as well!  As always, Atlantis checks their molds carefully before production to make sure the parts fit as well as they can and they provide a quality product.
Aurora Models is remembered for its exceptional monster figure kits and this was one of the very best.  Parts for the King Kong figureand some of the tree trunks are molded in dark brown plastic.  Note that Kong's head and feet aren't here - they're part of the glow-sprue!
If you already have Atlantis’ Godzilla kit, King Kong will make a great companion.  We’d recommend that you check it out if you haven’t already.  You can stage your own “Kong vs Godzilla” showdown on your model shelf!
Our photo of the glow-parts was taken after "charging" them under a lamp, and we shut it off and took the picture right away with an old iPhone camera.  The plastic has a bright, ghostly glow!  Two views show the height and terrified expression of the female figure.  Will you paint your figure's dress red like the box art, or white like in the movie?
In a Skull Island coconut-shell, Atlantis did a fantastic job bringing this kit back and we give it four enthusiastic thumbs up!  We’d like to thank them for providing a kit to us to review and enjoy!
Instructions include a detailed story of King Kong.  Diagrams and text (in English) tell in simple fashion how to assemble King Kong.