KIT# L3800 – 13 PARTS – MOLDED COMPLETELY IN CLEAR STYRENE PLASTIC – MSRP $US21.99 – AGES 14 AND UP RECOMMENDED BUT YOUNGER KIDS SHOULD HAVE NO TROUBLE BUILDING IT – PERFECT FOR SCHOOL ASSIGNMENTS OR SCIENCE FAIR PROJECTS– PAINT AND GLUE NEEDED FOR ASSEMBLY NOT INCLUDED 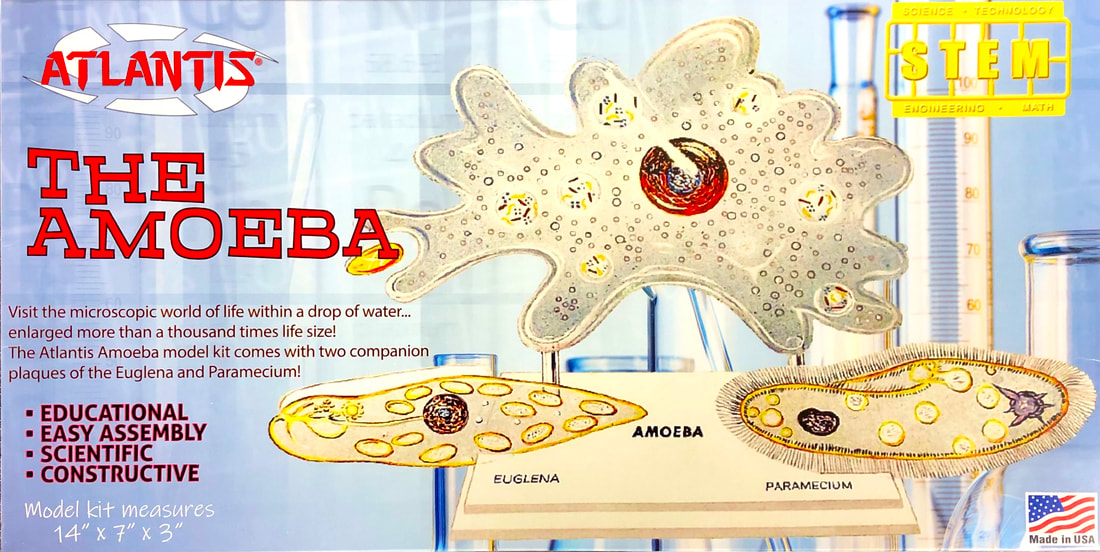 This kit is actually a 3-in-1 model kit with the large Amoeba and smaller euglena and paramecium.  A clear base is included.  All three protozoa models are removable!
The plastic modeling hobby grew like wildfire throughout the late 1950’s and was white-hot during the early 1960’s.  By this time, it was easy to find multiple kits of favorite cars, planes, and ships like the Chevy Corvette, P-51 Mustang, and USS Missouri.  Many manufacturers took risks.  Some failed and some, like Aurora’s monster models, succeeded far beyond anyone’s expectations.

During this experimental realm of the hobby, a few model kit makers decided to try some educational subjects.  An example of a big success was Renwal’s Visible Man.  Visible Man was so popular that The Visible Woman followed and additional subjects were given the styrene X-Ray treatment.  The trend very nearly went to extremes with Visible Trout and Visible Cow among the more unusual examples.  Decades later, perhaps the strangest of them all, a reimagined Lindberg Corporation released the Visible Alien! 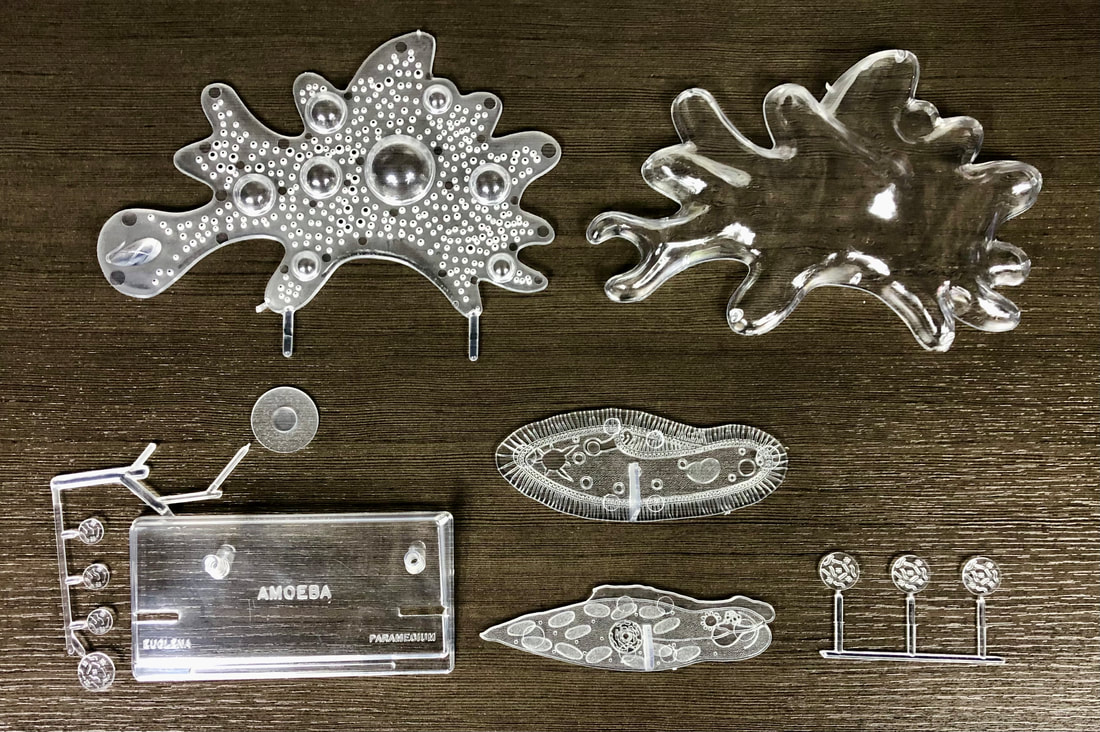 Just 13 clear styrene parts make up the kit.  All round pieces are part of the amoeba.  The two smaller protozoa (paramecium and euglena) either fit on the stand or can stand up by themselves.
In our house, we had Visible Man and Visible Head.  Both these kits nudged Brudder Dick in a medical science career direction.  I got my own chance to build a Visible Head in a junior high biology class and since then I’ve had an interest in the various educational and anatomical model kits that are out there.  Fun with such models eventually inspired a multifaceted engineering career and I've been involved in biochemistry research including microbiology!

The Amoeba was first released in 1963 by a company called Superior Plastics.  In our bonus features, we’ll show more of what this company offered; they certainly had a number of unusual model kits!

Circa 1973, Lindberg received the molds and released the kit again.  It wasn’t available for nearly a half-century after that.
​Atlantis’ Amoeba kit has three organisms represented.  The Amoeba is in two halves with separate nucleus and food vacuoles.  The finished amoeba sits on a clear stand and the smaller protozoa fit in slots on the side of the stand.

Atlantis recommends this model for ages 14 and up.  But it’s really a simple model and kids younger than that should be able to handle it provided they can responsibly handle tools (razor knife), paint, and glue required to build it.  Any child at or approaching junior high school age (11-14) should have no trouble particularly if a parent is nearby to provide assistance or supervision.

An interesting aspect of the English-only instructions is that they utilize mostly written text for assembly.  It’s not like anything is complicated here; there is an overall assembly diagram and the text describes what to paint, but younger kids might appreciate it if Mom or Dad can help interpret the written instructions to help with the painting.  This is the sort of model that should be pretty easy to  build in an evening or two with most of the work involving a little hand-painting.
The other suggestion is a painting technique.  If you paint the backside of all the parts where painting is specified instead of the front, any brush strokes or slightly uneven spots will be invisible from the front.  Most microbes appear to have translucent parts, so why not consider using translucent paints such as Tamiya’s clear color acrylics.  Regardless, paints specially designed for model kit plastic should be used.  They should be easy to find at craft or hobby stores.
If you decide to paint the base, paint the bottom surface!  Your color will show through looking much smoother and shinier than if you painted the top surface.  You could carefully paint the tops of the lettering to provide a nice looking base in short order. 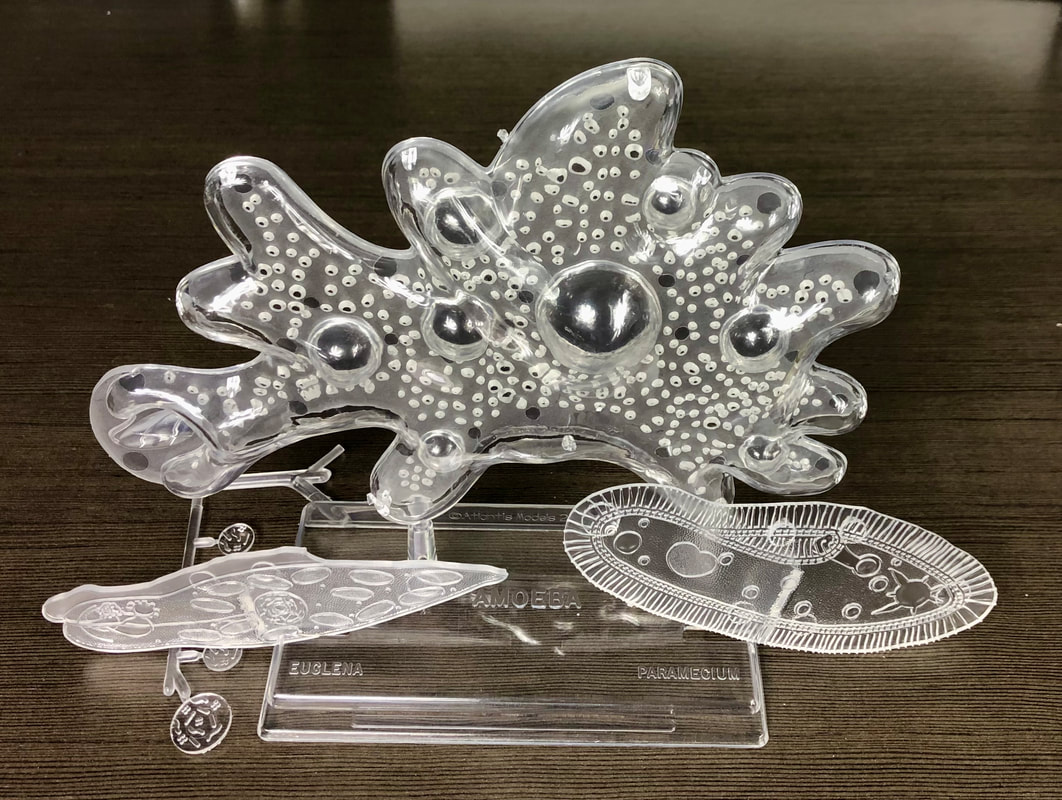 Here's a simple dry-fit of the major parts.  The model is a pretty good size; 14 inches across and 7 inches high!
This model might make a great gift for a young person who is considering or embarking upon a career in biology or medicine.  Most basic biology courses begin with the study of single-celled creatures as many of their components work the same as the cells in our bodies.  This kit will be helpful for anyone wishing to learn more about basic animal organisms.
BONUS FEATURES

MORE ABOUT AMOEBAS AND THEIR POND WATER PROTOZOA PALS
Amoebas (or amoebae) have been referred to as simple creatures because they are single-cell organisms.  The human body has about 200 different types of cells and some sources state that 100 trillion cells is a good place to begin guessing the total numbers of cells in a human body with about a quarter of that amount being red blood cells alone.
Every couple days or so, an amoeba simply splits in half, thus reproducing itself.  Instead of a plumbed-in stomach like we have, it uses food vacuoles, which are like little butlers that move around serving various parts of the cell with meals and removing waste!  If an amoeba is partially eaten, so long as a small portion of its nucleus survives, the amoeba can completely regenerate itself, assuming a complete set of genes is still there.
I recall introductory classes in biology during junior high and high school.  Normally, plant science is where the concept of cells is introduced and from there, single-celled creatures such as amoebas are where the study of animal cells traditionally begins.  Different components of these cells are studied and basic biological concepts such as respiration, ingesting and digesting food, excreting waste, and reproduction are learned.  One doesn’t need to study this for long to be amazed at the complexity and beauty of these so-called simple creatures and quite often, we encounter some version of the statement, “we don’t understand exactly how or why this works the way it does.”  It’s here where we often contemplate our spiritual and intellectual beliefs to come up with the answers that satisfy us and of course our minds are inspired to pursue more on the subject.

A model kit like Atlantis Models’ Amoeba is a great place to expand our minds regarding the so-called miracle of life while engaging our hands and creativity!
MOVIE STAR AMOEBAS
The amoeba is known for its ability to change its shape dramatically and “ooze” its way along using pseudopods, or “fake feet.”  The notion has had a little attention from Hollywood over the past; not nearly as much as “monsters” with defined body parts, of course.  Let’s take a look at a pair of examples.

THE BLOB
The Blob was a very low-budget affair produced by Jack Harris, a film distributor who wanted to break into film production.  He convinced Valley Forge Films, a company specializing in Christian films based in Pennsylvania, to produce the feature on a famously meager $110,000 budget for a 1958 release.  Harris cast a then-unknown Steve McQueen in his first starring role.  McQueen famously turned down a percentage of profits for a $2800.00 one-time check.  McQueen needed the quick money and left behind what would have become at least $400,000 had he waited a little.  This was ten percent of the 4 million dollars that the hit movie quickly made which was his other contract option.  McQueen still ended up doing just fine!  Burt Bacharach wrote the music to the tongue-in-cheek opening Blob theme and the song became a minor hit in the USA!
One of the really interesting things about The Blob was its ability to sense and pursue food; in this case some number of disbelieving small town folk played by jovial, underpaid actors and extras.  Real amoebas actually behave in this manner.  Dismiss the movie if you like for its lovable schlocky attributes, but the intellect and motivation of The Blob seems pretty much like the real thing, albeit on a much smaller scale.

The Amoeba was first made by a model kit company called Superior Plastics in 1963.  This company made a few other models; each of which was far more unique than the usual airplane, car, or ship model.
Model kits of the Taj Mahal and the United Nations complex in New York City were available as model kits thanks to Superior Plastics!  Unfortunately, they didn't have any big hits and the company got out of the extremely competitive model kit business.  Eventually, Lindberg Models got some of their tooling.
MORE EDUCATIONAL KITS

Atlantis Models has many Renwal molds and we're happy to see them re-releasing a number of previous Renwal subjects that have not been available in many decades.
Visible Man had many releases over the years and passed through a few different companies.  The kit was last sold just a few years ago by Skilcraft.  This company apparently no longer makes educational products; nowadays, it specializes in producing adaptive products for the blind.

VISIBLE MAN AND VISIBLE WOMAN AS SEEN ON TV

Visible Man and Visible Woman were used as props in the British TV sci-fi series, Space: 1999 which was on TV from 1975-77.  This series was known for its spectacular special effects including some very cool spacecraft models.  Spoiler:  There were lots of explosions!
A BIG FINISH - BIG EDUCATIONAL KITS
In the 1950's and 60's, model kit companies weren't afraid to take big risks with some big models and U.S. Capitol and The Renwal Cosmorama are two good examples.  Marx Toys was experienced with large plastic pieces thanks to their many toy products and they tooled a Capitol building in 1/160 and The White House in 1/48.  Glencoe models re-released these.

The Cosmorama could project the stars and constellations on the inside of a large, white dome.  You could pick any location on Earth and any time and date, and the Cosmorama would show you what the stars would look like there.  This model sparked a strong interest in astronomy for both Dick and me.  Dick actually modified his star projector sphere for accuracy, adjusting the brightness of some stars and even adding a few that weren’t originally included.
This kit came in a large box and was composed of a number of very large moldings including the dome parts and console.  It retailed for $20 in 1963, which is around $200.00 today.  Examples showing up on eBay are bid to some rather outrageous amounts!  We took diligent care of the Cosmorama, but our mother quietly disposed of this amazing model when we weren’t around without telling either of us.

ATLANTIS MODELS PROVIDES A RANGE OF EDUCATIONAL KITS TODAY--TRY THEM ALL!
Like the model kits we've discussed here, Atlantis Models' educational kits combine plenty of  building fun with an educational experience!  The aircraft engines have moving parts that show just how the real thing operates.  Enjoy them for yourself or give as a gifts to someone you love!
​

SCROLL DOWN JUST A BIT TO SEE WHAT ELSE IS AVAILABLE AT 2MODELER.COM!  KICK BACK YOUR FEET AND STAY AWHILE!