​Atlantis Models has brought back another modeling classic!  Mr. Gasser was the first wacky Ed Roth model kit created from one of his cartoons in 1963.  Check out our article on this and other such kits from the 1960’s elsewhere on the site.

Mr. Gasser was last released by Revell around the turn of the century, but it had become somewhat collectible and prices were inflating at such outlets as eBay.

Atlantis Models apparently now has the molds to this classic, and they have had no problem getting the licensing to re-release this kit with its original box art.  Pricing at my local hobby shop was about 25% less than what you would expect to pay if this were a new Revell release.  At only $21.99 list, this kit's a bargain!

Atlantis produces its kits in the USA.  This one is molded in white friendly-to-paint styrene.  Two metal axles and decals are included.  This is another classic that I just had to start once I’d opened the box, so I’ll update this review as the model progresses.
​This is the second classic Revell kit released by Atlantis that I’m working on, and I must say I’m impressed with how Atlantis is executing these kits.  I had very low expectations for this one due to its age and vintage, but like their B-24, either the molds have aged well, or Atlantis has done some cleanup on them.  There are certainly a few gaps that will need your favorite filler, but nothing too egregious.
Sinkholes in the plastic are minor, and ejector pin marks will not bother anyone but the most fastidious contest modeler.  I don’t think anyone buys these old kits expecting them to fall together out of the box, but this one actually comes pretty close considering its vintage.
​It won’t be a lot of work to clean up parts and finish this model.  Perhaps most challenging to the modeler will be the painting since a number of colors will probably be required with either plenty of masking or a steady hand with a paintbrush.   The modeler will want to try some weathering to enhance details.
​
If you like Weird-ohs or Ed Roth’s monster kits, you’ll be happy with this kit.  Dem Brudders give it four thumbs-up!

We'd recommend these "cartoon kits" as a place to begin if one is interested in learning how to build historical figures.  Messing up things like weathering faces and clothing won't be such a big deal here, and mistakes made won't detract much from the cartoon nature of the kit.  Newfound expertise and confidence built here, frustration-free, can then be utilized on that expensive resin figure kit of Washington Crossing the Delaware, or whatever. 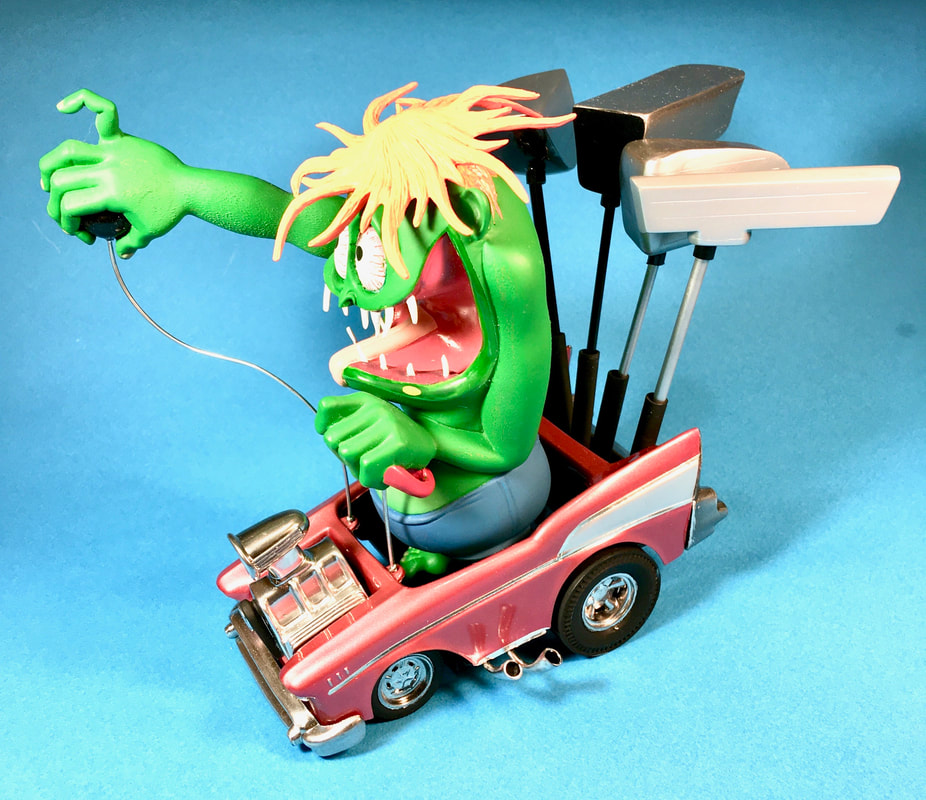 Dick put some time into the car, treating the build like a model car with an Alcad finish and Bare-Metal foil on the chrome bits and glossy metallic red for the body.  The trunk lid was cut off and the golf clubs were scratchbuilt.
The golf clubs in-progress.  Dick has given Mr. Gasser a variety to handle just about any cartoon golf course.
B)  Beyond the Kit:  Mr. Gasser was first released in 1963, helping to kick off the "Weird Ohs" craze.  It sold well enough that a series of other crazy Fink figures with cars followed, such as Mother’s Worry, Drag Nut, and Robbin’ Hood Fink.

In 1999, I picked up Mother’s Worry and Robbin’ Hood Fink on clearance at the old Kaybee Toys outlet store.  Each of the Fink kits had a different theme; Mother’s Worry drove a T-bucket hot rod and Drag Nut was similar.
Robbin’ Hood Fink was different; the figure in this kit was a Wild West bandit (complete with bullet holes and a broken hangman’s noose).  Robbin’ Hood’s ride was none other than Ed Roth’s first custom car, the Outlaw.  This was no bare-bones caricature of a car, however; it included most of the plastic from Revell’s finely detailed Outlaw show car kit.  This model has a fully rendered engine complete with internal crankshaft detail and heads with cylinders visible.  Few manufacturers include such detailing in state-of-the-art kits released today.  Instead of the regular kit’s wheels, cartoon versions of the wheels were included, so it wasn’t quite possible to build a stock version of Outlaw with that kit.
The Mr. Gasser figure was very close to the box art and in my opinion, he seems to have the happiest expression of the car-fink monsters--it appears that he enjoys his automotive mayhem more than the others.  I regretted not picking up a Mr. Gasser during the release around the year 2000, and he was getting hard to find until Atlantis announced their re-release.
One of the more attractive aspects of these kits is license to customize.  A modeler can duplicate the box art colors chosen by Ed Roth as their tribute to Roth’s original drawing, or they can go nuts with their own color pallet.  A good example of this is Dick’s interpretation of Angel Fink as an aging, tie-dyed hippie.  Back in the day, Pactra had a paint set of “monster colors.”  Circa 2020’s, the modeler has a wide array of paint choices and there’s nothing stopping them from custom-mixing colors for a unique scheme.

Circa 1963, some parents were made very nervous by the thought that their kids would want these crazy monster models.  Perhaps a notion that they might instill depravity in the kids who built them perpetuated the mania caused by these kits and helped build their popularity.  I guess we survived them--more or less.  Over half a century later, they are remembered and still available.