Have you seen our YouTube video review and 2001 parody on this model?  Check it out if you haven't already!  It's the biggest project we've ever done.

CLASSIFIED MISSION BRIEF:  AFTER NEARLY HALF A CENTURY, A MODELERS' MOST-WANTED-SUBJECT APPEARS IN STYRENE PLASTIC FOR THE FIRST TIME.  WHILE NOT FOR THE FAINT OF HEART, THIS KIT SHOULD BUILD INTO A PERFECTLY SATISFYING MODEL OF THE ICONIC SPACECRAFT FROM 2001: A SPACE ODYSSEY.  IT TOOK A LONG TIME - BUT THEY GOT IT RIGHT!
NOTE:  THIS REVIEW COVERS THE LARGER 1/144-SCALE DISCOVERY KIT RELEASED BY MOEBIUS MODELS IN 2017.  IF WE GET A CHANCE, WE'LL REVIEW THE NEWER, SMALLER 1/350 MODEL KIT RELEASED MORE RECENTLY. 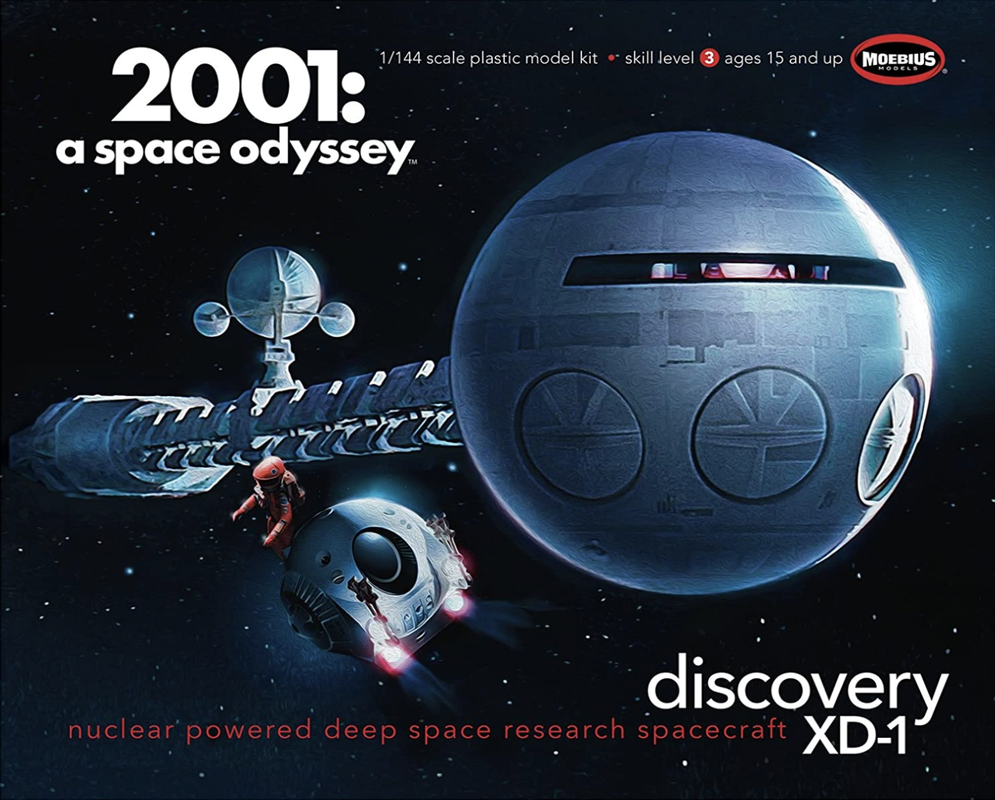 With a cited length of 41 inches and 1/144 scale, Discovery scales out at about 500 feet.  Coincidentally, that’s about how many parts the kit has.  The kit is engineered with 16 styrene plastic sprues plus a front viewport transparency.   Several metal rods are included for a stand and to provide reinforcement to the lengthy, thin structure of the model, which runs heavy at both ends. 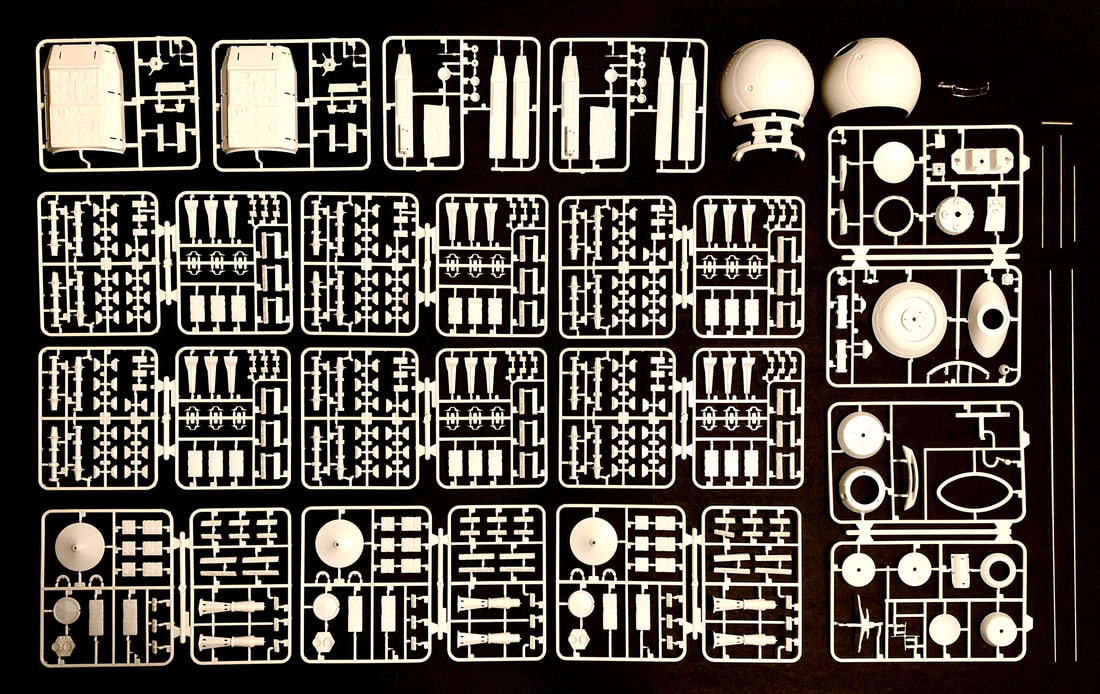 Just shy of 500 parts comprise this kit.  Two sprues on the right are the unique parts.  Two pairs of two identical  sprue sets are at top.  A three-sprue set is at bottom right.  At middle-left are six identical sprues, most of which comprise the central spine of the model.
To minimize tooling costs, a number of repetitive parts were engineered on multiple sprues.  Two larger sprues contain the unique parts (where only one of each piece is needed for the model).  There are two sets of sprues that come in pairs; the rear propulsion section top and bottom are identical and there are a number of other parts that have pairs (the two smaller dish antennae on the AE-35 antenna array are examples).
Three round stand bases are included in a trio of identical sprues that also has pod bay doors and engine nozzle sets.

Most of the parts are found in a set of six sprues that are the same.  Cargo module ends, spine parts, and the hexagonal surfaces to the engine nozzles are found here.  You will spend A LOT of time in the center of the model.

Here's a closeup shot of the two-sprues sets.  Most of these are for the reactor module housing.  On the left sprues, you can see two "X" structures that are the antenna horn mounts for the auxiliary antennae to the AE-35 Antenna array.  The larger circle on the right sprues are the antenna dishes themselves.  Those small discs are what appear to be escape motors!
Sprue #16 has the command module halves.  One of the halves is removed; otherwise, the parts would definitely not fit in the box.  Moebius is known for tightly packing their parts in boxes; if you want a fun challenge, try putting the sprues back in the box after your initial kit parts  inspection and having the lid close. 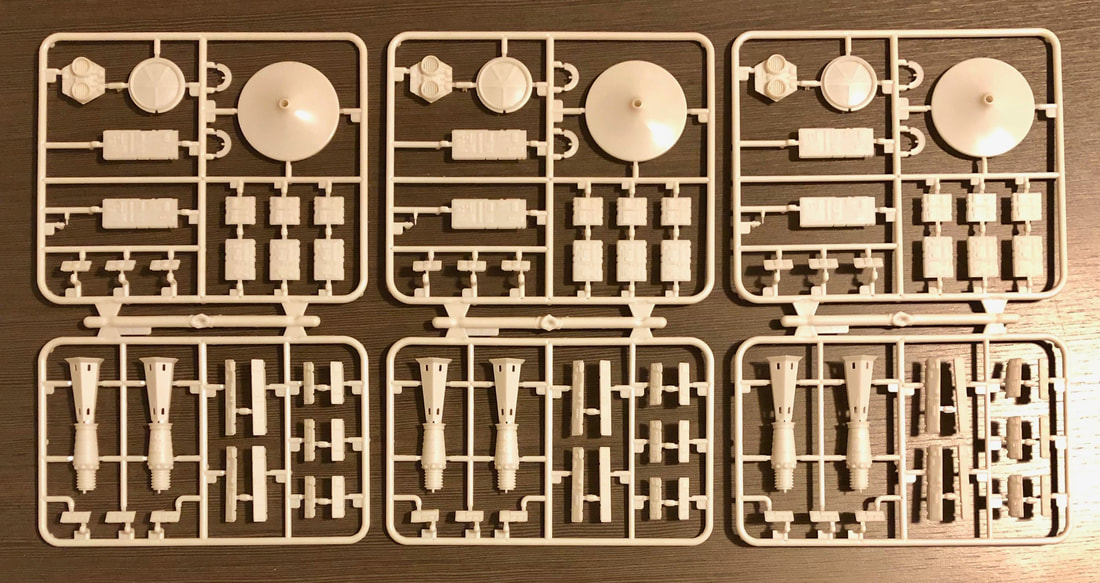 This trio of sprues has parts on the Discovery that appear in triplicate, such as the Pod Bay Doors and thruster stacks.  Those long engines look an awful lot like actual particle accelerators built in the 21st Century.  The three short metal rods fit in the round bases (top right on each sprue).  Two cradles and a cup are included that support the ends and middle of the model.
An eight-page instruction manual has very clear and well-written instructions.  Most of your work will center around what they refer to as “cargo modules.”  I’d like to think of them as consumables modules.  In the bonus material, I’ll add my two cents to the interpretation of the parts to the fictional Discovery spacecraft based on my career experience in the nuclear industry and with particle accelerators since there appears to be a lot of overlap in what I see on the fictional Discovery and what I encountered in the industry.
The kit does not have an interior.  Adding one would certainly have pushed the cost of the kit  above its $200.00 MSRP.  Resin sets are available for those modelers who will certainly wish to include a pod bay in their build.  Discovery had no external lighting, but the command module window and open pod bay (you’ll have to cut the doors yourself) should be easy to light since the command module will have plenty of room.
Detailing is sufficient for the scale.  The “Greeblies” that were on the studio model are well-depicted here.  Plastic is light/gray/off-white, so you’ll want to plan on white or light gray paint depending on your preference.  The studio model was light gray.  It’s very difficult to photograph a white model, so special effects models will almost never be that color.  After printing and processing, however, the on-screen colors of a science fiction ship will almost always appear different than the effects model. 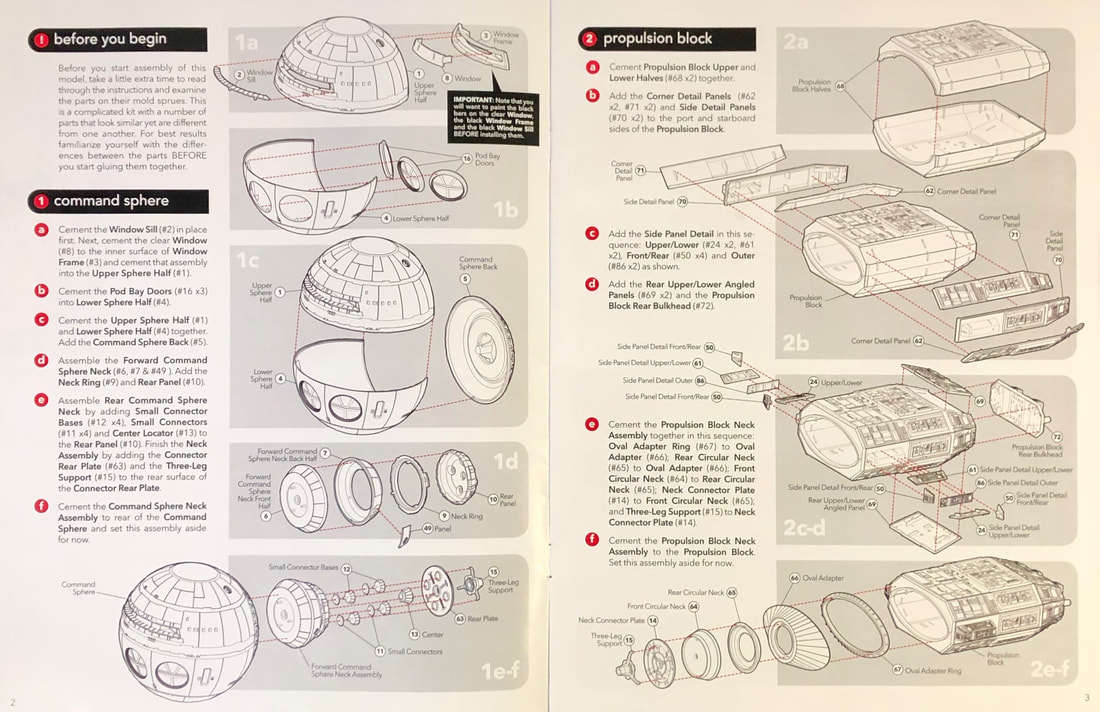 Two of eight pages in the instructions.  Moebius always uses glossy brochure-grade stock for their instructions.
The special effects model work for 2001: A Space Odyssey was done in-camera, meaning there was very little process work needed (no compositing multiple images like was done extensively in Star Wars).  The camera shots for the Discovery were metered so that the highlights on the model appear white and my first model will get a white overall finish to reflect my interpretation of what I saw on the movie theater screen for the first time so long ago (my second model will be coated with dingy-yellow "sulfur" as seen in 2010:  The Year We Make Contact).  A little judicious weathering to enhance that great panel detail on your model will go a long way in creating what should be a spectacular result! 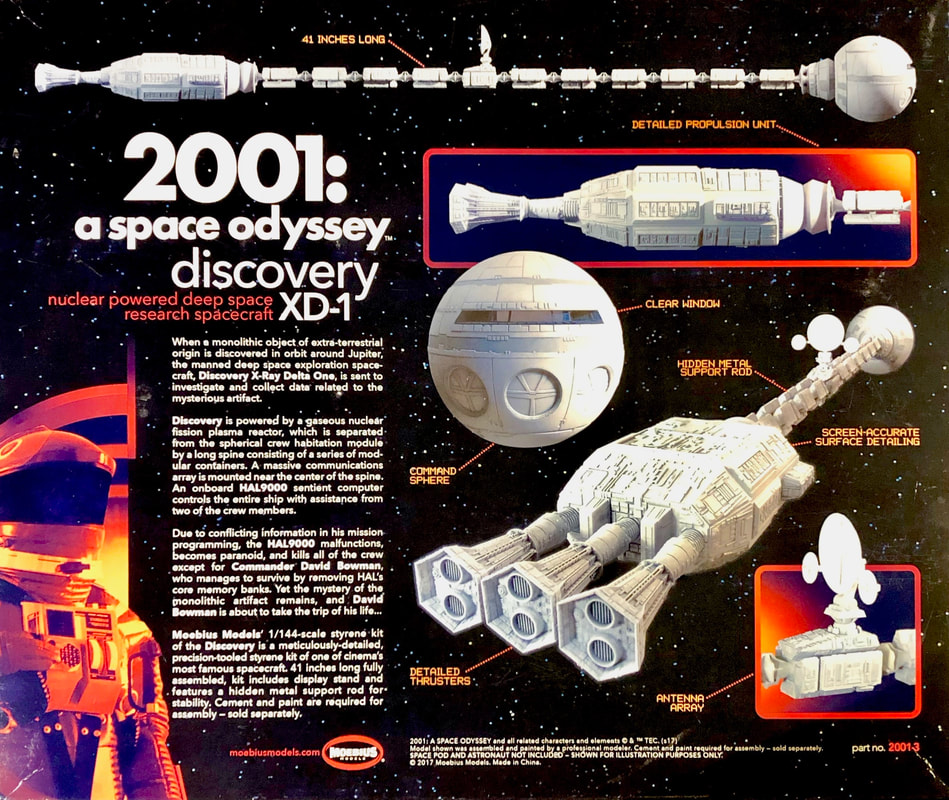 Traditionally, the bottom of a model kit box was blank space.  Moebius shows a photo of a built model and provides FOUR paragraphs of enticing text!
Dem Brudders give this model a resounding four thumbs up!  It's not for beginners.  But we don't anticipate any headaches with the build as Moebius' model kits get better and better in their technical execution with every new release.  It was a long time in coming, but the wait was worth it after our grand tour of what's in the box.  I don’t pony up $200.00 for a model kit easily.  But I am thrilled to have one finally, and I’ll probably pony up for the new, smaller 1/350 version of Discovery as well!
​
BONUS MATERIAL
This article is a work in progress.  We have additional content inbound about the model and the movie!  Stay tuned!
Here's some screen shots from our most insane project yet--an 8-1/2 minute kit review of Moebius' Discovery XD-1 that contains many parody elements!  We released it 10 February, 2021.
As mentioned, Moebius' Discovery XD-1 is a big model at 41 inches long and 500 parts.  The kit has been popular with modelers!  Recall that in 1969, Aurora Models followed up their Orion Space Shuttle from 2001 with the Moonbus.  It was a more ambitious effort; bigger that the Orion with many more parts.  It was a flop--as a poor seller, it was discontinued in Aurora's catalog, putting an end to any additional kits from the movie, 2001.  Just the opposite has occurred at Moebius Models, long after the actual year, 2001, passed into history!  Following up the Orion and Moonbus kits, Moebius mounted an all-out effort to create their 1/144 Discovery XD-1 and it was well-received enough by modelers to justify not only additional kits--but a second version of Discovery!

In 2020, Moebius released a simplified version of Discovery in 1/350 scale.  At 17 inches and 200 parts, this version of Discovery is easier to build and easy on the pocketbook.  Additional kits from the movie are inbound!
​YOUR PERSONAL ODYSSEY--WHY DO YOU LIKE 2001: A SPACE ODYSSEY?
My father took me to see 2001: A Space Odyssey while we were on vacation a year or so after the movie originally debuted (spring, 1968 in the USA).  He’d read the book and had heard the film was well-done.  I was still single-digits in age then.  Knowing that we weren’t going to see a movie that followed conventional filmmaking mores of plot and dialogue, he presented me with a good synopsis of the book.

Ten minutes in, I wondered if he had taken me to see Planet of the Apes by accident.  However, after the famous Two Million-year Jump Cut, I was treated to a sensory experience that by far I had never before experienced in a movie theater.  Delighted by realistic images of spaceflight and terrified by the screaming monolith, I was set on the path of my later life’s journey that took me into the world of technology and the inner space of the atom.
I managed to acquire a resin space pod kit, but the 54-inch resin Discovery kit from Lunar Models remained elusive for many years, either from cost or availability issues.  Around New Years 2018, Moebius released their 1/144 scale Discovery XD-1.  I ordered one as soon as I possibly could, paying list price ($200.00).  While I have purchased a handful of models costing over $100, this was the first time I ponied up for one in this price range.
After its early efforts, Moebius came into its own with spectacular models of spacecraft that excited even the pickiest modelers.  For example, I was high school age when Monogram Models released the Battlestar Galactica.  This was a major kit at the time, more than just a simple desk model.  At eighteen inches long, it rivalled the original AMT Starship Enterprise in size.  When I first saw that giant box, I had expectations that the greeblies would have their own greeblies, just like the studio model.  With a groan and an “Oh well!” that matched the first time I opened the MPC/Airfix Space 1999 Eagle, I knew that what was in the box had some serious concessions to economy to make that model as cheap to manufacture as it could be.  Monogram’s Galactica had plain, slab-sides devoid of detail.  Shapes were close, but not quite right.
Brudder Dick and I had the privilege of meeting Adam at the IPMS Nationals in Phoenix, AZ in August of 2018 and we attended an amazing seminar he presented.  Adam said that enough information was obtained from Fred Ordway’s materials and movie stills to design a Discovery model that is quite faithful to the film.  A surprising number of modelers I know agree.  Moebius’ Discovery has been successful enough that additional kits from 2001 have been released, and more are currently in development!

We'll post more information about Discovery - the fictional ship and the model!  Check back again soon.