First off, this kit is from their collection of the old Aurora company molds.  Aurora went bankrupt in the late 1970’s and much of their tooling was purchased by Monogram.  Monogram merged with Revell in 1986, and when Revell’s assets were liquidated after the failure of then-owner Hobbico in early 2018, a portion of their older tooling inventory, including many Aurora kit molds, was purchased by Atlantis.  Atlantis makes their kits in the USA.
The Gist:  Vintage Aurora kit unearthed.  Lots of bang for the buck.  Probably one of Aurora's better aircraft kits.  Great for youngsters, collectors, or those who are willing to work just a little to produce a nice model of this aircraft.
The 1/72 kit is molded in a dark olive-drab plastic with a sprue of clear window pieces for a total of 85 parts.  Airframe length is 11.25” and rotor diameter is 10.25”.  There is no stand included.

The first thing one will notice upon opening the box is that the airframe surface is smooth; Aurora generally did not festoon their aircraft kits with rivets like Revell.  This is the key tipoff that it’s not the Revell kit.  In its early years, Revell was well known for intricate detailing that often included, of course, lots of rivets.  The actual Jolly Green Giant was indeed covered with raised rivets, although they were not the size of walnut shells as the those plastic rivets would be if scaled up from 1/72 scale.
While not as detailed as the old Revell version, the model still has reasonable accuracy and boasts an interior with instruments and seated pilots.

Atlantis puts some work into their kit boxes, utilizing all six sides for the prospective purchaser.

Included along with that mandatory UPC eyesore is this additional profile artwork that distinguished Aurora boxes and catalogs.  Dem Brudders Trivia Fact:  Did you know that buying a UPC code for a new product costs a manufacturer a lot more than it should?  The confiscatory price of this obsolete artifact is baked into every product you buy.
​Atlantis lists this as a Skill Level 3 kit, for modelers 14 and older.  There are quite a few small parts for things like interior anti-torque pedals, control sticks, and a rather intricate rescue winch.  Younger modelers who’ve had experience with glue-kits should do OK with it.
Being a vintage kit, you’ll probably have to work a little more to get a nice model.  There's some flash on the small parts.  There are some minor sinkholes, and a few ejector pin marks on places like the bottom of the rotor blades, but they're very shallow and should be easy to fill or ignore.

The camo-scheme will complicate painting just a little, but if you're not interested in painting SEA camouflage, you could probably cheat and use an overall glossy light gray since some of the actual U. S. Air Force HH-3’s were done in that guise. 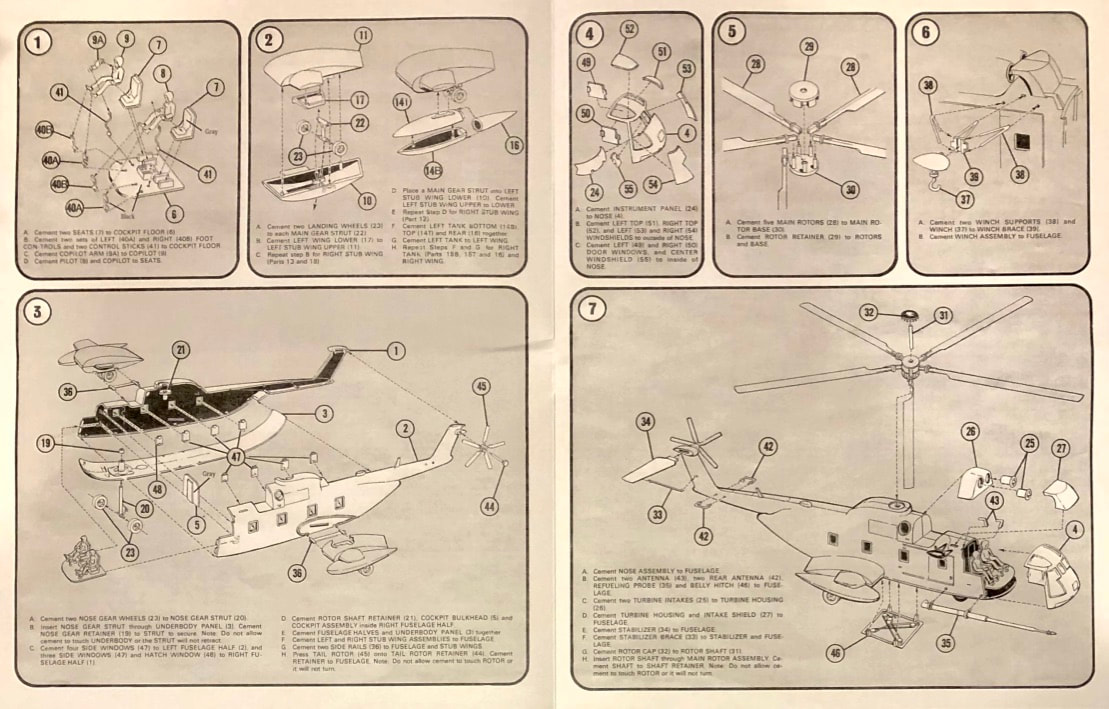 Here, you can see how it all goes together.  Pages 2-3 of the instructions include all of the assembly steps.  This kit is not for inexperienced modelers, but anyone with a few glue kits under their belt should have no trouble getting this one built.
Built out-of-the-box, this should make a nice model after a fun build.  Dem Brudders give it four thumbs-up!

LEARN MORE ABOUT THE KIT
BONUS MATERIAL I:  BEYOND THE BOX - ENHANCING THE MODEL

The Atlantis HH-3E kit includes many clear window parts.  The square ones for the cargo compartment have a small flange on the backside so they will nest into their airframe openings from inside prior to gluing the airframe halves together.
If you want to open up the cargo doors, dealing with the windows will probably be a less of a worry since your efforts to scratchbuild an interior will be bigger.  A very easy option for one open door is to cut the back off the hull bottom piece.  It already has joints on three sides; a simple cut at the engraved line, and you have an open cargo ramp.  The inside of the hull has some shallow ejector pin marks that would be easy to fill.
BONUS MATERIAL II:  MORE ABOUT THE HH-3E "JOLLY GREEN GIANT"

The following pictures are mostly from museum visits in recent years.  Brudder Dick and I visited the National Museum of the United States Air Force (NMUSAF) in 2014 and took many pictures of the HH-3E "Jolly Green Giant" on display there.
The “Jolly Green” nickname for the Air Force version comes from the Green Giant vegetable company’s famous mascot.

Thanks to its Navy roots, the Jolly Green Giant retains its amphibious capabilities, with a water-tight hull design.  The Air Force version is distinguished mostly by a loading ramp at the rear of the airframe, where the Navy versions were tapered more like the hull of an amphibious fixed-wing aircraft.  The Navy SH-3 had separate outrigger floats nearer the front, whereas the HH-3E had airfoil-like sponsons.  This configuration gave the HH-3E tricycle-style landing gear, and the SH-3 is a “taildragger.”
The U.S. Coast Guard (USCG) bought the HH-3F Pelican, which had the rear ramp and the same sponsons as the HH-3E.  The USCG versions deleted the refueling probe and added a nose radome offset from center.

I recall flying on a HH-3E Jolly Green Giant a long time ago; the one thing I remember is that it was very loud in the cargo compartment and a clunky set of over-ear headphones was a necessity to protect ones hearing and sanity.  I can't imagine enduring that for the 31-odd hours it took for that first transatlantic flight!  Compared to a smaller helicopter I’d ridden in not long before, the Jolly Green Giant feels like you’re riding in the core of a small moon.  It was pretty dark inside, which is why painting the inside of the windows black and calling it good is a viable strategy for dealing with the cargo compartment windows.
Aurora’s kit was released around the same time as Revell’s.  Circa 1969-70, aircraft modelers were interested in building subjects from the Vietnam War and this is one of those models released in that period.
Revell’s 1/72 HH-3 hasn’t been sold in a few years.  Lindberg sells a Sea King that is still easy to find at a low price.
An interesting companion for your Atlantis HH-3E model will be Atlantis’ Cheyenne helicopter, also in 1/72 scale.  The Cheyenne was an attack helicopter that emerged no further than a handful of prototypes.  Its intended mission was eventually filled by the Apache.  Aurora Models released a kit before the Cheyenne was cancelled, and it hasn’t been re-released in decades.

If building the model isn’t enough, Dem Brudders strongly recommend a visit to either the Pima Air and Space Museum in Tucson, AZ or the National Museum of the United States Air Force in Dayton, OH.

Pima has a nice assortment of USAF, Navy, and USCG helicopters, although they are displayed outside, where the hot sun has weathered them.  Their HH-3 is worth seeing, because it is the unusual “F” version, operated by the Coast Guard.  Pima continues to build more indoor display space; we hope that some day, the helos can be restored and displayed inside a climate-controlled environment.  This is one of the premier aviation museums in the country, and bus tours are available from the museum to the "Boneyard" at the adjacent Davis-Monthan Air Force Base, where decommissioned military aircraft are stored and scrapped.  Your visit will be an unforgettable experience.

The HH-3E at the Dayton Air Force Museum is indoors and looks like new inside and out thanks to diligent care and a comprehensive restoration.  Hundreds of additional air and spacecraft in this amazing collection can be viewed in four huge, climate-controlled hangars.  The most recent addition is a state-of-the-art gallery containing the extensive collections of U.S. presidential and test aircraft.  You may want to spend a couple days or more to take in what is there!

FIND OUT MORE ABOUT THE ATLANTIS H-3E "JOLLY GREEN GIANT" KIT AT AMAZON.COM