PRISONER MANIFEST:  ATLANTIS MODELS BRINGS BACK ANOTHER CLASSIC HORROR MODEL KIT.  BRING OR DEVELOP YOUR BUILDING AND PAINTING SKILLS  FOR A DELIGHTFULLY SPOOKY BUILDING EXPERIENCE.  COLLECTORS TAKE NOTE:  ATLANTIS HAS GONE THE EXTRA MILE WITH PARTS, BOX AND INSTRUCTIONS AND THIS MODEL WILL PROBABLY BECOME COLLECTIBLE!
Atlantis Models has brought back from the dead a number of classic Aurora horror figure kits.  Phantom of the Opera, Godzilla and King Kong have shown up in Atlantis boxes looking better than ever.  In 2020, Atlantis Models re-released Forgotten Prisoner of Castle Mare.  Forgotten Prisoner has seen a few releases since it came out originally in 1966, but Atlantis brings it back with glow-in-the-dark parts for the first time since the original glow-kit release in 1969. 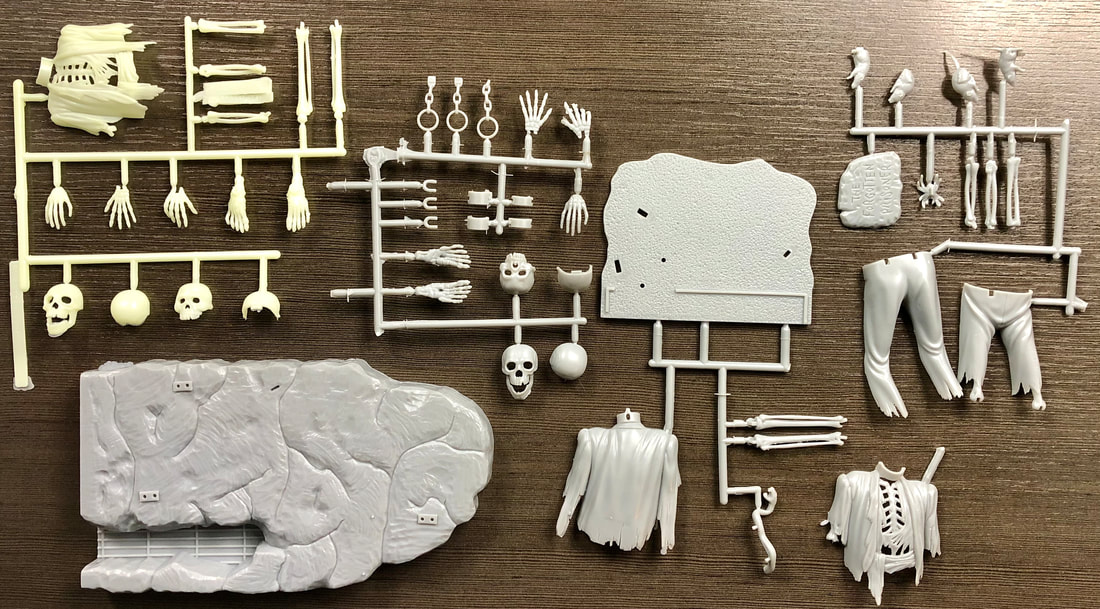 All plastic parts included in the kit are shown here.  Note the glow-sprue at top left.  Like most of the other glow-kits, the parts on the glow-sprue are duplicates of parts molded in regular gray plastic.  This means you'll end up with a lot of extra bones for other projects!  Do your own Hamlet thing!
Atlantis’ other monster models are based on popular movies.  Forgotten Prisoner is unique in that it is not based on a movie.  On the back of the box, Atlantis includes a nicely done full-color showcase with a built model and a brief story of Forgotten Prisoner, the despotic Baron Sorgi, oppressive overlord of Castel Mare!

As mentioned, Forgotten Prisoner has actually been re-released by a couple different model kit companies since Aurora Models ceased operations in the late 1970’s.  However, for the first time, Atlantis Models’ release includes a separate set of glow parts.
By 1969, after Forgotten Prisoner had been around a few years, Aurora Models got the bright idea to release their monster kits with some glow-parts, and a new sprue was tooled using masters for some of the key parts from the regular kit that would look great with a ghostly-glow.  The separate glow-in-the-dark sprue has most of the figure’s bones; the only bone-parts not duplicated are the bottom tips of the femur bones showing below the figure’s pants.  I suppose you could get some glow-in-the-dark paint for those femur condyle-regions that show below the figure's rat-eaten pants.
So you can paint the figure’s ragged clothing remains and the base, and leave the bones unfinished to take advantage of the creepy glowing effect.  I’ll possibly add some light weathering to the bones but plan on leaving them unfinished otherwise to take advantage of the awesome bone-chilling glow feature.
If you’ve built a plastic model or two using paint and glue, you’re ready to build Forgotten Prisoner.  You will definitely need glue intended for plastic models.  Cyanacrylate super glues or solvent glues intended specifically for styrene plastic model kits will work.  A hobby knife to separate parts from the sprues is needed, and this tool is recommended for removing a small bit of plastic “flash” webbing and mold seam lines present that are typical of vintage plastic model kits.
If you’re an experienced modeler who might consider building this kit to compete at a model contest, you’ll probably want some putty to fill a few sinkholes and fill some minor seams between parts. Sandpaper in fine and extra-fine grits might be helpful with parts cleanup and smoothing of any putty used in a few spots to cover seam lines.
Instructions consist of a single 8-1/2X11 (approximately A4) piece of coated paper.  That's right, Atlantis went all out with a heavy glossy bond paper used for high-end brochures and pricey coffee table books.  These kits will be collectibles, some day, modelers.  Better buy one kit to build and one to keep in your will-be-valuable-some-day collection!
Like many of the Aurora monster models, Forgotten Prisoner includes a very nice diorama base with a stone wall backdrop that will be fun to paint and weather.  Macabre accessories include a partial skull and severed arm of Forgotten Prisoner’s unfortunate cellmate.  A number of included rats suggest the ultimate reason why Forgotten Prisoner is a skeleton.  A snake and large spider further suggest that Forgotten Prisoner’s abode is not a pleasant one.
BONUS FEATURES
EXPERIENCE IT???

Believe it or not, there is an actual Castel Mare!  You can book a room there if you want.  Castel Mare Beach Hotel and Resort is a seaside resort a few miles north of Beirut, Lebanon, and it has absolutely nothing to do with the Forgotten Prisoner of Castel Mare model kit or the story behind it as far as we can tell.  The real Castel Mare actually looks like a picturesque place to stay if you happen to be in the Beirut area.  I can find no website, but more information can be found on travel booking websites such as Tripadvisor.com.

THE STORY OF THE FORGOTTEN PRISONER OF CASTEL MARE
A MONSTER PROBLEM?

DID YOUR MOM TOTALLY FREAK OUT WHEN YOU TOLD HER YOU WANTED A FORGOTTEN PRISONER MODEL KIT?

Today, the 1960’s monster model kits seem mild when compared to the violence and gore found in modern movies and video games.  From their inception, the monster models experienced some backlash from parents and parents groups in the 1960’s who thought the models were unsuitable for kids.  A public debate evolved about content portrayed in toys, games, and model kits that exists to this day.  In the 1950’s, it was comic books that were bound to be the seed of destruction for our civilization.
To this day, debate continues about violence and horror themes that persist in movies and video games and to be honest, Forgotten Prisoner still seems pretty mild compared to what pushes the limits of good taste these days.  Our elected officials always need something to make them look busy and public hysteria about such things will continue to help them sell.  And your mom will always freak out about stuff.  That's just what moms do.  Tell her you'll only display Forgotten Prisoner around Halloween.
MORE ON THE SUBJECT

Atlantis Models has brought back several of the classic Aurora Monster model kits.  Collect them all!

WHILE YOU'RE HERE, SCROLL DOWN A TAD OR SURF ON OVER TO OUR HOME PAGE TO CHECK OUT OUR OTHER CRAZY CONTENT!