ATLANTIS MODELS RE-RELEASES THE VINTAGE AURORA 1/48 JAPANESE TYPE 97 CHI HA MEDIUM TANK FOR THE FIRST TIME IN DECADES.  THIS IS THE ONLY COMMONLY AVAILABLE STYRENE KIT OF THE TYPE 97 TANK IN POPULAR 1/48 SCALE.
BY BILL ENGAR
#A313 -- NICELY DETAILED KIT -- INCLUDES FOUR FIGURES WITH TWO SEPARATE RIFLES -- 117 PARTS -- MODEL GLUE REQUIRED -- MAY BE PAINTED IF YOU WISH -- MSRP ONLY $21.99
COMING SOON!
Atlantis Models has reached deep into its historic tooling bank to re-release another classic Aurora tank model.  In the formative years of the armor modeling hobby, Aurora’s tank models had a reputation for accuracy and detail.  As 1/35 and 1/72 scales emerged as favorites for armor modelers, 1/48 scale was forgotten for a few decades.  However, in recent years, 1/48 has emerged white-hot at the perfect balance between detail and practicality for building a collection of iconic tank models.  Atlantis Models grows its collection of 1/48 tank models with the release of the most common Japanese medium tank of WWII. 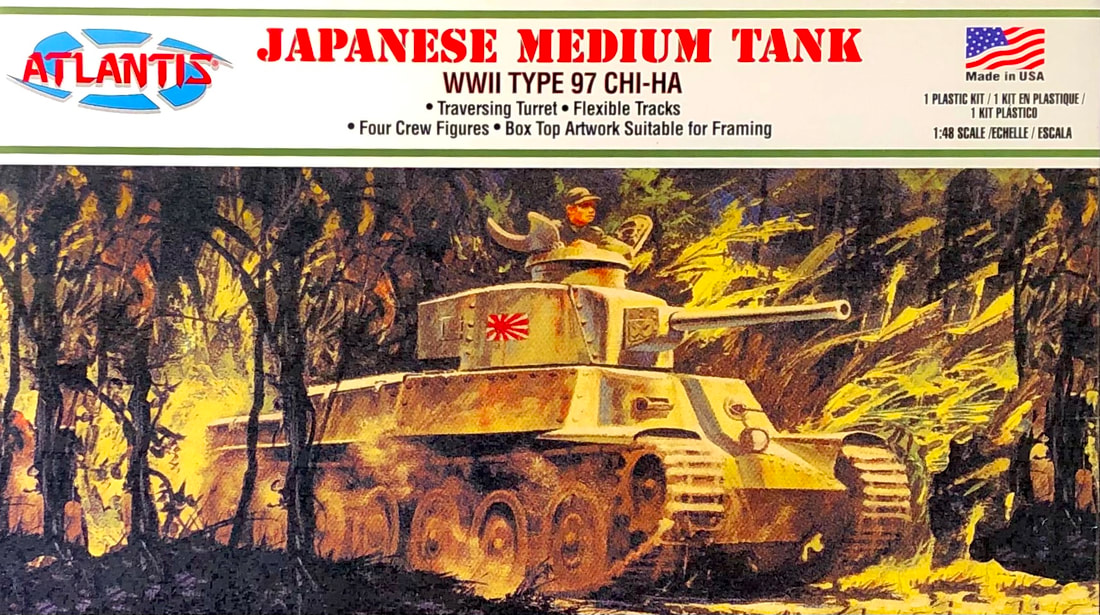 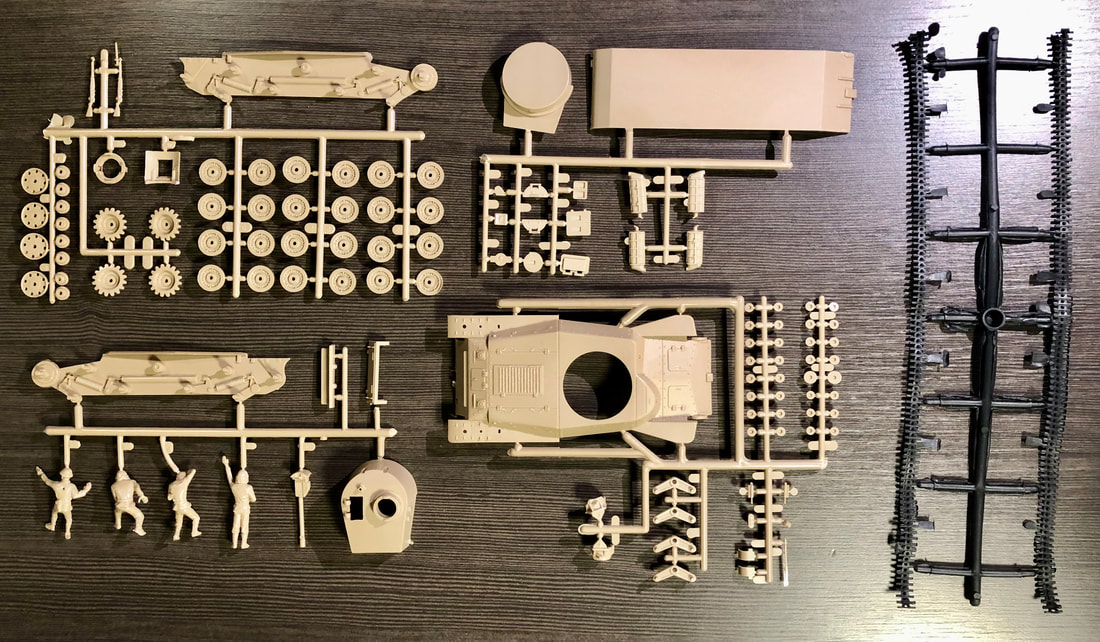 Styrene plastic parts are molded in a desert-tan.  Two black soft vinyl tracks are included.  Wheels may be installed to move if you wish.
The kit has diorama possibilities as four figures are included.  A tank commander may be posed standing in the tank’s top hatch opening.  He’s a full-body figure and may also be posed outside the tank if you wish.  The other three figures are armed infantry in combat-poses.  One has a handgun, the other two may be posed holding rifles.  The rifles are molded separately and one of them has a bayonet.  The figures are of decent enough quality that you would might even want to save them for use in another WWII diorama project if you don’t wish to pose them with your Chi Ha tank model.  This kit begs for the modeler to add a base with some tropical vegetation to make a South Pacific island scene circa 1942.
The Type 97 tank has a number of distinctive characteristics depicted in the model.  The hull top was designed with many angled panels and almost resembles a German armored car with distinct front and rear fenders.  The turret has a slight offset from center.  Large rivets were used.  With a little weathering, this will make a most interesting model.
Nearly 2/3 of the 117 parts are wheels or wheel retainers.  If you wish, the wheels and tracks may be built to move.  The Type 97 tank had an interesting “bell-crank” suspension.  Four large springs on each side essentially absorbed small bumps and obstacles.
Instructions are comprised of a single two-sided sheet with vintage artwork and English text describing assembly.  Three schemes are included.
Engineering on the kit was good and we could detect no major sinkholes or ejection pin marks that will cause trouble.  Being a vintage kit, the modeler can expect some parts cleanup and minor use of filler putty.  Some ejector pin marks and sinkholes on the figures were apparent but even these appear minor and should be simple to fix if the builder cares to do so.  The vinyl tracks had some flash that can either be cleaned up with an X-Acto knife or covered with mud-weathering.

Box side includes a short history, kit specs, and a list of recommended paint colors.
We were impressed with this kit, which includes extra figures and weapons that will make a nice diorama or accessories for other projects.  In 1/48-scale, it can be part of a larger scene that includes countless choices for the WWII Japanese aircraft model of your choice.  The 2Modeler guys give this kit four enthusiastic thumbs up and recommend it as part of your 1/48 armor collection!

SPECIAL THANKS TO ATLANTIS MODELS FOR PROVIDING THIS GREAT MODEL KIT FOR US TO REVIEW AND ENJOY!
​