THROUGH THIS WEBSITE, WE'VE BEEN ABLE TO MEET SOME AMAZING MODELERS!  WE'VE SWAPPED PHOTOS, AND I'M SURE ALL OUR READERS WOULD LIKE TO SEE THEIR WORK.

STANDARD LEGAL MUMBO-JUMBO:   We may not have space to post all photos we receive.  Submitters should understand that no financial compensation is offered for any contributions; all content is provided for the enjoyment of the online community gratis.  It is the option of submitters to provide their actual names and/or locations; submitters understand and accept any and all risks inherent on posting any content online.  By default, we'll use first initial and last name unless the submitter specifies otherwise.  Dem Brudders and DemBrudders.com will NEVER sell any personal information, email addresses, or submissions to any third party.
Christian A. from Colorado Springs, CO liked our Minicraft B-52 page, and he shared some of his work!  Christian is one of our IPMS/USA Region 10 brethren; he's a member of Centennial IPMS in The Springs.
Here's the Monogram B-52 in 1/72 scale; a very big model!  Christian built this "Arc Light" version for his father.
Christian's B-52 was a big hit with his father, who served the USAF as a B-52 Radar-Navigator Officer.  His uncle, who met Christian's father during navigator training, was so impressed when he saw the B-52 model, that he wanted  a model of "his" B-57.   Christian built him this B-57 from the 1/72 Testors/Italeri kit!  The markings were custom-made and depict his unit's aircraft.  The two navigators became close friends in the service and later married sisters, creating Christian's family connection!
Christian also built this Revell B-52H in a more contemporary scheme.  It's from the 1990's era 1/144-scale kit.  The model comes with external ALCM's.  Note the Memphis Belle III nose art!
John B from Spokane, WA is a retired USAF officer and automotive journalist.  You may recognize his name from our Monogram Air Power Page.

In front is MRC's H-13 Sioux in 1/35 scale.  At rear is Revell's H-13, also 1/35.  Both these kits came out in 1993-94.  The painting details are authentic.  John should know--he's a licensed Bell 47 pilot!
John built this Piasecki H-25 Hup-2 helicopter from the recent Atlantis release.  He added cockpit detailing and an exhaust pipe.  At rear in the photo at the right, you can see an original Helicopters For Industry pre-built factory promo (note the clear stand).  This model predates the Aurora release.
John decided to build the Atlantis Models' long awaited re-release of Snoopy and his Sopwith Camel with a more realistic scheme for the airplane.  While retaining the original kit stickers, he painted the plane with Humbrol Olive Drab straight from the rattle-can.
We've also used these pictures in our comprehensive kit review of Atlantis Models' Snoopy kit which includes Red Baron.  In the bonus features, we have photos of a flying Sopwith Pup replica (in 1/1 scale!) and this is the scheme which inspired John to build this model.
Rich Roy from Spokane, WA spent his career working with high-end exotic sports cars and racing vehicles.  In 1/1 scale, he owns two Continuation Cars (look it up!)--a Ford GT40 and Brock Coupe (Shelby Daytona)!  Rich builds model cars when he's not on the track.  He's built hundreds since he was young.
The 1/25 AMT Ford Transporter is a restoration of a model Rich built in his youth.  The body to the Daytona Coupe on the back is from a Lindberg kit - Rich reports that the kit wheels were about as detailed as checker pieces.  The body wasn't bad though; he embellished it a bit and put it on an AMT 289-Cobra chassis.  The Daytona was a hardtop development of the Cobra (seen in front at right).  The "T" represents "trainer," as in Shelby Driving School trainer seen in the recent movie, Ford v Ferrari. 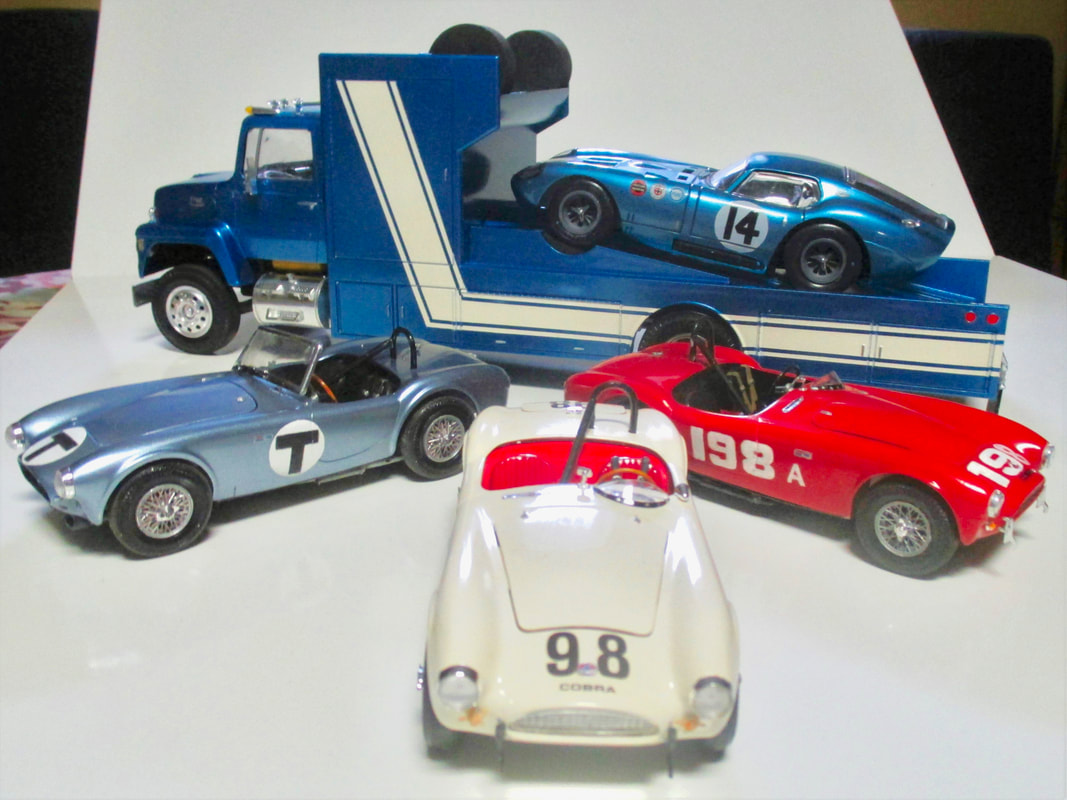 While the Daytona name is perhaps better known when connected to Dodge or Ferrari, the Shelby Daytona was actually designed to compete with the Ferrari 250 GTO in the mid-1960's.  Only six original cars were built.  Rich's 1/25 Daytona (on the transporter) is shown with a trio of Shelby 289 Cobras.
Joel Tavera from Palm Desert, CA has been a major contributor to Culttvman's website for years, sharing photos of his amazing models there.  Joel also lent his talents to Lunar Models, which was a prominent maker of resin sci-fi kits.  He provided mold masters and research.  Joel sent me some pictures of a recent Lindberg USS Nautilus build, and I asked him if he'd send some photos for our gallery.  Check out his USS Nautilus model on our Nautilus History page.
DAVID GARCIA FROM HAMPTON, VA

Along with members of his fellow IPMS Tidewater chapter, David Garcia presented a memorable IPMS/USA national convention in Hampton, VA that Dick attended in 2014 (if you haven't seen our IPMS/USA page, check it out here!)

David enjoys building those old kits from a much earlier time in the hobby that can just never go away.  You know the kits; many of them were odd scales in the first place, and we barely got them together as kids in spite of copious use of glue.  They were replaced by "much better" kits in the 1980's and replaced again by an "even better" kit in the 2000's.  But some of us still love the self-torture inflicted as we build them again (using a little less glue) when much more accurate, easy-to-build kits are out there. And of course we all know what online commenters have to say about these vintage kits.

"Just so you know I build verbally abused kits out of the box.  You know the kind; crude, toylike, inaccurate etc.  Those are the kits I like.  They are the early kits of our hobby and I build them out of the box.  With today's paints and tools one can make very nice models of these early kits."

"When I heard that Atlantis was releasing classic Revell kits I was really excited, especially the release of the B-24J and B-52 combo.  I've bought just about all of their releases and will continue to support them."
Mr. Editor Bill sez:  I bought this kit a while ago since I like the F-94C.  I recoiled immediately upon opening the box and backed slowly out of the room.  Now that I've seen what David's done with it, I might dare crack the lid on that box again!  But don't get your expectations up.  Mine certainly won't be as nice as what David has committed!

"It's the Airfix 1/72 Ju88 tweaked just a bit.  The clear parts are very thick so I made a new set with my Mattel Vacuform machine and added wheels from an AMT kit."
Ed:  We love the photography here.  Note the single overhead source light perfectly duplicates a sunny day.
"Here's one of my favorite builds—it’s the Revell 1/40 Skyraider built up as a Sandy.  It is out of the box with the only addition being the white antenna blade on the spine.  I used two kits on this one. I had a started USN version from the 1960s.  The decals were not very good and finding replacements would be tough.  When I realized that I had the Vietnam version I used the wing stores from that kit (which came out in the 1970s).  I photographed the build process (which was mostly an exercise in puttying and sanding).  The paint is from AMK. Decals from the Vietnam version.  There's a great scene from Flight of the Intruder where it makes its entrance."
Ed:  Is it just me, or has Flight of the Intruder aged a little better than the original Top Gun?  If you haven't seen it, the Sandys in that movie are very cool.