ATLANTIS MODELS HAS BROUGHT BACK ANOTHER LONG-LOST CLASSIC WITH A 1950'S ROCKET-TO-THE-MOON CONCEPT THAT HASN'T SEEN A RELEASE IN HALF A CENTURY.
BY BILL ENGAR AND JOEL TAVERA

​Join us as we take a look at Atlantis Models' 1/96 Moon Ship!  Joel Tavera has built this model and we'll feature his photos and insight later in the review!

TO THE MOON AND BACK:  ATLANTIS MODELS' CLASSIC MOON SHIP IS A BLAST-FROM-THE-PAST FROM THE FUTURE THAT NEVER WAS.  IT'S A VINTAGE KIT EXPERIENCE THAT SHOULD PROVIDE AN EASYGOING BUILD EXPERIENCE FOR ANY MODELER COMFORTABLE WITH GLUE AND PAINT.  THE HYPOTHETICAL NATURE OF THE SUBJECT BEGS FOR CREATIVITY--NO CHASING ACCURACY REQUIRED!
​In 2021, Atlantis released its Moon Ship kit.

This was originally part of the XSL-01 Manned Space Ship from 1957.  This was a big model with a pre-Apollo rocket-to-the-moon concept.  Four large boosters nested around the Moonship somewhat like a Russian Vostok rocket. 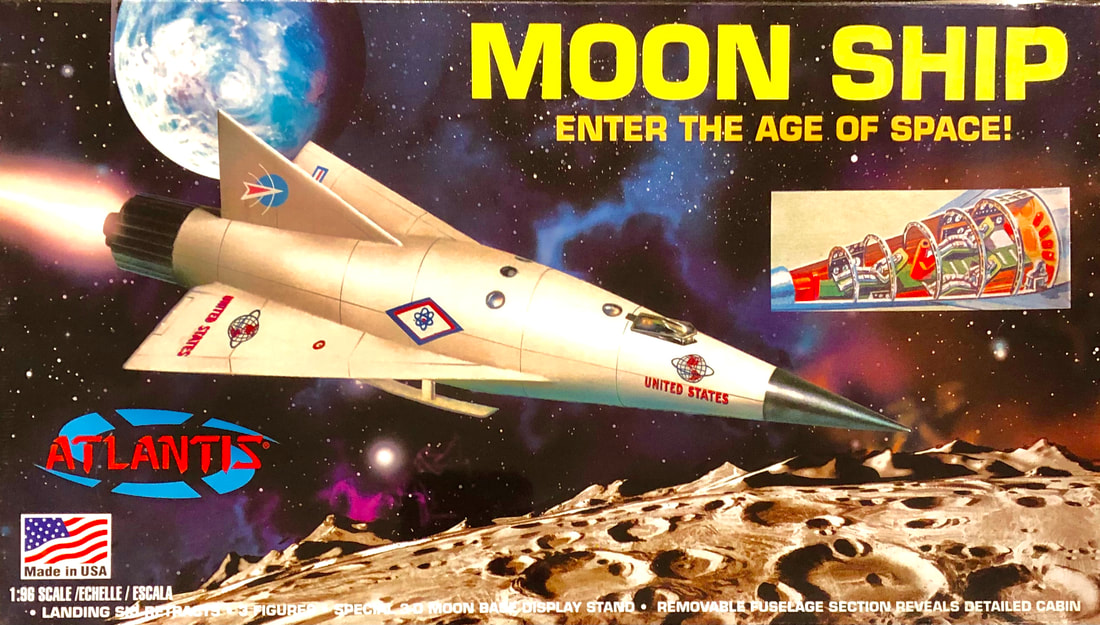 Atlantis 1/96 Moon Ship, #H1825.  MSRP $24.99.  Available now directly from Atlantis Models or your favorite retailer!
In its XSL-01 form, the Moon Ship was the top stage of a big model.  Even with a price double what a normal kit would cost, the XSL-01 sold sufficiently that another hypothetical space kit, the 1959 Space Station, was released.  It was more elaborate than the XSL-01 but did not sell sufficient numbers for any additional kits of this sort to appear from Revell.  The Moon Ship was sold separately by itself through a couple boxings.

The kit has 29 parts including a two-piece stand.  Model length 6.25" (16.9 cm).
It briefly appeared in the Space Pursuit set in 1969 with rather cheesy comic book-style box art.  This release did not particularly resonate with modelers who were at least briefly more interested in the actual Apollo program at the time and more Apollo models were sold.

Atlantis Models came into possession of the tooling and has chosen to re-release it in 2021.
Two views of the main fuselage bottom with wings built-in.  Those wing panel lines are engraved!
The Moon Ship is not a huge model with a length of just over six inches.  Recall that it was originally intended to be a component of a much larger model.  But it includes some very nice interior detail and can be built into a nice display piece about “The future that never was.”
In 1950, George Pal produced Destination: Moon.  This movie caught the imagination of a post-WWII public and depicted somewhat realistically a moon landing.  Of course the sleek movie rocket was reminiscent of the V-2 and pretty much set an expectation how a moon landing might be accomplished that lasted through the decade.
Revell’s XSL-01 concept acknowledged that a multi-staged approach was needed to escape Earth gravity and land on the moon.  The direct ascent mission profile remained.

The third stage motor was referred to as an atomic pile in an original booklet that came with the XSL-01.  Re-releases of the Moon Ship without the boosters had to simplify the mission profile suggesting an improbable powered landing utilizing a skid.
The instructions explain that part of the original booster included tanks and landing gear that was intended to stay with the Moon Ship for a vertical landing.  This hardware would also remain part of the spacecraft through ascent from the moon and Earth-return.

The direct ascent mode depicted here might be possible utilizing a nuclear engine; the Moon ship is entirely too small to accomplish its tasks with conventional chemical  fuels.

Atlantis has cool boxes!  A vintage diagram explains ship components.  They have a good reason to show off their decal sheet; their decal artwork and quality is always top-notch.
Of course there were a few similarities to how the Apollo landing was actually accomplished.  Without the benefit of a powerful nuclear engine with a compact fuel source, the actual Moon spacecraft had to be modularized in order to discard as much unneeded weight as possible in the form of empty tankage and engines no longer needed to propel that tankage as the journey progressed.  The concept was called, “Lunar Orbit Rendezvous” and thanks to the direct-ascent expectation set by hypothetical concepts such as that portrayed in Destination: Moon, the alternate notion of LOR had to be adopted in the early 1960’s as the only way the Moon landing could be accomplished prior to 1970.

Atlantis provides kit specs and a short history of "Moon Ship."
Instructions are an 8x11" (approximately A4) folded sheet.
Nuclear engines and rockets larger than the Saturn V were cast aside in the fervor to get to the moon before 1970, which as we know, was a political goal.  Our story on the Hawk Beta One has information about nuclear engines studied in the 1950’s and we have photos of some concept test hardware that was actually built.  As we all know, nuclear propulsion began and remained with Navy vessels.

Back to earth, Atlantis Models’ Moon Ship is 29 parts molded in a silvery plastic.  The fanciful rocket is a winged bullet-shape fully reminiscent of the V-2 rocket, a common design theme for 1950’s spacecraft.
SPECIAL GUEST BUILDER JOEL TAVERA ​
Joel's Moon Ship shows the results of the model as built using paint and boxtop recommendations.  We express our thanks to him for sharing his photos and insight with us!
Joel Tavera's thoughts and impressions of Atlantis Moon Ship:

"This model was a bit smaller than I imagined it to be making for a great desk display.  Every detail is crisp for its size. Every piece fits very well with the exception of the clear parts that had to be gently positioned and then super-glued in place. ​

Original Revell box art for Moon Ship as released in the USA.
A detailed interior includes a 3-person crew with a catwalk floor and couches, control consoles, periscope, internal framework, and one space suit (it looks like only one crewmember goes out at a time unless the design allows for additional bulky spacesuits to be stashed someplace else).  Portholes and a movable canopy comprise the clear parts and a rear bulkhead has oxygen tank detail.  The model adds wings, a nuclear engine and nozzle and a moon base and with all those things, you have a pretty cool model!

Revell Moon Ship as released internationally.  Note that Atlantis included decals for this scheme as well as the USA version.  Of course you may mix and match the decals as you wish to come up with your own creative version of Moon Ship!  Our key consultant mentioned a great idea--why not finish the model in Star Trek markings suggesting an experimental craft or Starfleet Academy trainer!
Like many vintage models, the Moon Ship is best built by those who have at least a little experience assembling and painting styrene plastic model kits.  The parts will need a little cleanup with some flash to trim off as noted in the photos and a hobby knife or razor blade will be needed for this.  There are a few sinkholes.  We'd recommend leaving the large ejector pin marks on the catwalk as-is.  They can easily double as equipment access covers.  Wash the parts in soapy water prior to painting to remove mold release (the stuff Atlantis uses washes right off with a little dish soap).  Unless the builder is planning on a contest-build, most modelers ought to be able to get this kit built in a leisurely, enjoyable weekend. 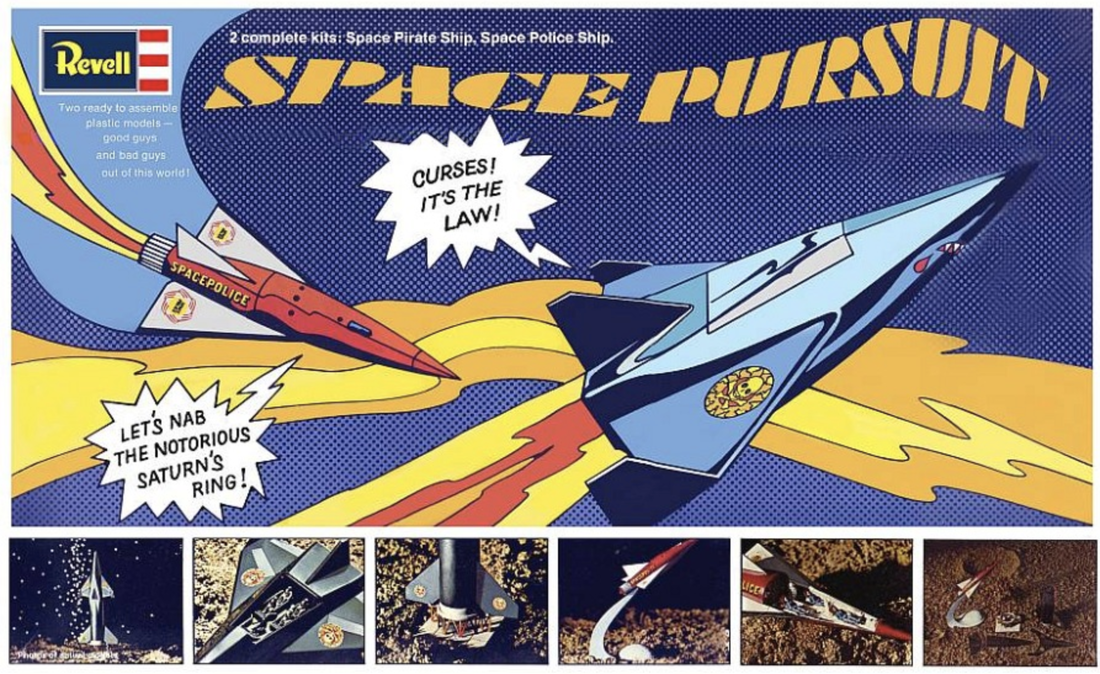 In 1969, Revell paired the Convair Moon Liner with the Moon Ship in this "way out" Space Pursuit set.  Modelers preferred to buy models of actual Apollo hardware that began visiting the Moon that year.  Note that the Convair Moon Liner kit is also available from Atlantis Models!
Atlantis Models has done an awesome job with the re-release of this model kit!  We'd like to thank them for sharing this model with us to review and enjoy!  We give it four enthusiastic thumbs up and recommend that you add it to your collection of great vintage kits from Atlantis Models!

And thanks again to Joel Tavera for sharing his build photos and impressions of this awesome kit!  Like Joel, we're excited to see future plans from Atlantis Models regarding cool hypothetical space kits!  Be sure to check out their website and sign up for their newsletter to keep updated with the latest kit release news from Atlantis Models!
These are our Amazon Affiliate / Amazon Sponsor links.