The Story of Titanic seems to strike a chord with just about everybody.  The excesses of the ship and the details of her demise are an allegory for the frailties and foibles of humanity.

For many years, Revell’s 1/570 Titanic and Minicraft’s 1/350 Titanic were the only plastic kit choices for modelers.  After the 1997 movie Titanic smashed box office records, a number of model kit manufacturers released new Titanic kits, and now, modelers and Titanic enthusiasts have a dizzying number of choices to build a Titanic model.  At last count, you can find Titanic kits in about a dozen different scales, ranging from 1/1200 to 1/200.


​
Academy’s 1/700 RMS Titanic MCP #14220 is just an excellent choice for the modeler, or a casual builder who wants a nice model of Titanic without a lot of effort.  Academy’s “MCP” designation stands for Multi Colored Parts.  At about fifteen inches long (38 cm), the kit provides a reasonably-sized model that will provide a moderately involved building experience.
​THE SHORT VERSION:  Academy’s ACA14220 1/700 Titanic MCP kit will make a nice Titanic model for the experienced modeler or the adventurous casual builder.  With attention to accuracy and intricate details by Academy, it’s not for beginners.  Glue will be needed.  But it’ll look great without paint and amazing if the modeler decides to go to more effort.

We realize that some of you might not be regular model builders, or previous visitors to our site.  Those of you who are more experienced, please indulge us as we mention some very basic modeling info here in conjunction with the review for this kit, which was designed to achieve a fairly realistic result without much of the effort that is typically expected to get a nice-looking model.  We want to help those casual hobbyists make an informed choice if they decide to purchase this kit and provide some tips to improve their building experience.

At time of publishing, the model was purchased from Hobby Lobby for $39.99 before a discount with a 40%-off coupon.  This pretty much brings purchase price equivalent to the lowest offered by discount international sellers at places such as eBay.  Note the window in the box allowing the potential purchaser to see the colored parts.
We plan to give the ship and the subject Titanic the “Dem Brudders” Treatment eventually with a series of web articles and some possible "jackass-stunts" on YouTube featuring your favorite Titanic model kits.

An original version of this kit first appeared in 2007.  This first iteration was hailed as being easy to build for the casual hobbyist, yet it had plenty of fine detailing to satisfy the avid model builder.  In 2012, to commemorate the 100th anniversary of the Titanic sinking, Academy re-engineered the same tooling so that even less painting would be required to render a very nice looking model right out of the box.
Regarding tiny parts, there are ten capstans that are about 2mm small and 35 individual benches not much larger.  Masts, ratlines, anchors, cranes, stack piping, and quite a few other parts are delicate and can easily be broken if not removed from the sprue very carefully.  So the model will require the builder (or helper!) to come to the table with some experience handling fragile, small components.  An X-Acto knife with a #11 blade will be handy, and a sprue-nipper or small pair of side-cutter pliers (“dykes”) might be helpful to cut parts from sprues without breakage. 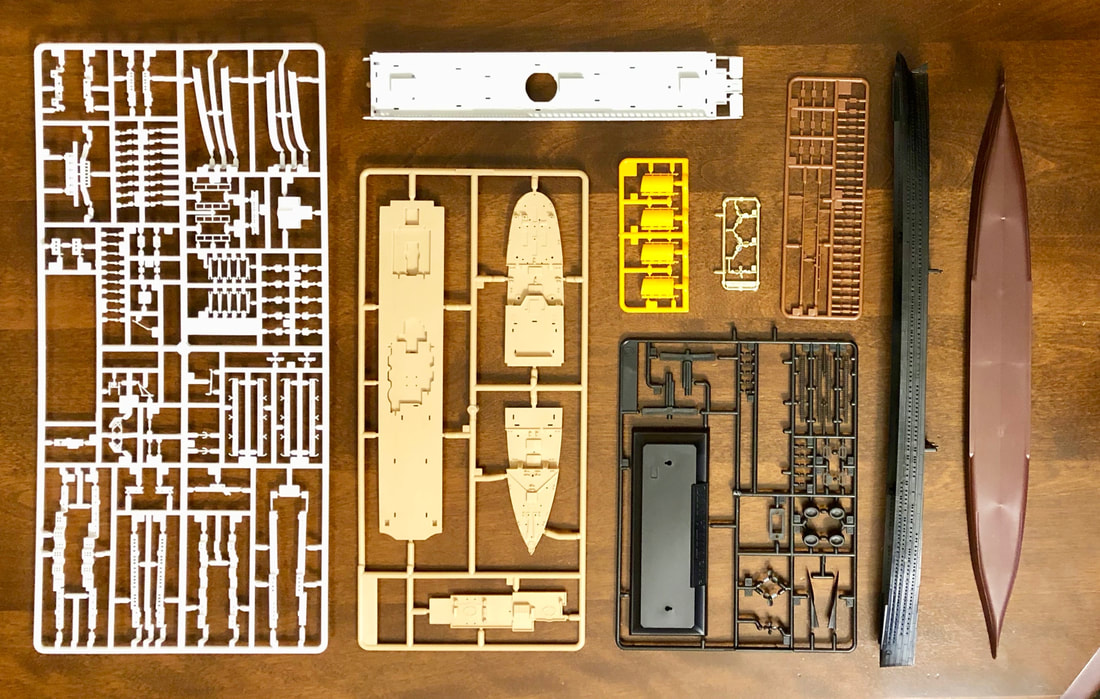 Waterline builders, take notice!  Minicraft's MCP treatment has made your job a lot easier.  Stay tuned after the review for some details about the history of this kit and some cool perks of the MCP/Centenary release.
Perhaps I’ve left the habitual/experienced modelers wondering if the kit will have enough fine detail to satisfy them, and the answer is a resounding yes!  The inset promenade deck bulkheads all have open windows.  Hull details appear a level of detail better than those executed on the 1/700 Revell of Germany kit.  The aftermarket has produced wood deck sets and photoetch sets to enhance this model and there is no reason why a showstopper model can’t be produced from this kit if one wants to apply intermediate or advanced modeling techniques to the build.

Three hull connector pieces were already installed in manufacturing.  How well do they work?

The bottom hull has been dry-fitted (no glue) here.  Fit of the two parts is very precise.
I had to look hard to find a small handful of sinkholes, with the tops of some lifeboats being the worst offenders.  Experienced modelers will default to their filler putty of choice to deal with this.  The casual builder might not even want to bother paying a few bucks for a tube of putty when a small dab at most might be needed.  The sinkholes I found probably wouldn’t even be noticeable by any other than a modeler who builds for contests.
Academy Models is known for its precision and the tooling here certainly fits that reputation.  The main superstructure piece and funnels were made using state-of-the-art slide-mold techniques and implementation in this model was expertly done.  I couldn’t see any flash and parts will need only minor cleanup such as removal of sprue attachment points and a quick pass with that #11 X-Acto knife to shave down those mold-parting lines if you’re doing a contest-build.
Perhaps the sole weak point of the kit in my opinion are the vertical supports for the stand.  They are rather thin and wimpy.  Slots for wiring were added to the 2012 iteration.  If the builder chooses to use the stand, depressions on the inside of the hull bottom are cut through to accept the posts.  I’ll substitute some other post and support when I get to this part of construction on my particular kit.  This is a minor nit, of course, which does not affect the model itself, and if corners need to be cut anywhere by a manufacturer to keep the price low, or whatever, the stand is a good place to do it in my estimation!
My second-biggest beef with the kit concerns the plastic color chosen for the funnels.  They’re neon-orange!  They look like they’ll glow if you turn the lights off.  OK, I’ll concede that they give the model some visual punch at the expense of accuracy, but even the most casual fan of the ship knows that they are entirely the wrong shade and intensity of color.
Thankfully, this is easily corrected with a coat of paint, assuming the modeler can acquire or mix a more accurate color matching the “White Star Buff” shade that the funnels carried.  Younger modelers or casual hobbyists not interested in painting the kit anyway probably won’t be bothered much by this and that’s fine—the splash of orange will certainly make the model stand out!

A single, large foldout multilingual instruction sheet provides assembly steps.  It appears to be easy-to-follow.  We'd recommend that the builder has some experience successfully building similar types of kits before attempting this model!

A short history and the final steps comprise this side of the instruction sheet.  A nice inclusion is the parts diagram.
For builders who wish to take the kit beyond the “no-paint-required” route, an extra level of realism can be achieved by painting all parts—because if you are REALLY shooting for complete realism, plastic looks like plastic!  However, the plastic that Academy uses is high-grade with premium quality coloring agents, so all parts have less “plastic-y” translucence than many other kits.  A shortcut to consider would be to spray the plastic with a clear, flat finish which will knock down the plastic-look by a measure.  You need to be sure the clear paint you use will not craze the plastic.

Side of box #1.  Note that some extra detail painting has been done on the model in the photos here.

On the other side of the box, the model shown has not been painted; the photo there shows what the model will look like if no paint is used.
Many molded-in deck details can be painted; the breakwaters, for example, will look better if painted white, and the mooring bollards can be painted black.  One way to ease this paint work considerably is to consider an aftermarket wood deck set.  Tedious masking won’t be needed; deck details can simply be hand-brushed or airbrushed with the wood decks covering up any overspray or excess brushed paint that wandered onto the plastic deck surface.
BONUS MATERIAL:  A CLOSER LOOK AT ACADEMY'S "MCP" RELEASE OF THE 1/700 TITANIC

What is MCP?  How did Academy observe the 100th Anniversary of Titanic’s Sinking?  In 2007, they released their 1/700 Titanic kit.  The model was hailed as being easy to build with many fine details that would satisfy the pickiest modelers.  It was a nice base to add aftermarket parts such as photoetch to create an award-winning contest model.

Academy added open portholes to the hull of their Titanic kit with the MCP (Multi-Colored-Parts) release of 2012.  This photo shows the 1/700 Titanic MPC parts right out of the box--no painting was done for this photo.
In anticipation of the 100th Anniversary of the Titanic Disaster, Academy decided to make the model even easier to build, and this was the year they released their MCP (Multi-Colored Parts) edition.  How did they change the kit?  Were liberties taken that might streamline construction at the expense of scale fidelity?  These are valid questions that we’ll address here.
Another significant modification to the black upper hull is the inclusion of open portholes.  As mentioned, the 2007 one-piece hull would be suitable for an RC conversion and very watertight right up to deck level.  This new 2012 hull, however, begs for lighting thanks to the open portholes, and that is exactly what Academy has done with an alternate version of this kit, 14420, which is the same plastic plus wiring and LED’s.
Four tan-colored parts comprise the deck.  The original 2007 version had the benches molded into these components.  This version deletes the benches (they are depressions here) and the new brown-plastic sprue has these.  Addition of these small, separate parts does complicate construction a little compared to the old kit, but the result adds quite a bit of realism to the model without painting.
The large promenade deck part is molded in white.  The 2007 edition had a couple molded-in benches that were blanked off in favor of the new separate benches.

When I was deciding which version to buy, I opted to purchase the non-lighted version and add my own lighting hardware to improve upon the quality and degree of lighting that comes with the Academy lit version.  Using the a Hobby Lobby 40%-off coupon put the price of the non-lit version comparable to discounted overseas eBay outlets and I didn’t even have to wait two weeks for delivery of a bent box.
MORE TITANIC MODELS FROM ACADEMY
SCROLL DOWN JUST A BIT TO SEE WHAT ELSE IS GOING ON AT DEMBRUDDERS.COM - DON'T FORGET TO BOOKMARK US!  WE POST NEW STUFF ALL THE TIME.