​By Bill Engar
SUMMARY:  MINICRAFT'S 707 IS ONE OF THEIR EARLY, ORIGINAL AIRLINER KITS AND IT LOOKS GREAT IN MILITARY OR CIVILIAN CLOTHES.  THIS VERSION INCLUDES AN OUTSTANDING DECAL SHEET WITH THREE MILITARY OPTIONS.  IT'S A PRETTY EASYGOING BUILD.  PAST ISSUES OF THE KIT OFFER A NICE VARIETY OF AIRLINER OPTIONS AND THERE ARE PLENTY OF AFTERMARKET DECALS AVAILABLE IF YOU WANT TO GO BEYOND INCLUDED DECAL SCHEMES.
Of the aircraft spawned by Boeing’s prototype number 367-80, known as the “Dash 80,” the KC-135 is normally associated as the military variant, particularly in its refueling role.  However, the United States Air Force (and quite a number of military services of other nations) has also used the 707 in military applications.  Perhaps the most famous are a pair of 707’s AKA VC-137’s that were known for their call sign, Air Force One.  These aircraft served as the transport of the President of the United States.  SAM 26000 was the primary presidential aircraft for the Kennedy, Johnson, and Nixon administrations.  SAM 27000 came into service in 1972 and served the Nixon, Ford, Carter, Reagan, and Bush-41 presidencies with SAM 26000 remaining as a backup. 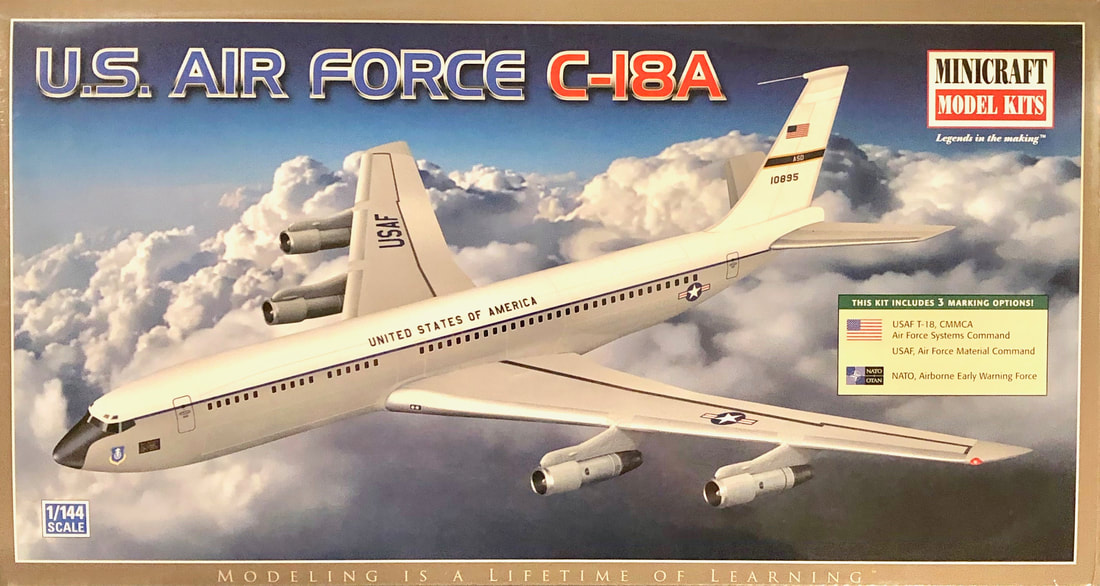 Minicraft’s 300 Series 707 was welcome when it first appeared.  The kit has engraved panel lines and goes together pretty well.  Parts fit has no major surprises and there are a few sinkholes to deal with.
The cockpit piece has fairly thin, clear windows.  If you want to scratchbuild a cockpit, you'll be able to see it through the clear window.  Or, Minicraft includes a black windshield decal if you don’t care to preserve the clear windows.

This kit is one of Minicraft’s early airliner models.  The engine intakes will have a seam to fill on the inside of the nacelles.  It’s not like those TF33 engines are huge, though, so it really won’t be noticeable if you don’t decide to bother with it.
One of Minicraft’s kit engineering strengths is the wing locator fingers.  These interleaving tabs assure that the wings are correctly aligned and the attachment will be secure.  You don't have to worry whether or not the wing angle will be correct--the tabs assure that it is.

The cartograf decal sheet that comes with the model is huge.  Since each aircraft is accurately portrayed, the window configuration differs between them and Minicraft provides a complete window set for each different scheme.  What that means is that you’ll have plenty of leftover windows for your other 1/144 Boeing airliner projects!  Depending on which scheme you choose, you’ll have a set of cabin doors left over as well.  One set has a black outline and the other has yellow.

Panel lines are fine, and engraved with a stressed-skin appearance you'd expect to see on an early Boeing jetliner.

The side of the box shows three options for your model including white and gray, overall white. or overall light gray. 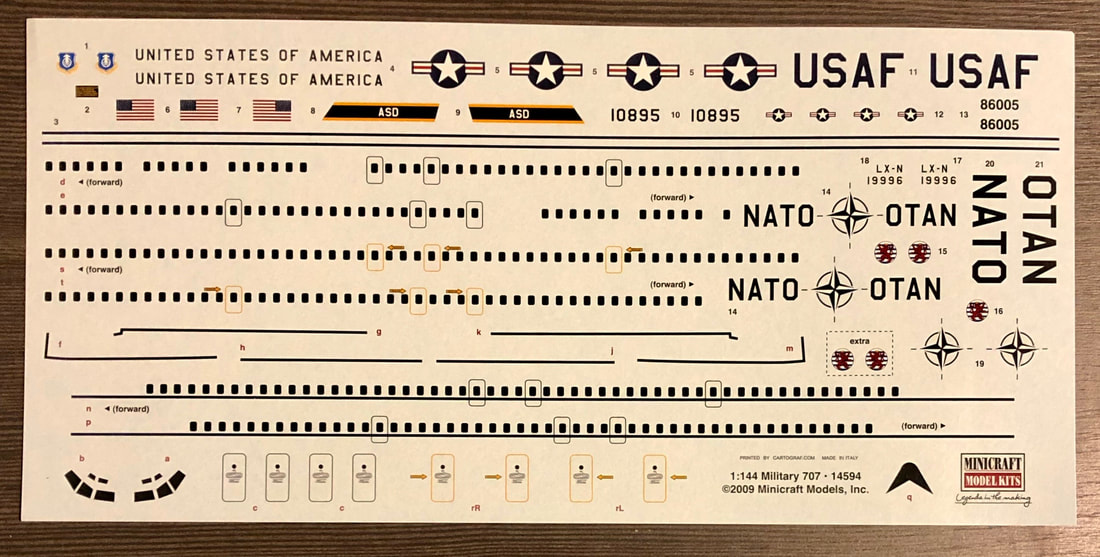 Since the decals are made by Cartograf, you can count on perfect registration between printed colors.  The resolution and detail is so fine for these markings that you’ll need a magnifying glass to fully appreciate it!
Another of Minicraft's strengths is the company's comprehensive, well-written instruction sheets.  A parts map shows part numbers so you can't get confused if you remove parts from sprues for cleanup prior to assembly.  Note the diagram showing the fan and suppressor parts that won't be used for this particular kit!
A whole 8-1/2X11" (approximately A4) page for each decal option shows painting instructions and proper location of markings
You’ll enjoy building this model and adding an out-of-the-ordinary version of the 707, AKA C-18, to your 1/144 collection.  Dem Brudders give this one four thumbs up!

We hope that Minicraft will release an airliner version of this kit again!  In addition to the C-18, Minicraft has available an AWACS version.
​
SPECIAL THANKS TO MINICRAFT MODELS FOR PROVIDING THIS KIT FOR US TO REVIEW AND ENJOY -- SEE ALL THE GREAT MINICRAFT KITS AT MINICRAFT.COM!

We're Amazon Affiliates.  Through this program, if you decide to purchase one of these kits after looking at it on Amazon, we get a small commission, which helps us maintain our swanky web hosting service for this site.  This program costs you nothing and helps provide you with top-quality content! 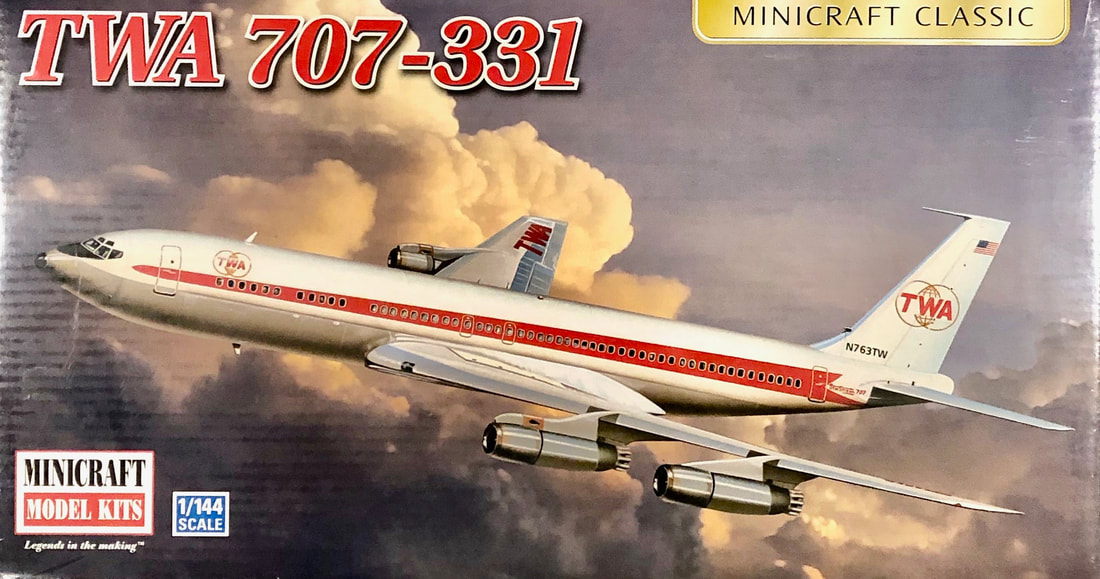 The box side includes a short history of the 707.  The 707 revolutionized low-cost air travel.
BONUS MATERIAL:  A LOOK BACK

For many years, Revell's 707 was the go-to model kit you got if you wanted to build one.  In the USA, the Airfix kit was available, but harder to find.  While the Airfix kit depicted the later, larger 707, the common Revell kit was supposed to masquerade as the larger -3XX series in such incarnations as the Revell E-3A kit and the Microscale decal version of Air Force One.
Minicraft Models released its Intercontinental 707 model kit in 1999, and soon provided a range of kits with different decal options.  In addition to classic airliner schemes, Minicraft offered a VC-137C "Air Force One" with tail number 26000 (the first of two built of these aircraft). 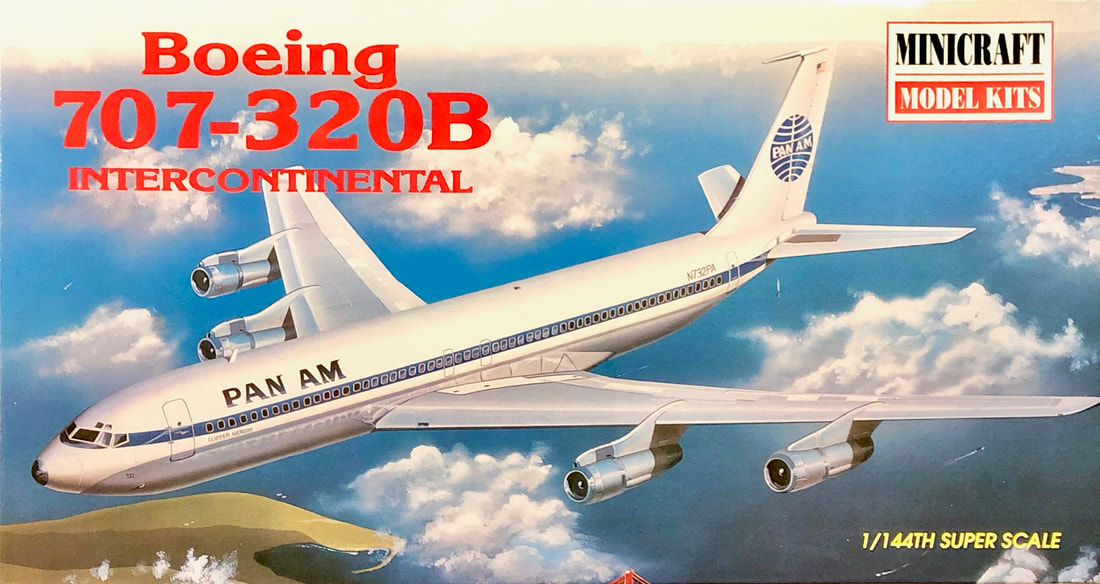 Only one decal option was included in the kit, Pan Am's classic livery.  These three beauty shots adorned the entire side of the box.
SAM 26000, known more popularly as Air Force One, has much interesting history, and we'd recommend seeing it at the National Museum of the U.S. Air Force (stay tuned for pictures below!).  However, Minicraft Models provided another aircraft with an interesting piece of aviation history, that of "Pole Cat."  This 707 was the first aircraft ever to circumnavigate the world on a polar route!
On November 15, 1965, a 707-349C was leased from Flying Tiger Line and modified with additional fuel capacity from bladder-style fuel tanks installed in the aircraft cargo cabin.  The around-the-world flight via the Earth's poles was planned and implemented by a group of pilots, navigators, and flight engineers from Flying Tigers, TWA, and Boeing.  Most of the cost for fuel and leasing was paid by Col. William F. Rockwell, Sr, Rockwell Corporation's founder.​
Due to the state of navigational aids in the 1960's, additional hardware needed to be installed in the aircraft, including an Inertial Navigation System (INS) by Litton and the newest SSB (Single Side Band) radio gear, required for communication across a vast, remote area.  The Combi (cargo/passenger) aircraft had 27 passengers aboard and duration of the flight was nearly 62-1/2 hours (that's a LONG time to be in an airline seat!).
The "Pole Cat" flight was not non-stop, however.  Even with the extended fuel capacity, a stop was required at London-Heathrow after a flight from Honolulu which crossed the North Pole first.  From LHR, stops were needed in Portugal and Buenos Aires prior to crossing the South Pole.  Once the South Pole was reached, the aircraft circled it four times.  The result of this maneuver was that all 24 of Earth's time zones were crossed four times each!  Another stop was needed in Christchurch, New Zealand before returning to Hawaii.  Total time on the ground during the record attempt was just under five hours.
Minicraft Models added extra parts to the 707, and for the first time, an accurate model of an AWACS was available in 1/144 scale!  These models can be seen on Minicraft's website and you can check out current pricing and availability on Amazon using the links above.
BONUS PHOTOS:  AIR FORCE ONE, SAM 26000

These photos are of SAM 26000, the VC-137C best known for its call sign when carrying the President of The Unites States, Air Force One.  Taken in 2015 prior to completion of a new display hangar at the National Museum of the United States Air Force.  It was a little tricky to get a good overall view of this aircraft since the improvised display annex location was less than ideal with the aircraft crowded together.  You had to take a bus from the main museum to the annex, and you only had an hour to see the presidential planes and test planes hangar!  In 2016, a fourth huge hangar was completed and now, the presidential and test planes can be experienced in one location.  If you visit this museum, you might want to plan on two or three days to see it all!

Panorama mode was used to take this picture, which explains the semi-fisheye view.
SCROLL DOWN TO SEE WHAT ELSE IS GOING ON AT DEMBRUDDERS.COM -- WE'VE GOT ALL SORTS OF COOL STUFF TO ENJOY HERE!