"There isn’t a single aspect of ship’s operations that’s not under his control.  If he were proven to be malfunctioning, I wouldn’t see how we’d have any choice but  disconnection."
COMING SOON:  ADDITIONAL BUILD-PHOTOS AND INFO ABOUT THE MOEBIUS HAL 9000 MODEL KIT.  WE BUILT IT AND IT IS ABSOLUTELY AWESOME!
THE YEAR 1968 BROUGHT US PERHAPS THE GREATEST SCIENCE FICTION MOVIE EVER MADE; AFTER A HALF-CENTURY, 2001: A SPACE ODYSSEY STILL STANDS UP AGAINST ANYTHING THE ACTUAL 21ST CENTURY CAN PUT ON A MOVIE SCREEN!

MISSION BRIEFING:  THIS MODEL WILL MAKE COLLECTORS, MODEL BUILDERS, AND FANS OF THE MOVIE HAPPY!  PREPARE TO DO SOME PAINTING, BUT IT'LL BE AN EASYGOING, FUN BUILD!
Just seven styrene injection-molded pieces comprise the kit.  Two of these are clear plastic.  The most amazing thing that jumped out at me as I opened the box was the size of the model!  I always assumed the Hal 9000 console was about the size of an old corded telephone; maybe ten inches or a foot high at most.  Apparently, the Hal console is actually 14 inches tall! 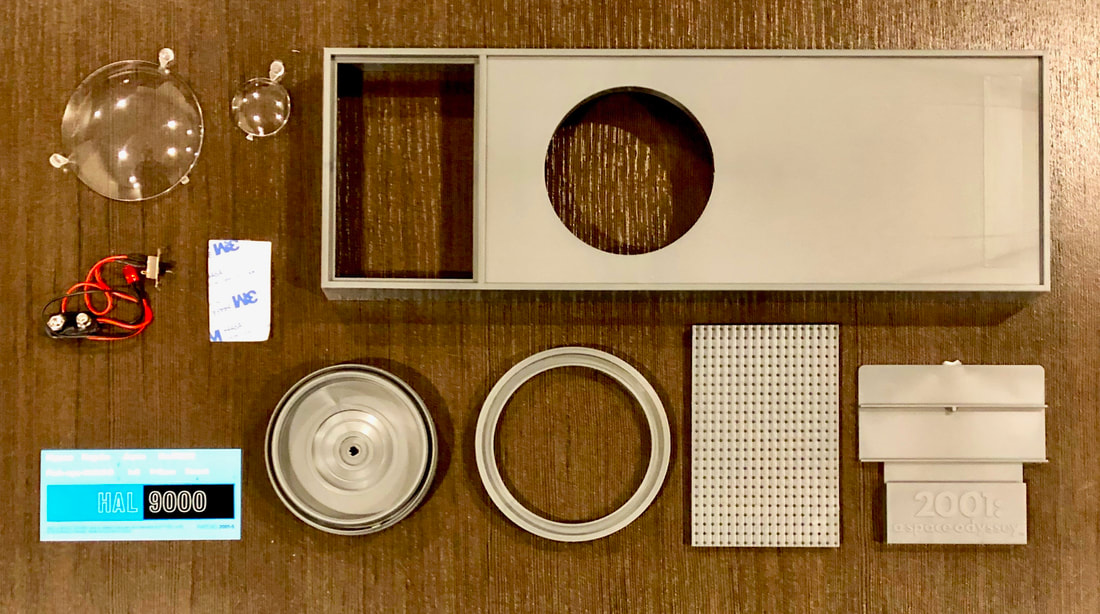 Just SEVEN plastic parts comprise this kit!  Moebius designed it to be very easy to assemble.  Two of these parts are crystal-clear "lenses."  Note the fully assembled LED assembly with battery clip and switch built-in.  Note the decals at left and a piece of double-stick tape is included to fasten the battery to the backside of the console.  A cool stand is included as well so you can display Hal on your desk or shelf if you wish.  Ours is going on the wall!
A red LED is included which brings the model to malevolent life.  It’s part of a complete pre-built assembly including a switch and battery holder; the LED is simply slipped in place on the model with no soldering or wiring connection work whatsoever needed!  You’ll need your own 9V battery to activate your Hal 9000!
The instructions recommend painting all parts before assembly, and this is good advice. Prior to any painting, I'd strongly recommend scrubbing the five light gray plastic parts with some soapy water; dish soap will work great.

The most care needs to be taken with the clear parts.  I’d recommend using a sharp razor blade or hobby knife to carefully cut off those mold ejection nibs on the lenses.  Bending them off will leave small, white stress cracks at the edge of the part.  Set the part on a flat “knife-safe” surface with the nib hanging off; you don’t want to bend the nib before cutting it.  The model builders among us will find this step easy; for those of you who don't build regularly, be extra-careful when doing this!  A single-edge razor blade will work great, or an inexpensive hobby knife like you can find at Hobby Lobby or hardware stores will work great.

Left to right:  Lens Frame, Speaker Grille, and Display Base are shown here.  Lens Frame and Speaker Grille should be a flat aluminum color.  You can paint the display base any way you'd like, but I'll probably paint mine black with white lettering.  Stay tuned; we'll provide an easy way to paint the lettering perfectly!
We’re planning a full build with a YouTube video to follow; yes, Dem Brudders will board the Discovery to address some issues with the onboard computer.  Did we mention that it controls all aspects of the ship’s operation?

Moebius Models provides broad advice for paint: “The general paint colors described are suggestions only.  Feel free to choose colors of your own liking or colors that you feel best represent the original props as seen in the film.”
Apparently, an off-the-shelf Nikor F-mount 8mm fisheye lens was used as Hal’s famous cyclops-eye.  Internal non-optical components of such a lens are typically flat black to prevent reflections, so that color and sheen are appropriate for the insides of the lens mount/focusing ring.

A small tab on the lens mount/focusing ring part appears to be a molding stub.  I haven’t detected an actual tab matching it on the Hal prop, so this could probably be trimmed off.  Such a protrusion wouldn’t be on the 8mm fisheye lens that the “eye” of Hal is based on—it would show up in the field of view of the lens.  It’s not exactly a distraction; if you’re not an experienced builder accustomed to correcting such things, you could probably be fine leaving it as-is if you want.
​The model faithfully represents the Hal 9000 console as seen in 2001:  A Space Odyssey.  The only minor enhancements I would consider for the builder to try are those that would not be seen.  Some sort of hanging bracket on the back of the model might be desirable for those who might wish to hang the model on a wall.

The other enhancement might be some sort of retainer device for the battery attached to the back of the model besides the double-stick tape provided.  Sheet styrene might be useful to fabricate a box to hold the battery in place.  Sheet styrene could also be used to make the hanging bracket as well.
Instructions continue Moebius' theme of swanky-looking graphic design.  Full color is used, and they use glossy, high-end paper and printing.  Of course, we like it!
Moebius Models brings a new, unique kit subject to modelers, collectors, and fans of the classic science fiction movie, 2001: A Space Odyssey, and they did a great job!  We’ve seen some major wish-list subjects from 2001 that went unfulfilled as injection-molded kits for decades, but it was Moebuis Models who finally brought them to us.  The execution and attention to details has made them worth the wait!

Dem Brudders give this model an enthusiastic four thumbs up, our highest rating!

We'd like to thank Moebius for sending us this kit and we're thrilled to have them as a sponsor to the site!
Here are Amazon sponsor links for all the Moebius models currently available.  Note pricing and availability subject to change.
BONUS MATERIAL

We love 2001: A Space Odyssey.  Stay tuned as we add some bonus features to this article!

Thanks for visiting.  Scroll down just a bit to see what else is new at Dembrudders.com.