ATLANTIS MODELS RE-RELEASES AN ICONIC MONOGRAM KIT FEATURING A HISTORIC SET OF U.S. MILITARY MISSILES AND ROCKETS
Atlantis Models has re-released the former Monogram U.S. Space Missiles set in 1/128 scale.  This kit provides an interesting collection of military missiles of various types and sizes in-use prior to 1970.  The model hasn’t been available in nearly 40 years.  Previously, it was a Monogram “Heritage Edition” kit released in 1983.
​
BY BILL ENGAR

THIS IS A FEATURE-IN-PROGRESS.  CHECK BACK LATER AS WE ADD CONTENT.

The Atlantis Models box uses a former Monogram company photograph for this release of their "U.S. Space Missiles."  You may remember it from the 1983 "Heritage Edition" version of the kit.  It hasn't been released since then.
Monogram Models is fondly remembered for a number of groundbreaking model kits.  For example, their B-52 in 1/72 scale was one of the first "superkits" followed by their 1/48 B-17 and others including the 1/48-scale B-29 and 1/72 B-36.  Much earlier, they experimented with some collection-kits including an earlier version of this kit that first debuted in 1958 and the legendary Air Power set that followed in 1959.  Stay tuned for our bonus features where we'll take a deep-dive into the Monogram collection kits which include the Missile Arsenal, Air Power set, and the USA/USSR Missile Set. 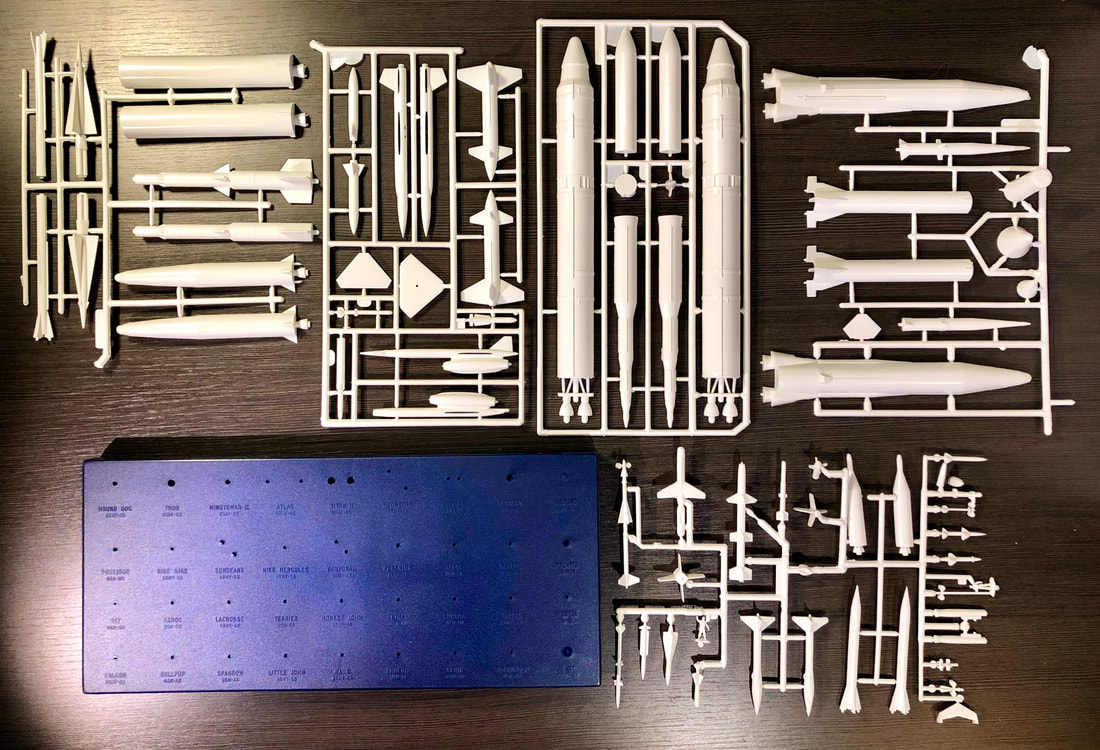 71 styrene parts are included for 36 missiles.  The blue base has raised lettering with the names and official numeric designations for the missiles.
Originally, the model was released as the United States Missile Arsenal in 1958.  Composition of the set was a little different.  In 1969, the set was reintroduced with some updates.  We’ll discuss the specific changes in our Bonus Features that will accompany this review.

The term “Space Missiles” is a bit of a misnomer.  Back in 1969 when the kit was retooled, the Space Race to the moon was reaching its climax.  Monogram decided to make the kit relevant to the excitement of the era by naming it the Space Missiles set even though Missile Arsenal would have been a more accurate title.  However, with many modelers, the Space Missiles designation for the set carries a lot of nostalgia and Atlantis decided to take advantage of this. 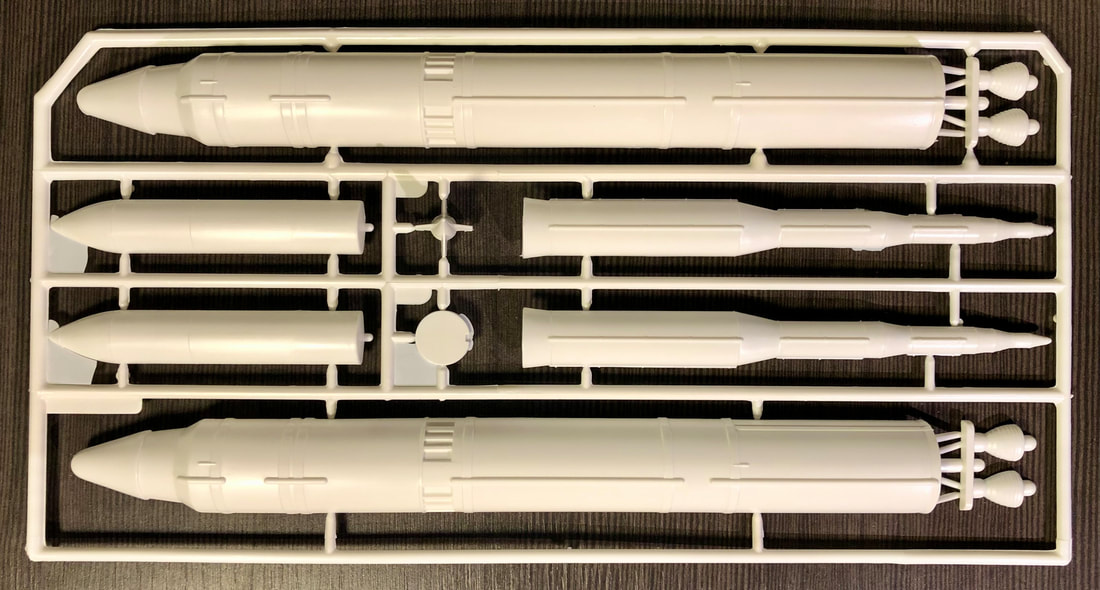 The Titan is the largest missile in the set and is composed of only two parts.
The missiles in the set are many variants of ground-to-air, air-to-air, and air-to-ground weapons that were used by various United States military services.  They range from the Dart, a 5-foot, 100-lb antitank missile to the 103-foot Titan II ICBM.
The models are molded in white plastic.  The smaller missiles are one-piece.  The kit is easy to build. Fit of most parts is very good; probably better than most kits of the eras.  Most of the missiles have fine, raised panel lines typical of Monogram kits.  Monogram Models was beloved by many young modelers and developed a strong reputation for nicely detailed and fairly accurate models and this kit reflects this philosophy and engineering.  Modelers will find a small amount of flash and minimal sink-holes.  Some of the missiles have ejector pin-marks but only contest modelers will probably care about these.  Parts prep was fun and easy and assembling those missiles that were multi-part was a cinch.  The one-piece missiles have mold parting lines that were easily cleaned up.  In a nutshell, parts prep and assembly is very easygoing and this model was very fun to build!
As part of Atlantis Models' educational STEM series of kits (Science, Technology, Engineering, Math), a special poster-sized "Know Your Missiles" sheet is included with vintage historical information about each rocket and missile along with a photo.  This was not included with the 1983 Heritage Edition of the kit.  Instructions utilize artwork from the 1969 version of the kit as well.  It's nicely done and has specific painting instructions to finish each missile as they appear on the box photo.  The instructions note: "The color scheme used on the missiles is frequently varied to suit the firing conditions and purpose.  A suggested color trim is given in the assembly sketches."  When I built my original model (1983 version), I utilized these versions.  They are an eclectic mix of operational and test or even mockup  versions of the missiles.
The offset-fold in the instructions provides an artful presentation.  Clear assembly diagrams and descriptions provide excellent guidelines for finishing the missiles.  Each missile is keyed to fit properly on the display base and of course the instructions provide identification to match each one with its proper location on the plastic base.
BONUS FEATURES
BUILD IT!

After some minimal cleanup, the missiles in halves can be glued together.  We like to rubber-band them at least overnight to be sure the parts have a strong weld.
The larger missiles come in halves.  After applying glue, we like rubber bands which will provide a stronger bond.  Occasionally, you'll get a subtle shadow-seam over time as the glue fully cures.  This might take months to happen.  It's generally not very noticeable to anyone but a very picky contest judge, so most modelers shouldn't care about this.  Using rubber bands greatly reduces this phenomena.  If you use liquid cement, be sure not to apply it with rubber bands in place.  It's likely that the glue will run between the model and rubber band on the outside of the model.  This will complicate your cleanup after removing the rubber band and may damage raised details.

What you see here is the putty work needed to take care of ejector pin marks and most sinkholes for our contest-quality build.  It's minimal compared to many other kits.
Less than half of the missiles had external ejector pin marks.  If you're not interested in buidling for a contest, you can probably ignore these.  As noted in the accompanying photo, they'll be on only one side of the missile and you can simply orient them towards the back when you glue the painted missiles to the base.

The missiles molded in halves had all their ejector pin marks on the inside where they can be completely ignored.  With the mold registration being pretty good on the previous issue and cleaned up pretty well by Atlantis, some minor sanding is all that will be needed to clean up the seams on the missiles made in halves.
In the mid-1980's, I bought and built a 1983-vintage Monogram Heritage Edition of the Space Missiles kit.  I didn't pay much attention to doing a perfect job; it was a purely fun-build.  I used an airbrush for most of the painting along with hand-brushing for details like the fins on the Little John and Hawk missiles.  Looking back, the only do-over's I would want if given the chance was to give some of the hand-brushing a second go-around, and I would have avoided the use of Testors clear-gloss lacquer to clearcoat the missiles once they were painted.

The biggest problem I experienced with Testors lacquer is a nasty tendency to yellow over time.  This is fine on for anything that isn't white.  Testors does make a clear ENAMEL gloss that I've used and it doesn't appear to yellow nearly as badly. 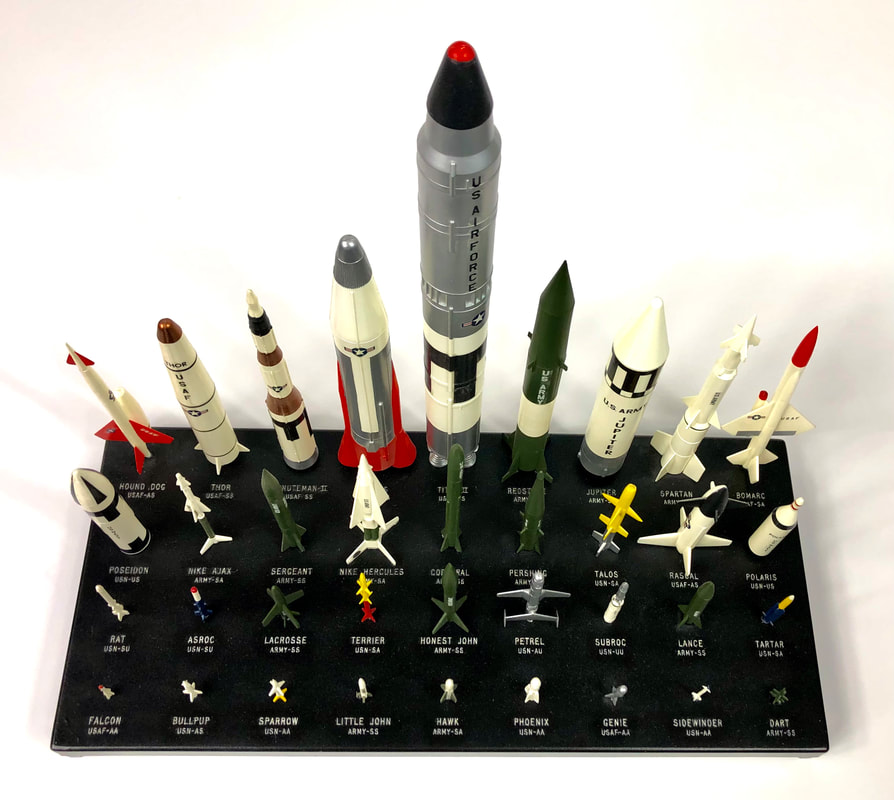 This was a fairly quick (1980's) build with little if any putty used.  Obviously the painting comprised most of the effort.  With perhaps the exception of the Atlas Missile, none of the paint process was anything other than simple.
Finishes on the models would probably be gloss or semi-gloss according to your preference.  Anything "green" (olive drab) would most likely have a flat finish or semi-gloss at its shiniest.  Anything with a metallic finish will probably be most accurate if done to replicate an aluminum finish; that is to say not very shiny.  The sole exception would be the tank on the Atlas missile.  The Atlas had a stainless steel tank that was polished to a sheen that would be noticeably brighter than that on the aluminum Titan II. 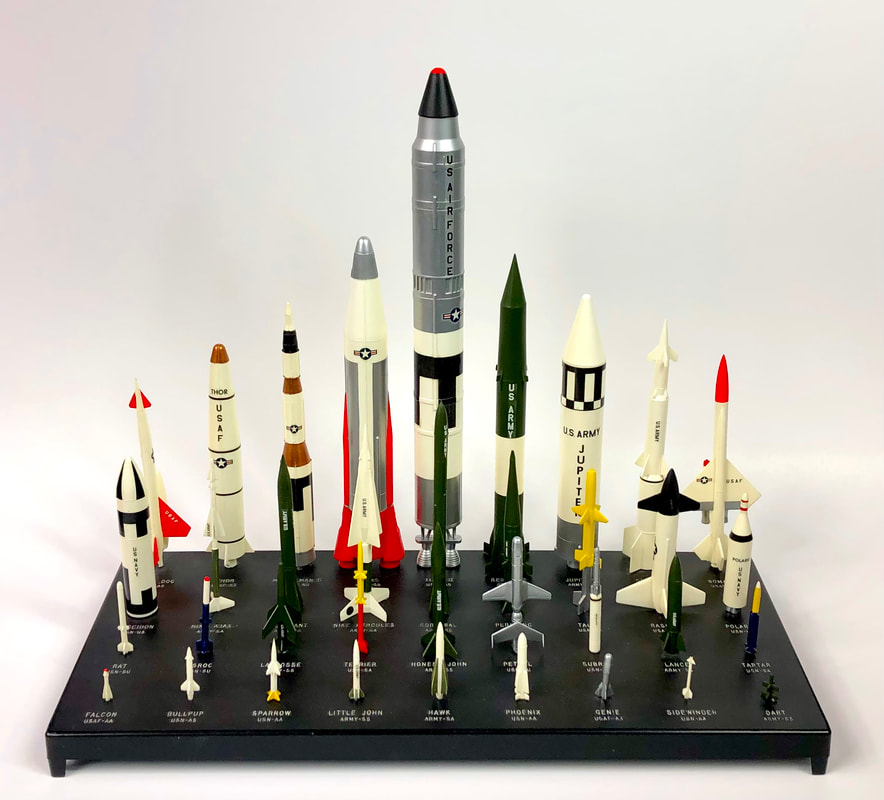 The lettering is finely raised detail.  There are a couple ways you could paint it.  One would be to use a rough-mask of tape covering the area just outside of the titles and dry-brush the lettering. This is probably the best solution if you want to leave your base in its unfinished molded-in-blue-plastic glory.  I used a trick that required a little more effort.
The model's base has fine, raised lettering.  Without any sort of contrasting paint enhancement, it can be a little hard to see.  While building this model circa 1985, I came up with a trick that I use to this day for painting raised lettering commonly found on display bases. The basic trick is to paint the entire base white, over-coat that with your final base color, and carefully sand down until you reach the white paint on the raised lettering.

To make this easier, before doing any painting, gently sand the lettering so the top of all the lettering is flattened down slightly.  You basically want to see that it has been touched by the sandpaper and has a flat area that will hold the white paint without easily being sanded through.  Give the base a pretty thick coat of white paint (or whatever light color you wish your lettering to be).  Let that dry well for at least a day or so, and then apply your desired base finish just thick enough to cover the white completely.  This needs to dry thoroughly.  Take some fine sandpaper (about 400-grit) and carefully sand through the base color over the lettering until you can see the white color underneath.  If you accidentally sand too far, touch-up with a very fine paintbrush or even a tiny amount of lettering paint on a toothpick.  This is a nifty technique for anything with raised lettering!
While our Monogram version of the Space Missiles kit has been finished for about four decades, our Atlantis version is a work-in-progress.  We'll update this page as that effort is ongoing.
When I worked on my first Space Missiles kit, the Internet was still science fiction for the most part.  Today, there are many references available for alternate color schemes for these missiles.  I've decided that my current version of the Space Missiles kit will use decor differing from kit-supplied for many of the missiles.  Most often, the test-schemes used in development of these missiles used high-visibility colors.  Once in operation, the missiles were perhaps left unfinished or camouflaged.  Many of the U.S. Army missiles in the set can be identified quickly by the fact that they are painted in olive drab.  It's known as "Army-Green" for a reason!  However, in development and testing, many Army missiles had high-visibility.  For example, test-versions of the Pershing I may have had an olive-drab finish, but lower stages had bright orange stripes and the dummy-warhead was white with black stripes!
STAY TUNED AS WE FINISH THIS PAGE!  WE HAVE SOME COOL BONUS FEATURES ON THE WAY!