SYNOPSIS:  Don’t be wary of this particular sequel!  Atlantis has given Godzilla fans and modelers alike a treat in the form of a perfectly executed reboot of the classic Aurora Godzilla model kit with extra “Glow Parts.”  Buy, build, or collect with confidence. 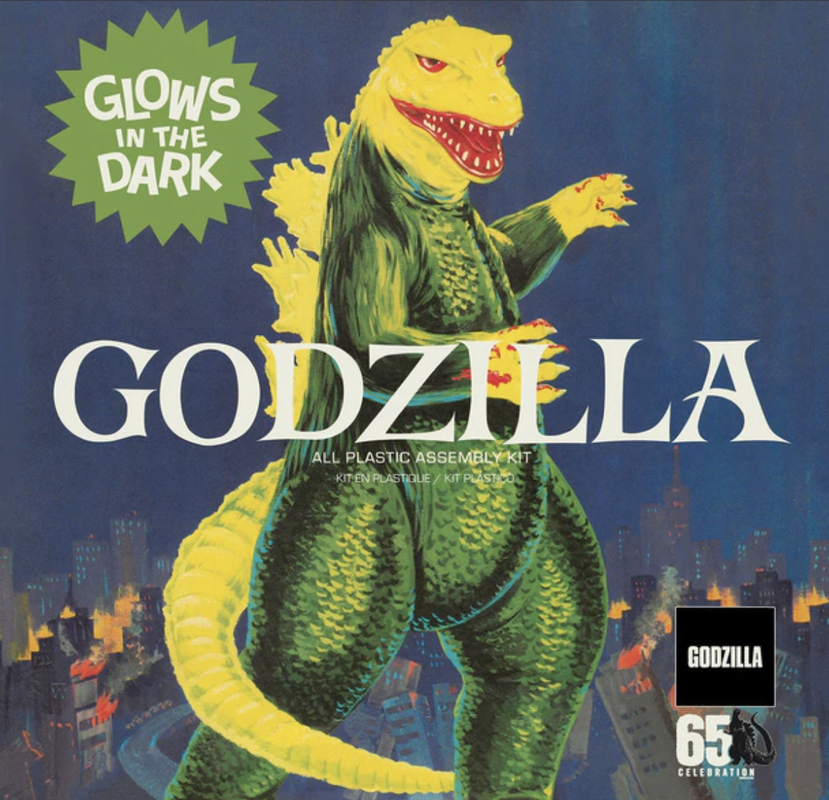 In 2020, Atlantis began using square boxes as a nod to classic Aurora Company plastic model kits from the late 1960's and early 70's.  This is the BIG square box just shy of ten inches on a side!  And it's crammed full of classic Godzilla plastic!
It’s rare when my expectations are exceeded after opening a model kit, but they definitely were here.  Atlantis Models has converted many of their latest kits to a square-box format, but this is the large, roughly 10X10X4 format that Aurora used back in 1970.  One of Aurora’s strategies was to put their models in a bigger box than was needed to provide the illusion that modelers were getting more than was actually there.  Atlantis certainly doesn't do this here.  That extra-big Aurora-format box is needed to fit Godzilla.  What else would you expect from the King of the Monsters?

Here is a shot of all the plastic that comes in the kit -- There is a bunch of it between the figure, base, and glow-parts, at right.  That glow-sprue is 9.25" square by itself!
Aurora first tooled and released Godzilla in 1964.  The latest Godzilla movie at that time was the third installment, Godzilla vs King Kong.  In that Toho film, Godzilla sported a distinctly reptilian appearance to distinguish him from his simian rival.  Godzilla had bigger eyes and alligator-like jaws faithfully depicted in the Aurora kit of 1964, which is now the Atlantis kit of 2020.

This is just the plastic for the figure alone - remember, Godzilla is a big guy!
The first Aurora incarnation of Godzilla came in a long box.  Being one of the later entries in Aurora’s wildly successful line of monster kits, the company went all out to impress young modelers who already had built the likes of The Mummy, Phantom, Frankenstein’s Monster, The Creature, Wolfman, and Dracula.  Godzilla was a big figure with a lot of plastic but he also came with a very detailed diorama base.

This view shows all the parts to the base in addition to the sprue containing Godzilla's hands, forked tongue, and lower jaw.  Normally, you'd have to buy an aftermarket resin kit to get an enhanced base like this--but Aurora Models included it with Godzilla originally, and Atlantis faithfully represents it here.
Aurora’s monsters were huge sellers for the company from their 1962 debut, but by the late sixties, the sales slowed.  In 1969, they revitalized the line by including glow-in-the-dark parts!  Key features such as hands and heads were duplicated in a separate mold from the original kit masters and grouped on a new sprue with a handful of other key pieces from the kit that would make a creepy, glowing display.  The new square boxes left no doubt that these latest kits had the special parts.  Box art was updated by Aurora—for better or worse, some might say—with a depiction of the parts of the figure that would glow if built with those parts. Atlantis’ box reflects this 1970 version, the first time it has reappeared since its debut a half-century before.  This model kit will probably become a collector’s item in its own right with a big, new “A” version of the Atlantis trademark and a special logo commemorating the 65th anniversary of the first Godzilla movie.
In Atlantis’ Godzilla, a new square glow-sprue with duplicates of the other parts fills the entire bottom of the box.  Other parts are molded in a nice, reptilian-green plastic that might have a hint of metallic sheen similar to the original issue.  Modelers who want to do little to no painting should be delighted by this choice of lizard-green plastic.

Godzilla's dorsal plates have an otherworldly appearance.  Of course they're included in duplicate with the glow-parts.
It needs to be made clear that the 1964 kit with all its original parts is included.  All the glow-parts are duplicates of pieces that are already in the box.  So a standard, green Godzilla can be made with no painting if the modeler so chooses.  I’ll probably build my Godzilla like the classic non-glow variety and the square sprue is cool enough on its own that I’ll hang it on my wall as-is.  Or, I might just get another kit so I can incorporate the glow-feature!
Promotional materials for Godzilla depicted him as green.  In fact a promotional poster for the U.S. release of Godzilla King of the Monsters shows a green Godzilla.  In King Kong vs Godzilla (1962), the first movie shot with color film, it was revealed that Godzilla is dark-gray, or black with dark gray highlights.  The original Aurora box portrayed him in a nice, reptilian-green and of course, the plastic was green.  With this in mind, you can finish your Godzilla however you want; either color is "authentic!"
Note that if you paint over the glow-plastic with anything but a translucent color, you’ll lose the glowing feature.  A suggestion is to pick the parts you’d like to glow, and use an airbrush to feather the lines between the glow-parts and whatever color you choose to paint the regular plastic.  Another suggestion would be to leave the edges of Godzilla’s famous dorsal plates in glow-plastic, and airbrushing the rest the body color you choose.  Leave the claws on his hands and feet in natural plastic, and some of the "nubs" on top of his tail unpainted.  If you also left the inside of his mouth raw glow-plastic as well (or maybe painted it with a transparent-red), you’ll get an interesting effect when the lights go off.
Atlantis has reproduced artwork from the original Aurora Godzilla instructions.
SPECIAL THANKS TO ATLANTIS MODELS FOR PROVIDING A SAMPLE OF THIS KIT TO REVIEW!!!
BONUS MATERIAL:  MORE ABOUT GODZILLA

If you’re not familiar with the Godzilla franchise, the best place to start is by watching the original 1954 film.  You can’t go wrong with either version; the original Japanese release of 1954 (with subtitles if you don’t understand the Japanese language), or the 1956 adaptation for audiences in the USA.  This one had a dubbed English soundtrack and the addition of new scenes for the American release with Raymond Burr.  Burr, as reporter “Steve Martin,” does little more than comment on events portrayed in the film.  Still, both movies were landmark entries in horror film history and they are every bit as entertaining as they were about two-thirds of a century ago when they first debuted!
1933’s King Kong was hugely successful upon its original debut, and it saw re-releases to theaters every four years after its initial run.  The 1952 theatrical release inspired development of Godzilla’s special effects.  Producers made the decision to avoid the stop-motion technique used for Kong, instead putting actors (Haruo Nakajima and Katsumi Tezuka) inside a suit to interact with miniatures (models!).  Filming this "Suitmation" action in slow-motion helped provide the illusion of size and mass.  The original Godzilla had much of this action filmed in a dark studio to effectively simulate a nighttime destructive rampage and the visuals are still striking even after years of special effects expertise has improved upon the techniques first tried in Godzilla.  Perhaps it's the extensive and impressive model work that is one aspect of these films that has made me a longtime fan of the series.
This is how I saw the original Godzilla King of the Monsters!  Getting permission to stay up beyond normal bedtime was tricky, even on Friday nights.  Adding in the complicated logistics of planning a sleepover often required negotiating skills like Henry Kissinger.  Then, there was the random chance that the night would be spoiled by getting a really bad B-grade movie, like The Brain that Wouldn't Die.

The event was a classic Friday night celebration for me and three or four of my neighborhood pals since we scored a late hamburger meal at the local drive-in.   Back at home, after getting sugar-charged with a big bag of candy, we were delighted when the original Godzilla King of the Monsters movie came on Nightmare Theater.  We knew we were in for a fright.  Somebody there had already seen it and told us how scary it was.  I must say at age seven or eight, it was a rather intense late-night experience.   This particular friend had one of the scarier basements in the neighborhood, where we resided in front of the TV for the movie in laid-out sleeping bags.  As I recall, one of the other kids was so scared, he insisted on sleeping with the lights on after the movie was over.  Looking back, it was a perfect evening!
During the 1990's, many wondered if Hollywood, USA could come up with a Godzilla film that was better than the Japanese-produced Toho films.  After the debut of Tristar's Godzilla in 1998, the answer was a resounding "no."  In spite of star-talent, audiences and Godzilla fans in the USA and elsewhere did not respond well to this interpretation of Godzilla.

Toho's Godzilla 2000 had a release in theaters in the USA, and I remember going to my local theater with my kids to see this movie.  This one was pretty well-done and on DVD or Blu Ray disc, with a good sound system, you’ll feel Godzilla’s footsteps!
COMING SOON:  THE SCIENCE OF GLOW-IN-THE-DARK
Stay tuned.  Brudder Bill uses his experience in the nuclear industry to explain how Glow-in-the-Dark works.  SPOILER:  It's completely, 100% safe.