THIS PAGE IS UNDER CONSTRUCTION - WE HAVE SOME AWESOME STUFF COMING UP HERE, SO CHECK BACK LATER FOR MORE GREAT CONTENT FROM DEMBRUDDERS.COM

​MINICRAFT MODELS HAS THREE KIT LINES (C-130, B-52, KC-135) IN THEIR VAST 1/144 SCALE MILITARY CATALOG THAT HAVE THE DISTINCTION OF PORTRAYING AIRCRAFT THAT HAVE BEEN IN SERVICE WITH THE U.S. AIR FORCE FOR OVER HALF A CENTURY.  EACH  OF THESE SIGNIFICANT AIRCRAFT TYPES HAS BEEN GIVEN FIRST-CLASS TREATMENT BY MINICRAFT WITH MULTIPLE VARIANTS AVAILABLE, GIVING MODELERS THE OPTION OF PORTRAYING THE AIRCRAFT IN EARLY OR LATE VERSIONS.  JOIN US AS WE EXAMINE MINICRAFT'S KC-135 KITS IN-DEPTH.
By Bill Engar

IN-A-NUTSHELL:  Minicraft uses state-of-the-art technology to execute a first class kit of an iconic aircraft.  All the boxes are checked for the important things such as accuracy, ease-of-construction, details, and decals.  This is simply a drop-dead gorgeous kit!  You'll want to collect each of the variants!

In this review, we'll take a look at all four Minicraft KC-135 variants.

The KC-135 has been in service with the USAF since 1957.  Revell released a model of the aircraft that same year.  For many years, Revell's KC-135 was the model you bought if you wanted to build one of these aircraft in 1/144 scale (or more accurately, near 1/144 scale!!).  The last Revell KC-135 release was in 1982, however, and the model was getting hard to find since then.  Welsh Models made a vacuum-form version, but this one could be tricky to find as well. 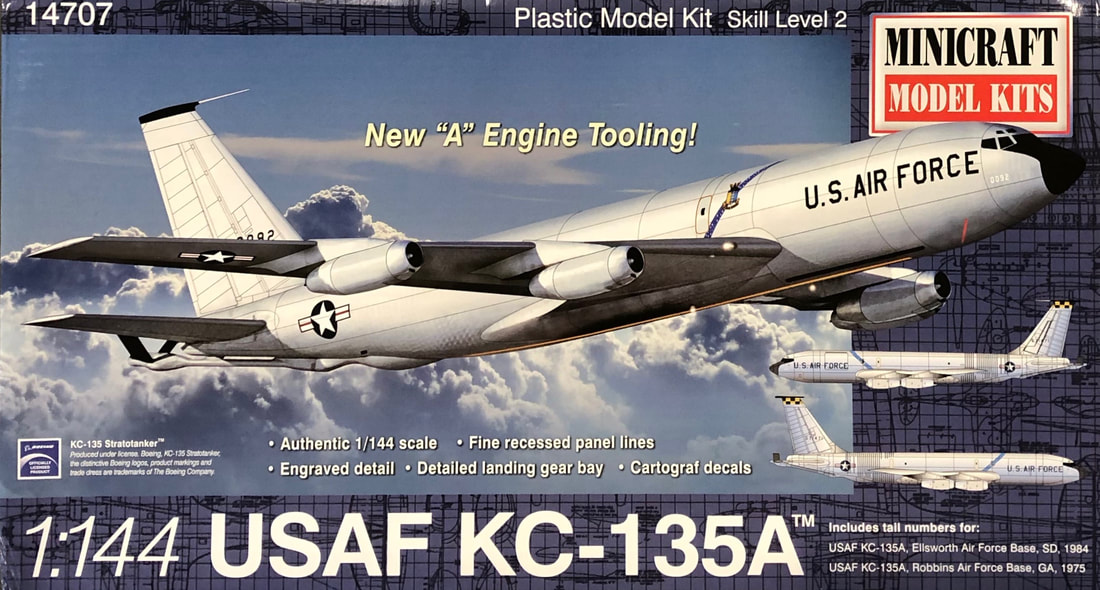 The open-box portion of our review will focus on the KC-135A.  It is not the first kit in the series to be released, but the "A" is the initial variant of the KC-135 to fly.  J-57 turbojet engines distinguish this version.
I wondered how interested I’d be in a new, injection-molded KC-135 once Minicraft announced that they were planning to release one.  After all, I already had a stash of the Revell kits.

Once the Minicraft KC-135 was released and its details were divulged, I was excited to get one.  Minicraft took serious measures to be sure that modelers would want the new KC-135!  For starters, the model was extensively researched.  Simply putting a refueling boom on a 707 and calling it a KC-135 did not fly here.  The KC-135 has a narrower fuselage than the 707.

Your choice of two aircraft can be depicted with the decals included in the kit.
The prototype 707/KC-135, known as the 367-80, or "Dash-80," had a 132-inch fuselage width suitable for five-abreast seating in passenger-form.  Boeing decided that six-abreast seating was a better choice, and the fuselage for both KC-135 and 707 changed to 144 inches.  Tooling was cut, but in order to guarantee passenger version sales to American Airlines, the fuselage width on the 707 was changed to 148 inches in order to provide more shoulder room than the competing DC-8.  Width for the KC-135 was left at 144 inches.
The Minicraft KC-135 has accurate detailing such as the stiffening bands around the rear fuselage.  The under-fuselage “bubble” representing the refueling station is correctly proportioned.  Engraved detailing is extensive and includes many features unique to the KC-135.  Minicraft Models released their own Intercontinental 707 some years ago, and the new KC-135 kit shares no relation to that effort.
There is no interior, although Minicraft includes a clear cockpit  “canopy” piece.  The cargo door is molded-in, but includes detailing on the inside giving a scratchbuilder opportunities to cut the door open and add an interior.  Doing so anywhere except in the proximity of the door will make it difficult to see any of that detail, however.  If you feel the need to build the internals of a KC-135, like my Brudder Dick, AMT’s KC-135 kit has a fully detailed cockpit right out of the box in 1/72 scale.  Most of that won’t be seen when the fuselage is glued shut, either.
I found a few subtle sink marks that might not bother anyone except the persnickety contest modeler.  Filling these should not hurt any detail.  The engines on my “E” version have rather thick edges at the exhausts, but this was easily fixed with a few shaves with the hobby knife and sandpaper.  The “A” version has nicely executed exhaust cones so no extra work will be needed there.
Minicraft’s decals are made by Cartograf.  This means high-quality all the way.  You’ll need a magnifier to see the fine details, and they’ll go on easily.

Other reviewers have commented on the heavy sprue attachment points on some parts.  You do need to take some extra care while removing the parts.  Note, however, that the ejector pin locations are on the sprues with fewer on the parts themselves.  It's much better to have these sometimes pesky critters on the sprues instead of on the parts themselves, isn't it!  Who fills ejector pin marks on the sprues anyway?
The instructions include a short history, and a parts locator map, which make it very easy to identify parts even if you've already removed them from the sprue.  Assembly steps are straightforward.  Don't forget to put weight in the nose to avoid a tail-sitter. 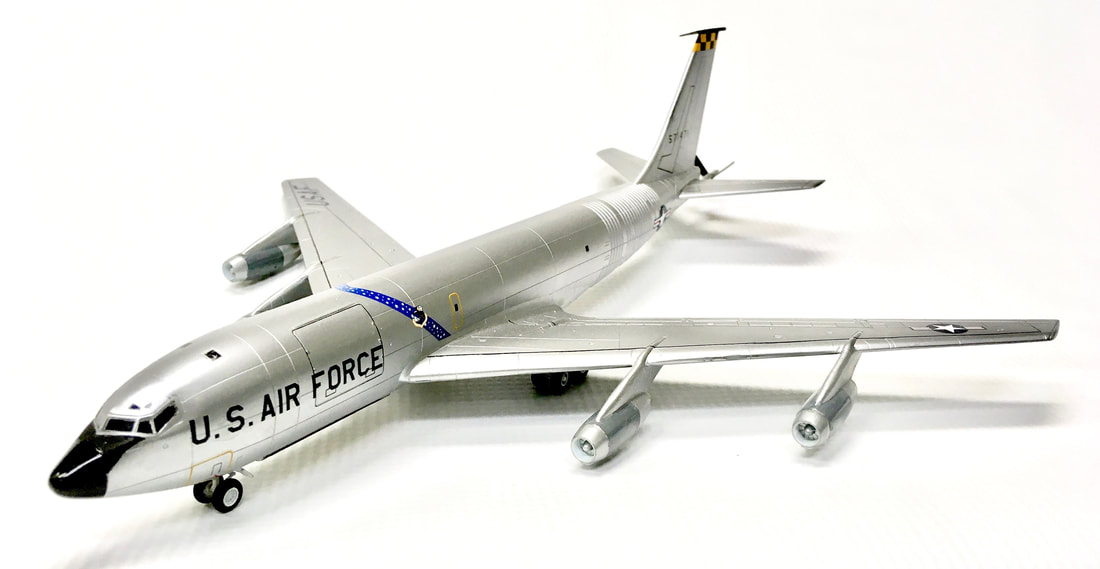 Brudder Dick's Minicraft KC-135A finished in silver guise.
A lot has changed in the modeling world in fifty years.  Minicraft took full advantage of the technological advancements during that time to create a KC-135 kit that is worlds better than the old Revell standby.  The KC-135 is an important aircraft to the U.S. Air Force, still in service since 1957.  This kit is a great tribute to this plane and may well be one of the best 1/144-scale kits out there.  Dem Brudders endorse and recommend these kits with four thumbs up!
MINICRAFT'S KC-135E 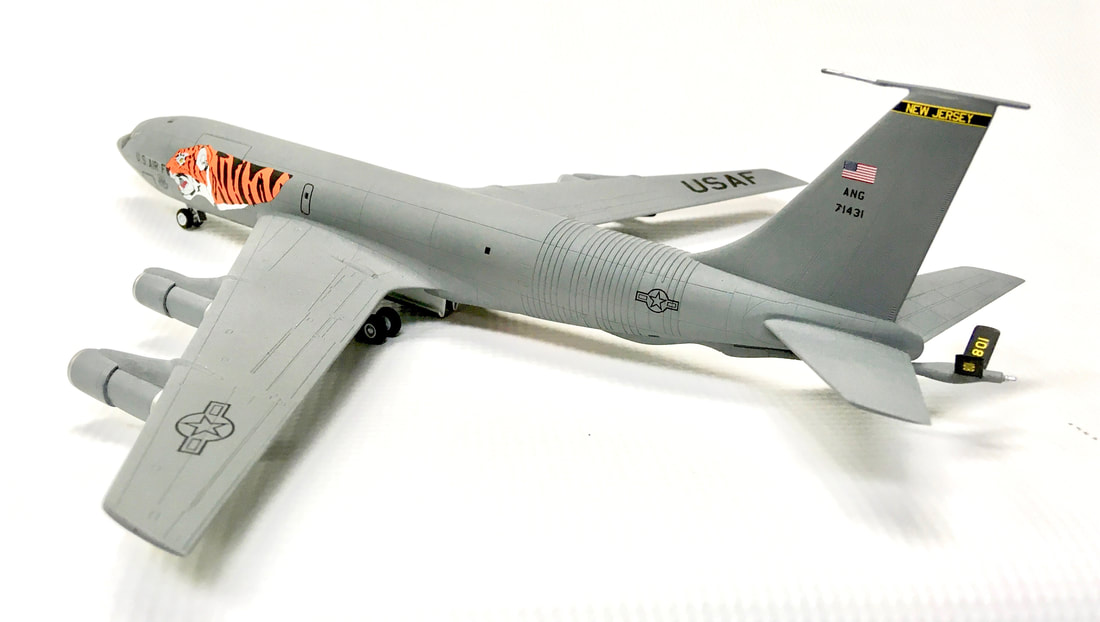 MINICRAFT'S KC-135R
The KC-135 was known for being underpowered in its early incarnations.  Adding high-bypass turbofans to the KC-135 in the form of the CFM56 engine nearly doubled engine power compared to the early versions and some pilots referred to the KC-135 as a "hotrod" after this.  Once the retrofit was completed, the KC-135's became known as KC-135R's.
In 2005, Minicraft came out with an exceptional DC-8 kit, which included CFM56 engines (to make a DC-8 Series 71 aircraft).  They actually sell the engines from this kit in a separate bag!  So you could assume that the same engine sprue would be included to make a KC-135R, right?  Nope!  The engines to the KC-135R were newly-tooled for the "R" variant, and they are absolutely gorgeous! 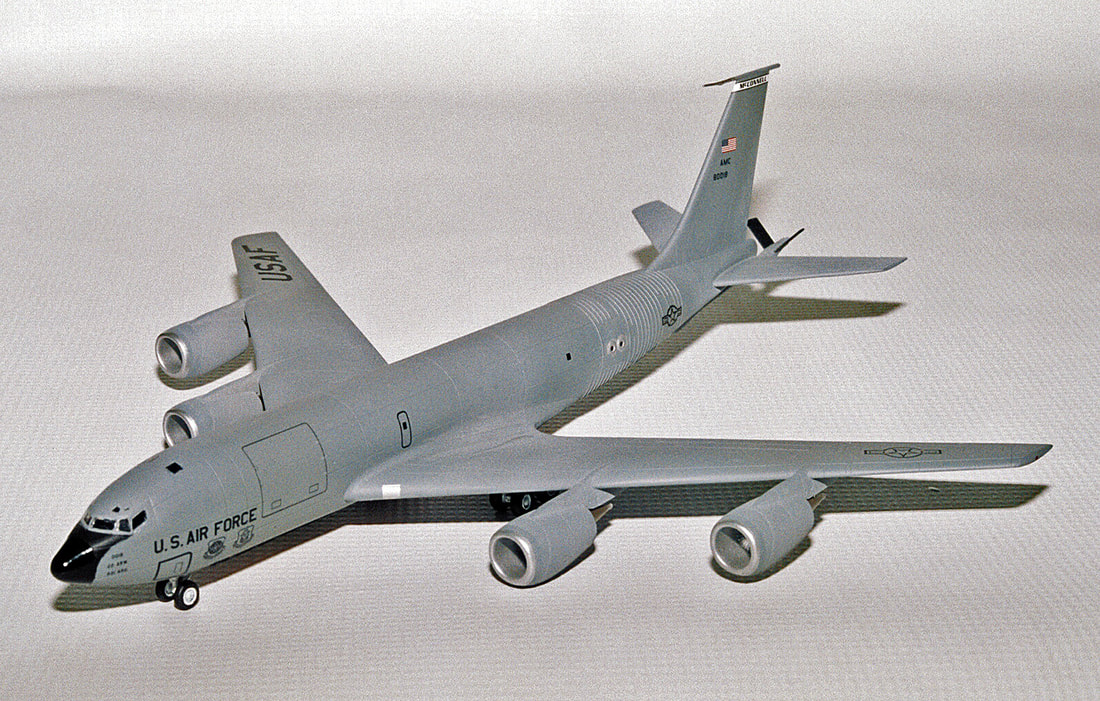 MINICRAFT'S EC-135C
The KC-135 was designed as an air-to-air refueling aircraft with cargo hauling a secondary role.  The airframe proved effective and reliable and was soon adapted by the USAF for reconnaissance and command-and-control missions.  Minicraft's latest member of their KC-135 family is the EC-135C.  This aircraft has been called the "Doomsday Plane." 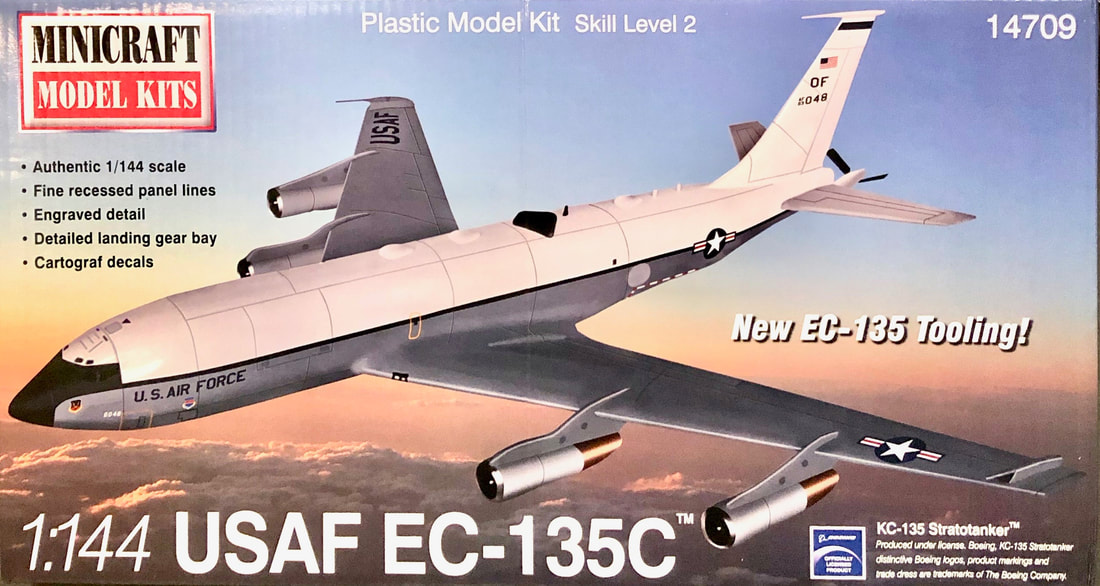 Minicraft's "Looking Glass" EC-135C kit has new parts to depict its Cold War "Doomsday" mission.
During its Looking Glass role, at least one EC-135 aircraft was airborne 24 hours a day, from February 3, 1961 until July 24, 1990, an astounding 29 years.  Minicraft Models has created new parts to depict the plane in its ominous role.  If needed, the EC-135C was capable of relaying launch commands for the USAF's ground-based ICBM force if the normal launch control centers were disabled during an attack.  While the continuously-airborne Looking Glass missions quit in 1990, the EC-135's stayed on constant alert whether on the ground or in the air.  In 1998, the US Navy's E-6 Mercury, based on the 707, took over the mission.  As stated earlier, the 707 is a close cousin of the KC-135 via its Dash-80 roots.
The EC-135C has some small "stick" antennas not portrayed in the kit.  If a modeler wishes to depict these, the best way is to get some thin nails that are the right diameter.  Notches can be cut in the kit centerline on both fuselage halves at the right locations, and the nails can be cut to the correct length (factoring for the thickness of the fuselage) and glued into one half with epoxy glue with the nail head even with the inside of the fuselage.  When gluing the fuselage together, a dab of epoxy on the exposed half of the nail head will provide additional reinforcement.  This method will make for very durable antenna that will not break off during finishing of the model.

Similar schemes for two Offut-based aircraft are included.  Stay tuned for more from Offut AFB later in this article.

A large Cartograf decal sheet includes all markings needed to depict a historic Cold War "Looking Glass" aircraft in Minicraft's EC-135C kit.
One of the very cool components included with the new parts is the trailing-wire antenna housing and the funnel drogue for the antenna end.  This system would unfurl a very long wire (2.5 mi/4 km) running a very low frequency signal capable of communication with submerged fleet ballistic missile submarines.  The small cone piece is the funnel drogue; you can thin the trailing edge of this part from the inside of the cone to increase realism.  Awesome!
So there you have it; Minicraft racks up another winner with a historically significant entry in their KC-135 family of model kits.  Dem Brudders give this kit and the rest of the kits in the series an enthusiastic four thumbs up!

I asked Lewis Nace, president of Minicraft Models, if there are plans in the works to add additional variants of the KC-135 family.  He said that for now at least, the series will stand at these four variants as he focuses on bringing you some other exciting new model kits.  Of course, we know that plans could always change in the future, and there is nothing to stop the modeler from modifying Minicraft's kit into the version of their choice!​

​We've got some amazing "Bonus Material" coming up for this article!  Stay tuned!  Dem Brudders were fortunate to get ramp access for a closeup look at a current Rivet Joint mission aircraft, the RC-135V, at Offutt Air Force Base!  We'll provide enough photos for you to build your own model of this cool C-135 variant!  Other great conversion ideas for the Minicraft kit include NASA 931, the zero-gravity "Vomit Comet" trainer aircraft, and the "Dash-80" 707/KC-135 prototype!  We'll post photos of those, too!