THE BOEING 707 IS ANOTHER OF THE ICONIC AIRCRAFT THAT MINICRAFT MODELS HAS RELEASED IN 1/144 SCALE.  THE 707 IS ACKNOWLEDGED AS THE AIRLINER THAT REVOLUTIONIZED AIR TRAVEL BY USHERING IN THE "JET AGE."

Ironically, the 707 didn’t last as long in commercial service as its lesser rival the DC-8, but it found an enduring second life in military applications.  Of course its refueler cousin the KC-135 is well known for its contribution and history in military service, but the 707 airframe is also in use as the Boeing E-3 Sentry, perhaps more commonly referred to as the AWACS (Airborne Warning and Control System).  The J-STARS is a later incarnation as well.
BY BILL ENGAR

SHORTLIST:  MINICRAFT MAKES A 2-FER:  YOU GET YOUR CHOICE OF THE BEST 707 AWACS IN 1/144-SCALE PLUS THE ONLY 707 J-STARS IN ANY SCALE IN ONE KIT.  NEW PARTS AND TOP-QUALITY DECALS PROVIDE A MILITARY UNIFORM FOR THE ICONIC BOEING 707.  COMPREHENSIVE INSTRUCTIONS AND COMPETENT ENGINEERING PROVIDE AN EASY BUILD. 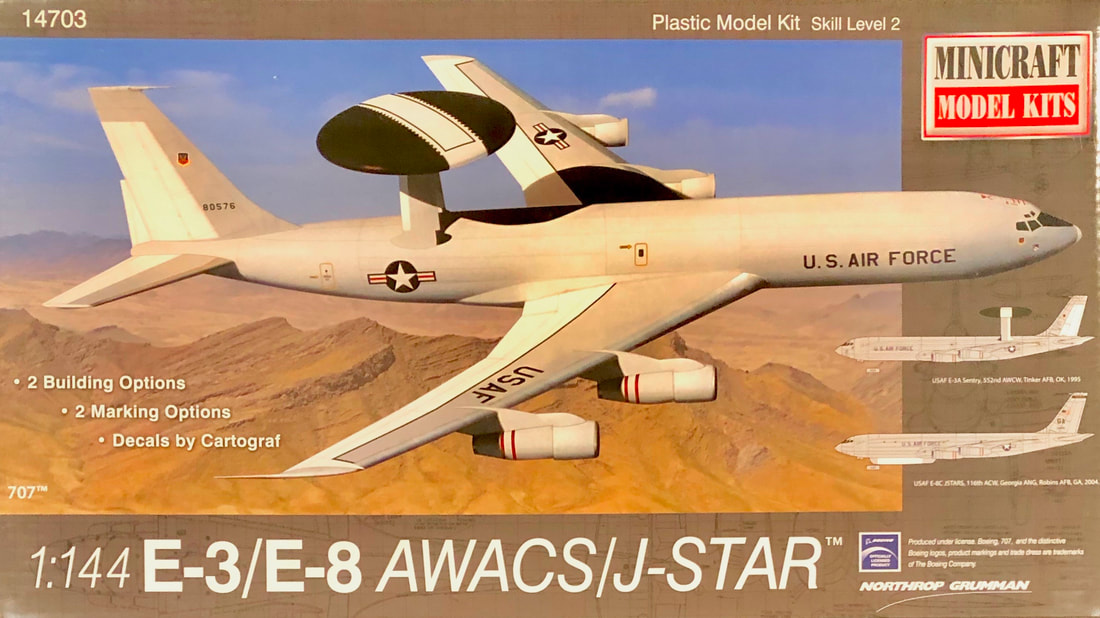 This model was previously released as two separate kits.  Now, you get a choice of either model in the same box.
Later on, the 707 was utilized for the E-8 Joint STARS.  Its mission is similar except its sensors are designed to detect and track ground vehicles in addition to some airborne targets.  The “joint” part of the mission includes onboard stations for U.S. Army personnel who would coordinate actions to appropriate ground forces based on detection of land-based threats. 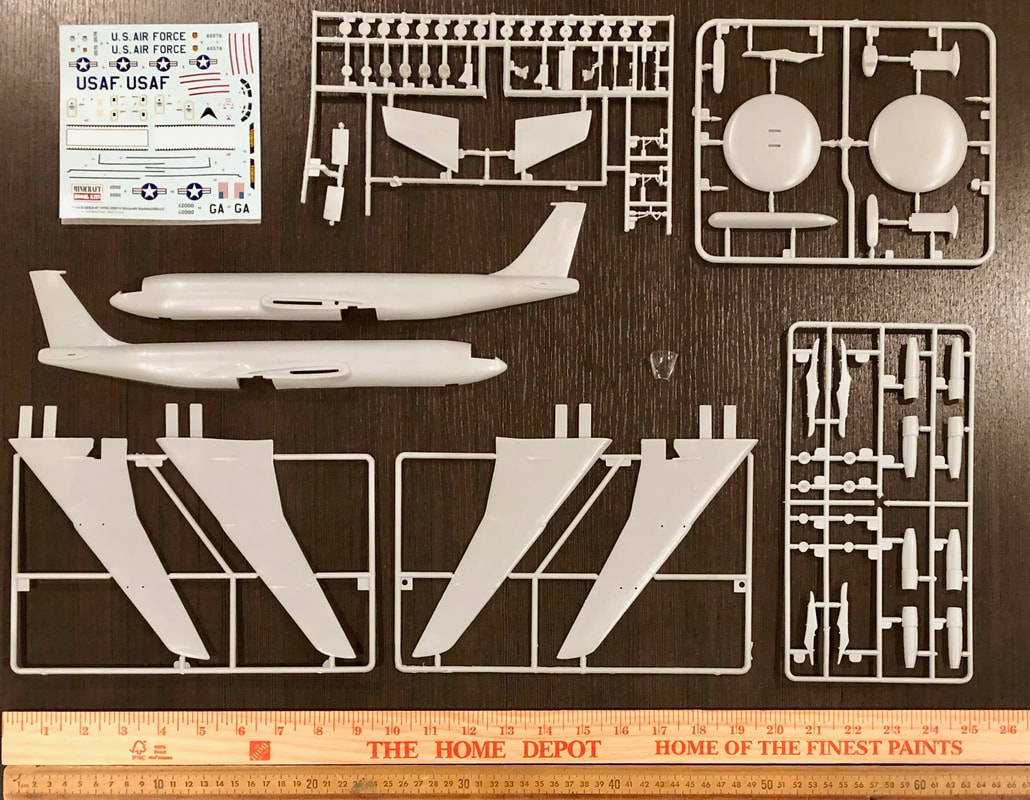 Minicraft's traditional Intercontinental 707 has a new sprue with the military bits.  Note that you have the option of a clear windscreen piece up front or you can use the provided window decal which will eliminate the need for masking the small windows.
Minicraft Models added a new set of parts to its Boeing 707 to create one kit that will allow the builder to choose between the AWACS or the J-Star.  Both Air Force planes are very cool and perhaps the biggest quandary the buyer will face is which model to build.  You’d better plan on buying two.
As always, Minicraft uses reinforced boxes for their kits.  They're practically bulletproof compared to the competition.  Plus, Minicraft individually bags their sprues which protects the parts from getting scratched during shipment.
The AWACS radome has an accurate cross-section.  It’s much better than the dome included with the early 1980’s Revell kit.  That radome is way too flat.  If there’s a trade-off, the Minicraft dome doesn’t spin like the Revell one did, but I’m willing to give up the “action feature” in trade for the accurately shaped radome engineered by Minicraft.  Also, Revell’s E-3 includes the older -120 domestic 707 which is too small in span and length and the Minicraft kit is much more accurate in that regard.

This is a styrene plastic model kit requiring paint and glue to assemble.  Modelers will be happiest if they have built at least a couple aircraft models using paint and glue before trying this kit.  No interior is provided; assembling, painting, and installing those four engines will probably be the most involved part of the building process.
Regarding a location guide, there are holes included on the insides of the fuselage halves to open up with a drill to receive pins on the AWACS radome masts and J-Stars canoe.  Getting the parts in the right place is a breeze. 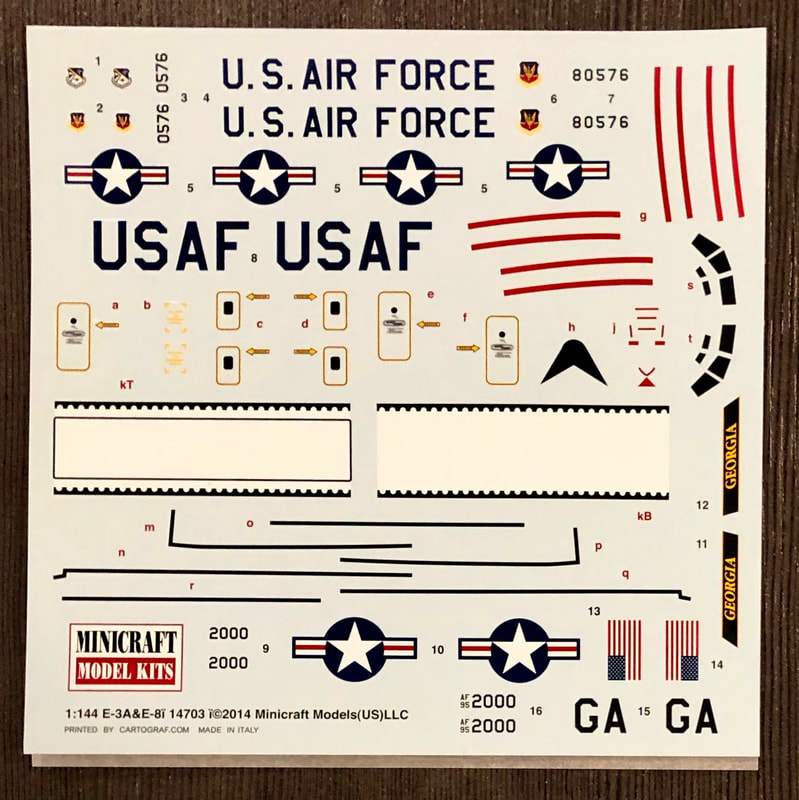 A big decal sheet has military markings, doors, and the AWACS dome stripes.  Cartograf decals have extremely fine print-resolution, colors are always in-register, and they go on well.  We'd guess you might want a little setting solution to get the dome markings to settle down but our experience with Minicraft's decals means they look like they've been painted on when the model is done.
The intercontinental passenger 707’s, at least the earlier ones, had three turbocompressor housings on engines 2, 3, and 4.  Later 707’s had four, so the AWACS and J-Stars had this configuration.  Minicraft’s 707 was originally tooled as an earlier version.  For the sake of accuracy, a new pylon with the long turbocompressor inlet was added to the radome sprue.  Instructions show the right part number; pay attention to part numbers during your build to be sure you use the correct turbocompressor version.  Add the older-style pylon to your spares box.  Some 707’s only had two turbocompressor housings; you could use that short pylon at the Engine #4 position if you decide to build one of those aircraft some time.

The box side has a spread of both markings options; you choose whether you'd like to build your model as the AWACS (left) or J-Stars (right).
Minicraft’s AWACS/J-Stars Fuselage halves fit perfectly with existing location pins.  Minicraft’s 707/E-3/E-8 has fine engraved lines with a stressed-skin appearance.  A little putty may be needed here and there but the model is a friendly build.
This is a nice model of a classic civilian transport that found an enduring niche as an important military aircraft.  Like the B-52, it soldiers on with several failed attempts to replace it.  Minicraft’s 1/144 E-3/E-8 AWACS/J-JSTAR is a great 2-in-1 kit that allows you to add two versions of this iconic military aircraft to your collection.

SPECIAL THANKS TO MINICRAFT MODELS FOR PROVIDING THIS MODEL KIT FOR US TO REVIEW.  CHECK OUT MINICRAFT.COM FOR MANY OTHER GREAT KITS!