Minicraft Models is known for creating kits of iconic subjects.  For example, no other manufacturer has a comprehensive line of military aircraft that have served for over half a century, but Minicraft provides an impressive assortment of kits including several variants of KC-135’s, C-130’s, and their famous B-52 kits, all in popular 1/144 Scale.
BY BILL ENGAR

MISSION BRIEFING:  MINICRAFT MODELS ADDS NEW PARTS TO A CLASSIC MODEL.  UNPRECEDENTED OPTIONS STILL ABOUND.  IT'S NOT JUST A KIT; IT'S NOW A PRODUCT LINE.  THIS IS A SMALL-SCALE "MODELING ESSENTIAL;" IF YOU HAVEN'T BUILT ONE YET, GIVE IT A TRY.  YOU WILL NOT BE DISAPPOINTED.

Nowhere else can you find a collection of B-52’s, from early examples to current-flying versions, in any scale.   Minicraft Models has created an entire line of B-52 models all in popular 1/144 scale.  Other B-52 kits have come and gone, but only Minicraft’s B-52 has been available continuously for three decades, proof of its ongoing popularity with modelers.  The success of their original “H” variant has spawned quite a few decal variations, and beginning in 2012, Minicraft added new parts for the modeler to create a B-52H depicting hardware developed for the current-flying versions. 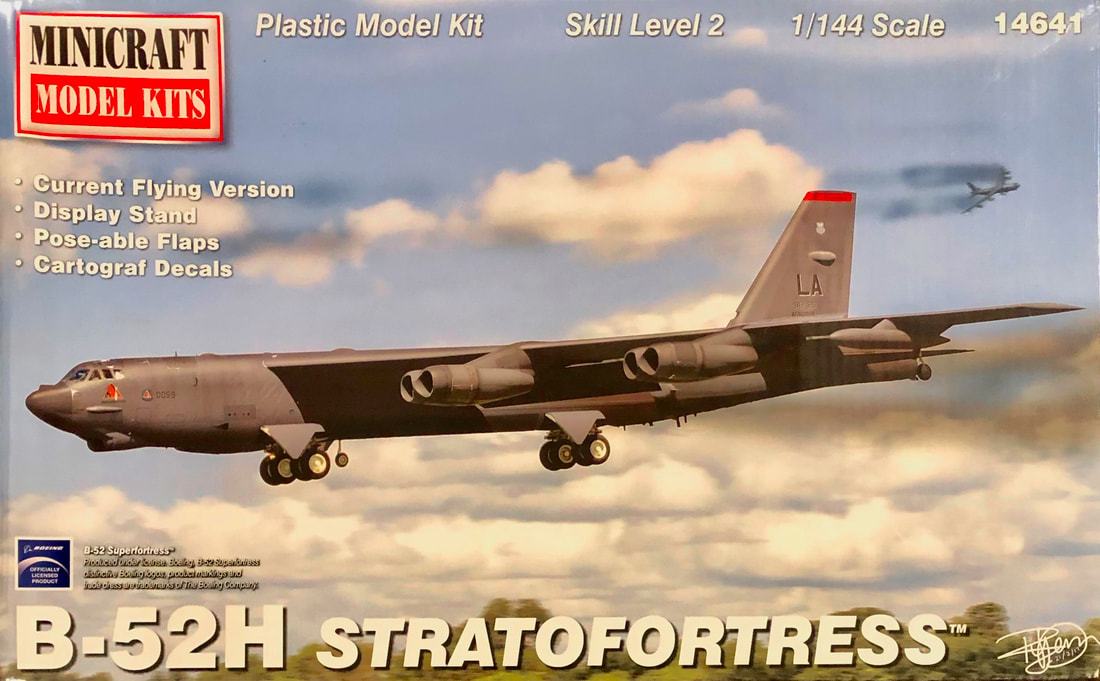 Minicraft's B-52H, #14641, shows a B-52H in Gunship Gray.  Box art by Ryan Dorling.
EVS (Electro-Optical Viewing System) pods give the late B-52H a distinctive look.  These twin chin-pods greatly facilitated the low-level penetration mission.  This became a standard attack profile for the B-52, which was originally designed as a high altitude strategic bomber.  Minicraft slightly retooled the existing B-52H’s horizontal tail sprue (Sprue “E”) to add accurate EVS pods as well as the suite of Electronic Countermeasures (ECM) pods and blisters found on modern incarnations of the B-52.  Eleven new parts were created to make a modern B-52H. 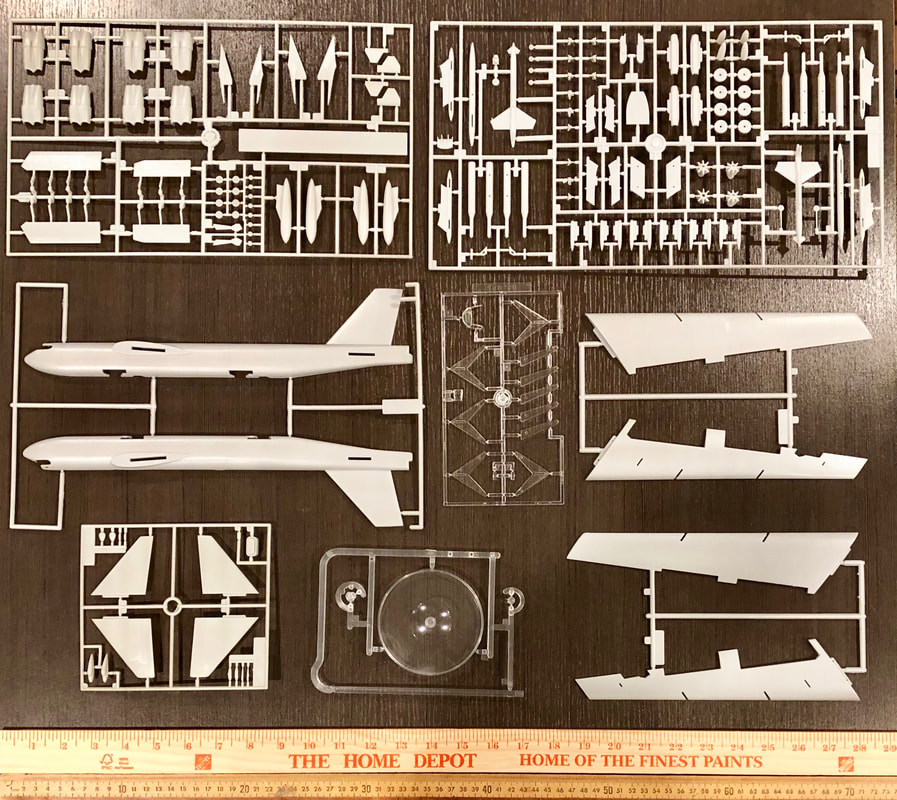 Seven sprues plus a Clear Minicraft Stand make up this model kit.
The fuselage tooling was modified with locator holes on the inside that are easily opened up by the modeler to accept the new external parts.  Instructions clearly show where these new parts should go in order to create an authentic model of a modern B-52.  Your choice of two decal schemes is included with both using FS 36118, Gunship Gray, depicting the B-52 as it appeared circa 2001.  Decals are made by Cartograf.
The magic of this kit is the addition of eleven new parts to previously empty corner space in the horizontal tail sprue ("Sprue E") that distinguish the modern B-52H.  EVS pods, ECM equipment, and the tail extension are depicted.
When this model was originally created, it was the most detailed 1/144-scale model available with more building options than any other kit in that scale at the time.  Even after several decades, this probably hasn’t changed; we can’t think of another 1/144 model kit that provides the options for display and weaponry that this one does.  For this reason, we’re proclaiming it one of the modeling hobby’s “Essentials;” one of those great kits that everybody who builds 1/144-scale models ought to try building at one time or another.  And with the many choices that Minicraft provides for the B-52, there is a B-52 kit that should satisfy any modeler.
The model was engineered with deployed flaps that would be encountered on a B-52 during takeoffs and landings.  You can cut off the actuators to display the flaps stowed if you wish.  The Clear Minicraft Stand is included if you wish to display your B-52 in flight.

Two choices for markings are represented on the decal sheet.  Both are overall Gunship Gray.
Landing gear can be displayed either deployed or stowed as well.  One nice thing about this model is that you won’t need any weight in the nose thanks to the bicycle-style configuration.  The wheel wells have depth, unlike many 1/144-scale kits.  Landing gear struts realistically depict the stubby truss-like structures that support the B-52 on the ground along with the wing outriggers.
The windshield is thin and transparent.  A rudimentary cockpit is included with a center console and seats, but there’s nothing to keep the modeler from adding an instrument panel and additional cockpit detail.
The following is a description of these weapons that can be displayed separately from your “Current Flying Version” B-52H Stratofortress.  If you would like to display these on a 1/144 B-52 model, we’d recommend Kit# 14615, a Cold War-era B-52H in a SAC (Strategic Air Command) scheme that would have actually carried these weapons.
Four GAM-87 Skybolt missiles are included.  The Skybolt was intended an air-launched ballistic missile that was cancelled as submarine-launched ballistic missiles were determined to be more effective.  Each Skybolt has four parts including the aerodynamic tail cone along with two Air Force insignias per missile.
The AGM-69 SRAM (Short Range Attack Missile) was a Boeing-built air-to-ground missile that carried a W-69 nuclear warhead (160-200 kiloton yield) intended to neutralize air defense missile sites.  It was to replace the Hound Dog missile.  Thanks to its much smaller size, six SRAM’s could be carried on the same B- 52 hardpoint as one Hound Dog and each could be programmed to hit its own separate target.  The instructions don’t suggest a display option, but you could build the missiles attached to the pylon and attach the pylon to one of the small, clear stands.
Of course if you decide not to build any of these missiles along with your B-52H, they can go in your spares box to use with myriad other projects!

As always, Minicraft’s B-52H has engraved panel lines that won’t disappear under a couple layers of primer and paint.  Parts fit is pretty good  and engineering was exceptional for the time meaning you won’t need a large amount of putty to fill gaps and seams; maybe a bit at the wing/pylon/engine joints.   Contest modelers might want to fill some ejector pin marks on the backside of the main landing gear tires, but this might be nitpicky even for a contest modeler as they will be hard to see when installed facing each other.  There are some ejector pin marks on the flaps and again, only contest modelers will probably worry about these.

This artwork from aviationgeekclub.com shows a Gunship Gray B-52H that resembles Minicraft's kit.  Note that this picture shows the "gun-delete option."
Considering the number of parts and options in this kit, it should be attempted by modelers who have had at least a little experience with a few glue-together aircraft models.  Instructions are good and any modeler who can apply glue and paint should enjoy the many choices that this kit offers.  This is perhaps the very best of the B-52 series for those modelers ready to try a larger kit with more parts such as this thanks to the simple, overall Gunship Gray paint scheme.  The modeler won’t have to deal with the extra prep needed to get a natural metal finish to look good.
ALSO AVAILABLE FROM MINICRAFT (sold separately):  #14734, B-52D/F, and #14745, B-52D/E represent the B-52 in its earlier, tall-tail incarnation thanks to some new tooling.  The D/F version was used in Viet Nam in a conventional bombing role and the D/E represents an early Cold War SAC nuclear bomber.  You can build an impressive collection of B-52's in 1/144 scale that depict the plane in its different guises throughout its history.

We love this model kit; both brother Dick and I have enjoyed building them.  With so many options and details, we recommend it as a “Modeling Essential;” one of those kits that anybody who builds small-scale aircraft ought to try sooner or later during their model building “career.”

We give Minicraft’s Current Flying Version B-52H Stratofortress a very enthusiastic four thumbs up.  We hope to see additional B-52 variants in this series!

Special thanks to Minicraft Models for providing this model kit for us to review and enjoy!