BUILT IN MY YOUTH; LANGUISHING IN A BOX FOR ALMOST 50 YEARS, FINALLY RESTORED

When I was a junior high-age kid, the XB-70 was hot!  It was my favorite aircraft at the time and the newspapers had articles about how it was breaking speed records and was the next big thing in 1965.  Of course I had to get models of it and as soon as Aurora came out with their box scale (1/105) version, I had to buy it.

Lindberg's "B-70" is easy to find at time of posting (we've included an Amazon link below with current pricing and availability).  This box uses the same artwork as the original 1964 release.  Kudos to Round2 for going the vintage route with this one; compare it to the original 1964 box that we've included below.
Of course Lindberg came out with their own smaller box scale model kit after Aurora, measured by me to be around 1/180 scale.  I bought that one later and had a smaller version for my display shelf.  I cannot remember whether or not I built it “in flight” or on landing gear but when I left home for a church mission a few years later, it was boxed up with all the rest of my models and preserved (in theory) for the future.
“The B-70 is a dual speed bomber.  One that can cruise at mach 0.9 (about 590 mph) and with the ability to reach speeds of over 1100 mph for a range of 1,000 miles.  The wing tips are angled downward at hypersonic speeds to increase lift.  The B-70 will ride on its own shock wave like a surfboard rides a wave.  Approximate speed is mach 3, approximate dimensions are length 185 feet, span 117 feet.  Range is transcontinental.”
The plane was requested by SAC Commanding General Curtis Le May in late 1954 as a replacement for the B-52 with the idea that the new plane could use existing runways and hangars.  The trick was to have an airplane with an operational un-refueled range of 6,000 nautical miles with “as high a speed as possible.”  Boeing and North American Aviation, Inc. were given Phase 1 design contracts.  North American won the first contract, but its main competition turned out to be the nuclear ballistic missiles.  Once the design was revealed, nicknames like Pterodactyl for the “flapping wingtips,” The Great White Bird for its beauty, The Thing for its very large size, Cecil for its resemblance to the TV Seasick Sea Serpent cartoon character, and properly, the Valkyrie, its accepted designation based on its decisive destructive potential in such a beautiful form.
The finished model in flight on a Clear Minicraft Stand.  These stands are inexpensive and the post can be cut to the desired length.  They're great to display most of your in-flight models!  Check them out on the Minicraft website.  You can order them directly, or get them at your local hobby shop.
Of course the ballooning price tag, ballistic intercontinental missles, developmental delays and the unfortunate crash of ship #2 during a photo shoot on June 8, 1966 were the death knell for the XB-70 as an operational bomber.  Several jets with GE engines were flying in close formation and excessive vortex created by the Valkyrie’s drooping wingtip sucked an excellent pilot Joe Walker’s F-104 into the XB-70 causing it to roll over the bomber’s two vertical tails and explode.  The loss of the tails caused the Valkyrie’s pilots to lose control and the aircraft spun down to impact on the Mojave Desert floor, killing pilot Carl Cross whose ejection system was not engaged probably due to his being knocked unconscious by the initial gyrations of the damaged aircraft.  From then on I hated the F-104!
I decided to use a Clear Minicraft stand for the plane and replaced the original “body button” on the bottom for use with the original Lindberg Stand with the Minicraft ball part which allows the model to be placed in various positions on the stand 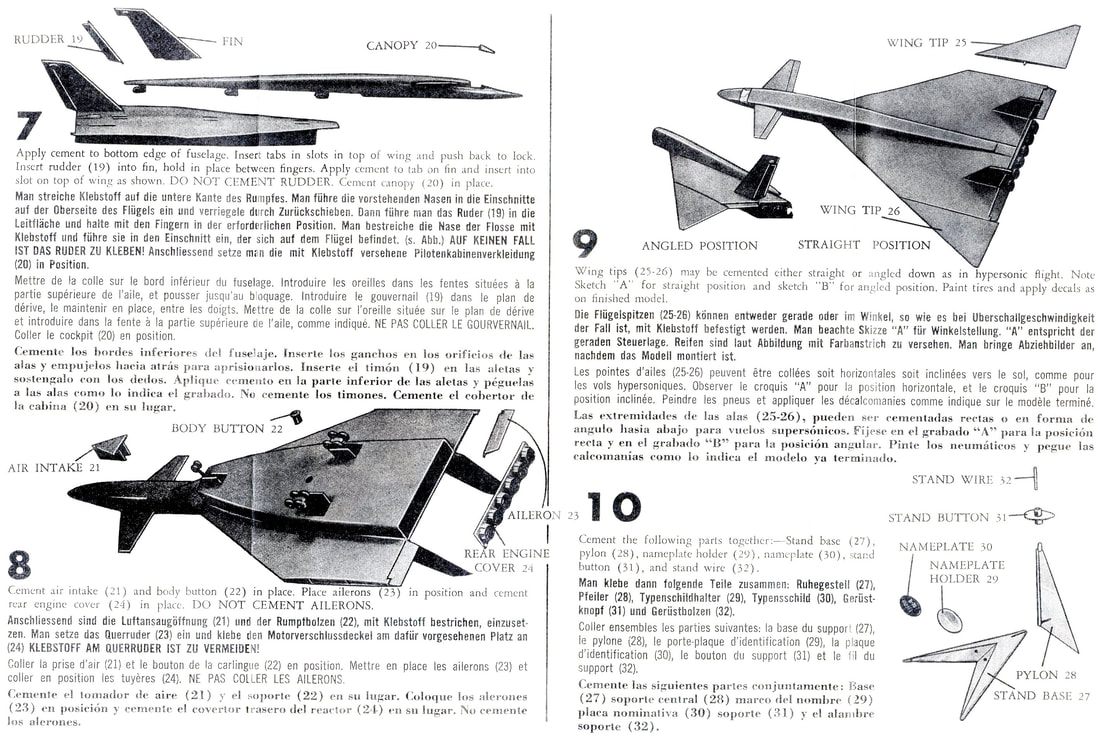 Pages 6-7 show final assembly.
I used IPMS show decals from 2005 and 2010 as they were exactly the right size for the wing and fuselage decals.  I used Micro Super Set and Super Sol to ensure good decal adaptation and sprayed the decals after they were set with a thin coat of Alclad II clear gloss.  Once that was all dry I finished the model with a couple of thin coats of Alclad II semi-gloss after I masked off the rear fuselage and engine exhausts.  They were weathered a little bit and then the finished airplane was snapped into its socket atop the Minicraft stand.  I scanned the North American Aviation label from the Pace book and used white Testor Decal paper to make a little label for the stand.  I underwent the same process with Micro Scale Set and Sol and Alclad II gloss clear coat to place and then “fix” the decal image on the stand.
The pictures show the finished result of the restoration of an old model originally built fifty years ago.  Is it good enough to win a contest?  Who cares!  People will enjoy seeing it in its white glory on the contest table anyway!
​BONUS MATERIAL

In our Dem Brudders model kit stash, we're fortunate to have a factory-fresh early release of the Lindberg B-70.  It's still sealed in the original plastic!

As it appeared originally, the B-70 was depicted in its Lindberg box art as an operational aircraft with a SAC banner behind the front canard.  The white paint worked well for the test program, but it had a more practical operational purpose.  Upon initial detonation of a thermonuclear blast, an intense flash in the visible and near-visible range (ultraviolet and infrared radiation) was expected to scorch the external surface of an escaping aircraft unless it had a white, reflective finish.  This is why aircraft such as the B-36 and early B-47's and B-52's had white undersides.  The B-70, had it become an operational bomber, was expected to have an overall white finish.

The retailers loved this 1964 guarantee.  Don't return a defective kit to the store, simply mail it back to Lindberg!  They'll provide a solution in only 6-8 weeks.
​
XB-70 REFERENCE PHOTOS
IMPROVE YOUR XB-70 MODEL -- NO MATTER THE KIT BRAND
In 2016, the National Museum of the United States Air Force in Dayton, OH completed a fourth gigantic display hangar that now houses the museum's extensive collection of historic presidential aircraft and test planes.  For many years, the XB-70 was housed in a crowded annex hangar accessible via bus-tour with limited time to enjoy the aircraft housed there.  Today, you can enjoy them at your leisure in a spacious, state-of-the-art display space.  John W volunteers at the museum and provided us with the following photos.  Our previous visit to the museum was just before the new hangar opened; we can't wait to get back there to see the much-improved display space!

Two XB-70's were built; as mentioned, the #2 airplane was lost in an unfortunate incident unrelated to testing.  The #1 aircraft (AV-1 /62-0001) sat outside for many years on display, but fortunately, it was moved indoors decades ago as the museum expanded.  In 2016, the aircraft was moved into the new hangar where it is much easier to view and photograph.  All photos taken by John W. 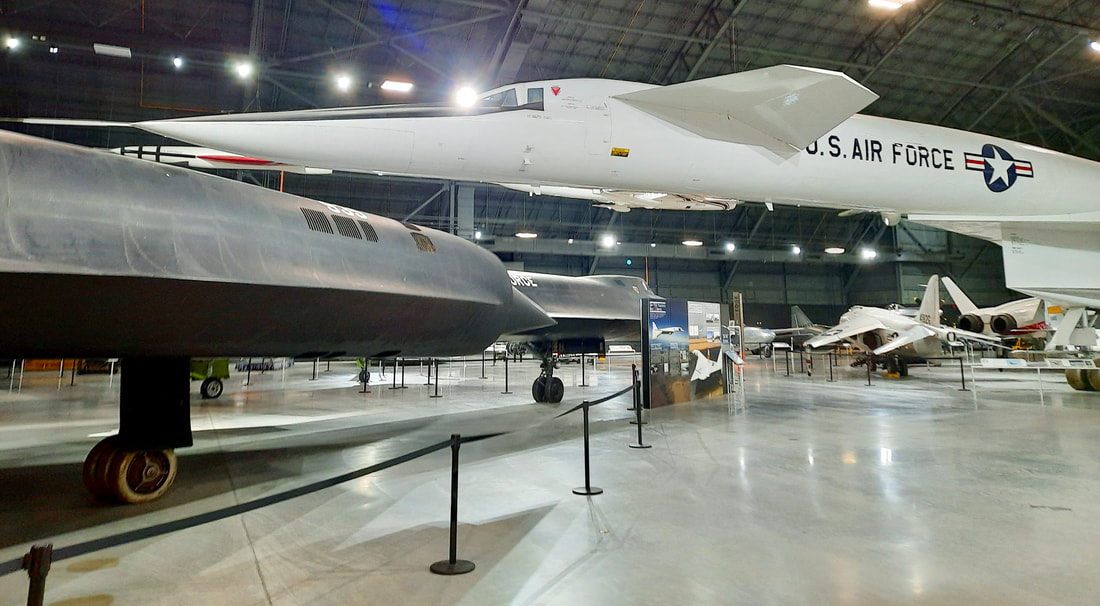 No doubt the B-70 was tricky to taxi with the cockpit about 20 feet or so off the ground and the forward landing gear about 70 feet or so behind the pilot.  The XB-70 dwarfs the SR-71.
A closer look at the engine six-pack reveals detail for the movable "turkey feathers" that provide an adjustable outlet for the YJ-93's.  These allow a larger exhaust opening to optimize engine thrust while afterburning is engaged.  The grid pattern on the underside of the aircraft's top fuselage surface is depicted in the 1/72 AMT version of the XB-70.
SPECIAL THANKS TO JOHN W FOR PROVIDING THESE PHOTOS!!!
Scroll down just a bit to see what else is new at DemBrudders.com!