Join Dem Brudders Dick and Bill as they provide coverage of an awesome model show in the Gem State!
BILL:  We looked forward to the third edition of Boise Mad Dog Modelers’ bi-annual Fall Show on Sept 28, 2019.  Our history with the Boise Mad Dog Modelers goes way back to our old Gathering days in the late 1990’s.  We got to know them when they began coming to our local show in Ogden, UT that was dubbed, “The Gathering.”  The Gathering meant cooperation between IPMS/SLC, NUSMA, based in Northern Utah, and UMAG, the Salt Lake City-based Utah Miniature Automotive Guild.  Three clubs cooperated to execute a memorable annual model contest.

A fish's eye view of the IPMS Boise Mad Dog Modelers Fall Show, September 28, 2019.  Vendors at rear sold irresistible treasures.  The registration desk is to the right.  In the foreground, Brudder Dick does his best Slender Man imitation.
The Gathering soon expanded beyond that definition when well over a hundred modelers from many western states and Canada participated, and a number of modelers from Idaho, Colorado, and New Mexico became instrumental in helping us with judging, registration, and photography.  The Gathering was a venue for several IPMS/USA Region X contests and we couldn’t have done it without help from our Region VII friends in Idaho.
Starting in 2015, the Boise Mad Dog Modelers decided to host their own model show every other year, and Dick and I attended in 2015 and 2017, having a great time.  For 2019, we knew it would be an event not to be missed.
DICK:  Dem Brudders have thoroughly enjoyed our participation in the three bi-annual IPMS/Boise shows we have attended since they started presenting them in 2015.

Club President Arlen Marshall has been able to arrange for his Foothills Christian Church building to be used as the venue and it has been great.

Vice President Brian Geiger has been coming to the Gathering and IPMS/Salt Lake City and Shocon events since who knows when and has been one of the masterminds of the Boise show.
Treasurer Herb Arnold has very capably handled registration and taken our entry fees and the other officers, Konstantin Rickford and Kent Eckhart have helped as Judges.  Their 25-30 club members have also helped in various ways and the quality of the models on the contest tables have rivaled what we have seen at IPMS Nationals.
Bill:  No conversation about the Boise Mad Dog Modelers is complete without mentioning Bill Miller, the assumed mascot/namesake of the club.  I got to know Bill Miller starting in about 1990.  Bill was an institution in the hobby section at Ralph’s Toy and Hobby, an iconic retailer in Western Boise.  I was the customer and Bill was the hobby expert.  In addition to his remarkable knowledge of anything Plastic Modeling, I witnessed firsthand his sharing a deep well of information on such things as model trains and pinewood derby cars with other customers
In 2019 they had 9 classes of models, including Juniors, and 46 categories.  Dem Brudders certainly helped inflate their numbers, Soviet Statistics style, as Dick alone had 34 entries which meant 38 models since one entry was a collection of five Teenage MiGs.

USS Baltimore CA-58 in 1/350 Scale by Rodney Mead.  We liked the well-done camo scheme.
We arrived just after 8 am as they were setting up, which gave us plenty of time to haul our numerous boxes into the cavernous Foothills Christian Church gym and once the tables were set up with category signs, we spent a while putting our models on the table.  After a tasty lunch at nearby Freddy’s Steakburgers, we came back to the venue and I had time to mill about the contest room and pick my favorites from the various classes of models.
BILL:  A healthy number of models showed up at the Boise Mad Dog Modelers Fall Show.  One of my favorite things at model contests are the unexpected and unique entries that sometimes show up.  I’ve never seen a model that enters the room by itself and strides up to its display space, but that’s exactly what Bob Jacobsen’s full-size R2-D2 did!
Bob spent eight years building his amazing R2-D2.  You really couldn’t call it a model since it was full-size and fully operational.  As mentioned previously, Bob rigged it for RC, so it was he who “drove” the robot into the contest and up to the table.  It had working lights and sounds.
Bob has had his R2-D2 finished for a couple years or so now and it has been popular at other events, including those where various Star Wars cast members have been present.  The inside back panel has the signatures of the likes of Carrie Fisher, Kenny Baker, Anthony Daniels, Peter Mayhew, Billy Dee Williams, and Jeremy Bulloch.  Bob’s R2 appeared at the unveiling of one of ANA’s (All Nippon Airways) Star Wars jets.  Bob said he has enjoyed getting to know Anthony Daniels, who he’s met at several events.  I’ve heard a few people say that he’s a very personable guy and Bob confirmed this.
DICK:  Time for the Awards Ceremony!  We mentioned Kevin Rigby as the Winner of the Dem Brudders Favorite/Best Aircraft Award.  Dem Brudders were also happy to be the recipients of some special awards.  The Mad Dog medallions were also striking awards for first, second and third award winners.
The Judges Grand Award, sponsored by IPMS/Salt Lake City was well deserved with a fantastic ship model built by Konstantin Rickford.  I was glad to be there as President of IPMS Salt Lake City to personally present the award and congratulate a well deserving winner! 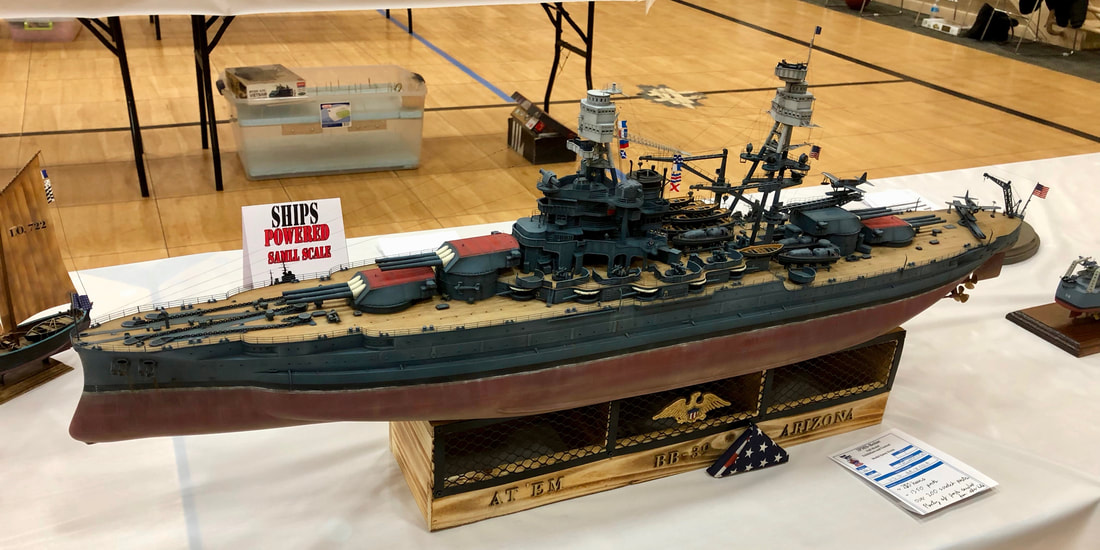 Konstantin Rickford's USS Arizona, built from Trumpter's 1/200 kit.  Konstantin raided other ship kits for parts, but that wasn't enough.  Over 200 parts are scratchbuilt!
We were practically the last to leave the hall.   When you enter a lot of models, it takes some time to “get your dogs off the field” as I like to say.  This is my own parody of a nasty little league football coach who yelled that comment at my son’s hapless team after they suffered a blowout-loss many moons ago, but then that coach had to go home.  And so did we, after having a wonderful time with some great modelers in Boise.  Congratulations to Arlen, Brian, Mad Dog and their whole gang!
Bonus Gallery:  More models from the show!