REVELL OF GERMANY REINTERPRETS AN OLD CLASSIC IN 1/72 SCALE

Revell belatedly released their all-new Elco Patrol Torpedo Boat #05147, specifically in PT-109 guise.  This kit was in the pipeline to be released in late 2018, but the implosion of Hobbico, then parent company of Revell, destroyed Revell USA.

MISSION SUMMARY:  This isn't your dad's Revell PT-109.  Revell struck a balance, producing a reasonably priced model with room for detailers to do their thing.  It's much-improved over their beloved classic.

The remains of Revell USA were brought under the same roof as Revell of Germany.  It took some time for the new-kit pipeline to start producing again, and the new 1/72 PT 109 Patrol Torpedo Boat kit has begun to appear on hobby shop shelves in a black Revell Germany-style box.
The hull is molded in five parts not including the deck.  Four deck torpedo tubes are included.  Detailing on these is much better than that on the 1963 version.  Cages for the gun mounts have the lower shrouds molded in.  The older kit had the cages open. 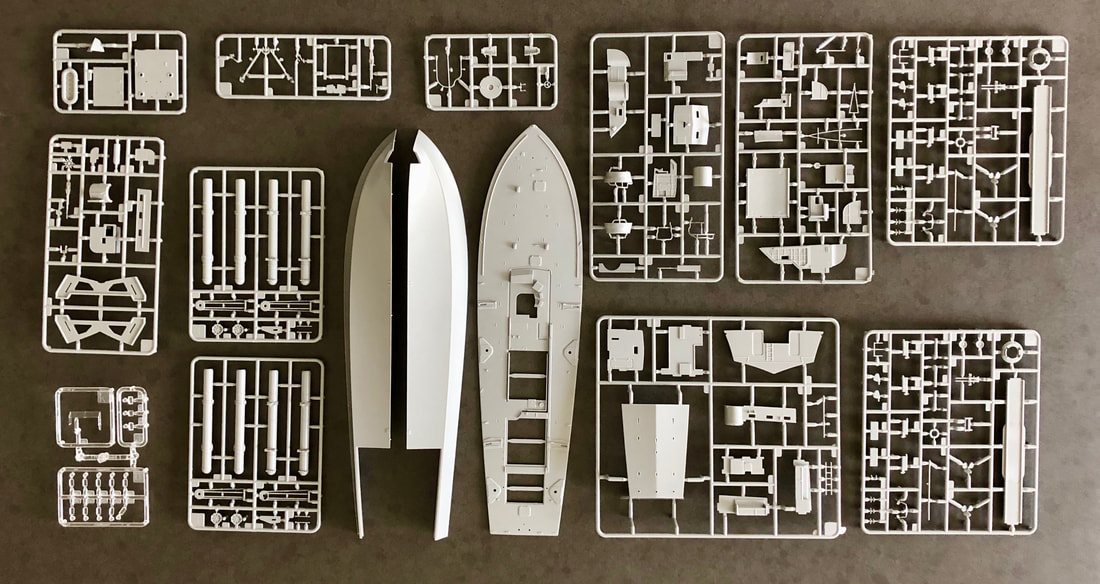 Parts layout differs substantially from the classic 1/72 Revell Elco PT Boat of 1963.  This is a completely new kit!
Parts are included to build the PT-109 as it was configured just prior to its sinking.  Specifically, this means that a 37mm anti-tank gun is included that can be attached to the forward deck as if lashed in temporary fashion.  Recall that Kennedy commanded PT-109 for some months prior to the addition of the gun, and a two-man raft would normally have been lashed to the center of the foredeck (as portrayed on Revell’s classic PT-109).  The gun was added just one day prior to the final mission, which resulted in the destruction of PT-109.
One area of enhanced detail is the muffler bypass hardware.  On the old kit, the linkages consisted of raised lines on the hull transom; the new kit has separately molded linkages and a much better depiction of the butterfly valves (molded in the open “mufflers bypassed” position).

The foredeck railing is molded into the hull as it was for the vintage Revell kit.  Another addition to the kit are some bulkheads and parts to depict interior portions.  The original Revell PT-109 kit had no clear parts.  A solid piece that was supposed to be a windshield was included in that kit.   The new kit has a clear windshield and several small, clear windows.  The many skylights are molded into the hull, but they are not clear pieces.
Kudos to Revell for reinventing an old classic!  Some may be disappointed that the kit is not super-detailed, but the new parts are a vast improvement over what we lived with for over 55 years.   The price isn’t a whole lot more than the old kit, which still happens to be available!  So we’re very happy to have a new PT-109.  And hopefully, one of these days, Revell will release an all-new 1/72 Higgins PT Boat!

Dem Brudders give this new classic four enthusiastic thumbs up!  We’re very happy that Revell is back and producing new kits again!

Depth charges, the 37mm gun, and green paint were late additions to PT-109 according to most historians.  Modelers who wished to portray the older Revell kit like this had to scratchbuild or scavenge the forward deck gun and depth charges.  One of the best virtues of this kit is that Revell incorporated these features.  However, Revell includes the Carley raft for those modelers who wish to include it on the fore-deck.  It was an ironic twist of fate that the Carley float was deleted for the improvised-mount deck gun just prior to the sinking of PT-109.  While most of Kennedy's crew survived the sinking and eventually swam to a nearby island, no doubt their ordeal would have been easier had the Carley float been available after PT-109 was destroyed.

We're Amazon Affiliates.  Amazon.com provides us with a small commission if you decide to purchase one of these kits after going to Amazon through these links thanks to our status as Amazon Associates.  This program helps the website at no extra cost to you!
BONUS INFORMATION:

You can see two PT boats, an Elco (subject of the kit) and a Higgins PT boat at Battleship Cove, in Fall River, MA.  Closer to Providence, Rhode Island than Boston, Battleship Cove has as its main attraction the USS Massachusetts, BB-59, a 1930’s South Dakota Class battleship.  You can tour the topside decks and many areas inside of this ship.  A Gearing-Class destroyer and Balao-Class submarine can also be toured as part of the complex.  If you're a ship modeler to any degree, you'll have an enjoyable day (or more!) if you visit.
A hangar-style indoor display houses the Elco PT boat (PT-617) and Higgins PT boat (PT-796).  It’s the only place you can see both PT boats at once.

PT 617 was built too late to serve in WWII.  She was surplused in 1947 and used for various purposes until being purchased as a museum ship in 1979, finally going on display in 1985 after restoration.  Being built late in the war, she has many differences from PT-109 including a radar installation and different gun mounts.
Unfortunately, I was not able to tour inside the boat.  Windows were cut out of the hull, providing views of various interior parts of the ship.  As I recall, the inner bulkheads of the boat were painted white.  No doubt this was done to take full advantage of limited lighting available.  Topside, there were a number of small, three-panel skylights in the deck to allow illumination of the boat by natural light during the day.  I don’t recall seeing as many on PT 617 as there are on Revell’s PT-109.
Another interesting aspect of the restoration is that the linkages for the muffler bypass butterfly valves were simply missing.  No doubt, those 12-cylinder Packard engines had to be very loud with open exhaust pipes.  On approach and during missions, the boat drivers would have closed these butterfly valves, putting the engine exhaust through the six mufflers and into the water, which would absorb some of the noise.  During high-speed pursuits or escapes, the valves would all be opened to greatly reduce exhaust backpressure.  With such short exhaust pipes, and three engines putting out at least 3600 horsepower total, there would have been quite a bit of noise out the back end at full-throttle.  To put that in perspective, an average diesel locomotive has about 3000 horsepower, and those are thoroughly muffled.


SCROLL DOWN JUST A BIT TO SEE WHAT ELSE IS NEW AT DEMBRUDDERS.COM!  ADD US TO YOUR FAVORITES; WE HAVE NEW STUFF ALL THE TIME.