Atlantis Models’ first monster kit was Phantom of the Opera!  It comes from original Aurora tooling.
​
ON TONIGHT'S PLAYBILL:  ATLANTIS MODELS RELEASES TWO PHANTOM OF THE OPERA MODEL KITS IN 2020.  BOTH KITS IMPROVE ON PREVIOUS VERSIONS OF THIS CLASSIC AURORA FIGURE MODEL.  COLLECTORS AND BUILDERS ALIKE WILL BE HAPPY.  IF YOU CAN'T DECIDE WHICH ONE TO GET, BUY BOTH--WHILE YOU STILL CAN.
Two versions of Phantom were produced by Atlantis!  You’ll want to get both! 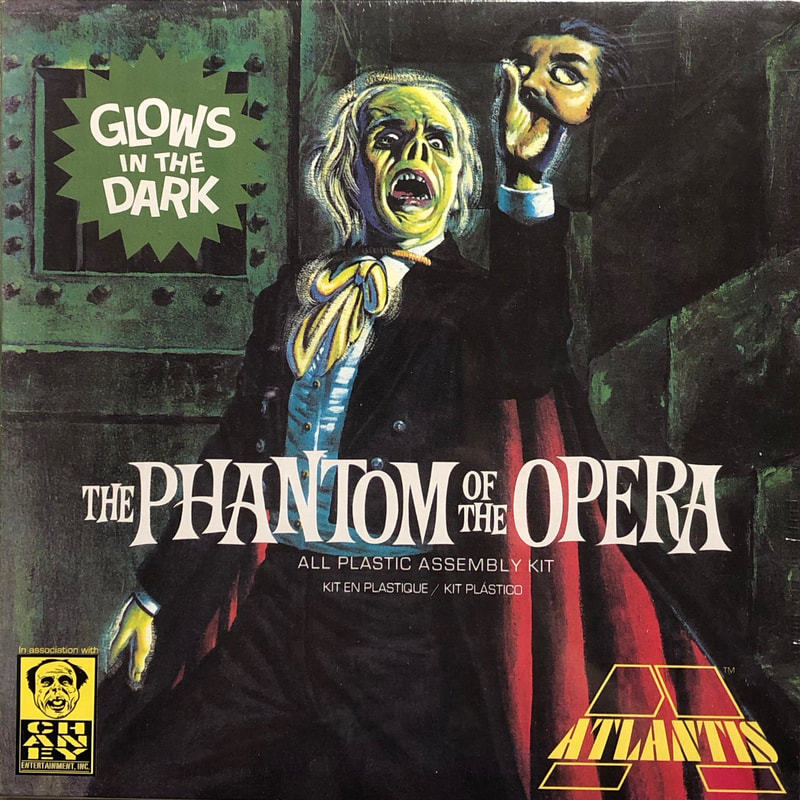 For the first time since about 1970, Phantom of the Opera returns in a square box - with glow-in-the-dark parts!  The new Atlantis logo and Lon Chaney emblem distinguish this release.  The hideous Phantom never looked so good!
Stories like Nosferatu, Jekyl and Hyde, and Hunchback of Notre Dame received film adaptations in the early 20th Century, but Phantom of the Opera (1925) with Lon Chaney was truly a landmark film in the genre, and it is this film adaptation that is referenced by the Phantom of the Opera model kit.  Stay tuned for our bonus features as we elaborate.
Atlantis’ current version of Phantom comes in an attractive square box.  While the original 1963 version of Phantom was a popular kit, sales of the Aurora Monsters model kit line softened as the 1960’s drew to a close.  In an effort to revitalize sales, Aurora decided to include a sprue of glow-in-the-dark parts with the kit.  There was some confusion among purchasers as to which kit had the new glow parts or not, and it was decided to package the kits with glow-parts in square boxes by the early 1970’s so that modelers had no doubt as to what they were getting.

TWO HEADS ARE BETTER THAN ONE:  The plastic contents of the kit.  Glow-sprue on the left.  Note that all parts from the regular kit are there as well--the glow-parts are duplicates of original kit parts!
Kit parts molded in gray styrene plastic.  An extra sprue of glow-parts is included.  Aurora apparently took masters for the original parts and made a new mold with a few key parts on a different sprue that would make a creepy glowing display when substituted for the regular gray parts.  The regular non-glow parts are still included; in fact, the standard non-glow kit is still there in its original form.  All the glow-parts are duplicates of those original parts—so you essentially get two sets of those kit pieces.
Perhaps the single item that makes the Phantom kit stand out is the sculpting on the face.  Overall, it is extremely well-done.  Things like skin textures, wrinkles, and tortured expression were executed flawlessly by Aurora Models over a half-century ago.  The mouth and teeth were particularly well orchestrated, and with a little paint and weathering, your model will make a striking display on your shelf!
The face is not the only thing that makes it an iconic vintage horror figure kit.  Aurora Models gave their 1/8-scale Phantom a perfect, dramatic pose.  Even if you haven’t seen the movie, you know that Phantom has just revealed his hideous face after ripping off his mask, which is held high in the air!  Even though frozen in eternity, the figure’s body language conveys his tortured soul and helps bring it to "life."  Phantom’s floppy bow suggests that he lives in another era, and the cape reveals subtly that he either has dark powers or maestro talents!
In addition to the hewn block “dungeon,” there is a rocky base that will be fun to weather.  If this wasn’t enough, a very nice rat and lizard reveal the squalid conditions in which The Phantom lives—yup, he resides in the sewer!  You never knew such a world could exist below an opera house, but Atlantis Models’ Phantom kit will make you believe it.
Phantom’s face, hands, and floppy bowtie glow in the dark if you expose the plastic to room light for a couple minutes or so and then turn the lights out.  A few parts on the base glow as well.  The unfortunate victim in Phantom’s cellar-dungeon also glows.  He might be the reason your mother wouldn’t let you have this kit originally.  Order one up today without telling her.  The rat and lizard glow as well!
As mentioned previously, Atlantis had a previous release of this kit in a long-box version that has sold out on their website.  At time of review, it can still be found at hobby outlets.
STAY TUNED - WE'LL POST SOME ADDITIONAL BONUS FEATURES ABOUT PHANTOM OF THE OPERA AND BOTH ATLANTIS PHANTOM KITS!

Scroll down just a bit to see what else is going on at DemBrudders.com.  We've got all kinds of crazy stuff here that you'll enjoy!