Join us as we take a look at the new Atlantis P-3 kit, and enjoy some photos of the evolution of the model from its previous incarnation as the now-rare L-188 Electra Airliner kit!
FINAL REPORT:  ATLANTIS MODELS IMPROVES ANOTHER CLASSIC.  WHILE IT MAY NEED SOME MINOR CLEANUP, WE'RE VERY HAPPY TO SEE THIS ONE RETURN AND YOU WILL BE HAPPY TOO!

This was originally a Revell kit, released in 1965.  To produce the P-3, Revell permanently modified tooling from a previous kit, their Lockheed Electra airliner, which originally debuted in 1958.  After the review, we’ll take a close look at this interesting detour of Revell model kit history.  Some kit collectors were frustrated with Revell’s decision to irreparably modify the Electra molds.  Revell can hardly be blamed for their decision at the time and we’ll explore that.
Two decal schemes are included.  The boxtop scheme portrays an early P-3A with a white top/gray bottom and Atlantis offers a view of a built model with these decals on the bottom of the box.  In 1984, Revell re-released the P-3 with Project Magnet decals, and Atlantis has provided markings for that version as well, giving you a choice.  Both versions are pretty cool and make a compelling case for wanting two kits, and at only $21.99 MSRP, your pocketbook won’t mind splurging for a pair. 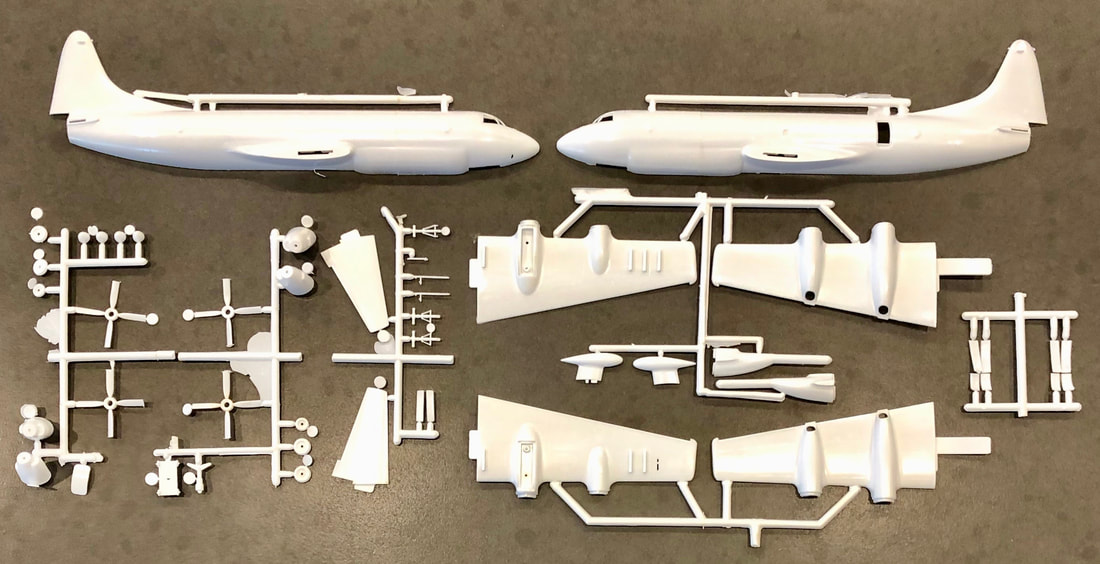 50 parts molded in white, just like the previous Revell release of the kit in 1984.
The kit has landing gear that can be posed up or down.  Kit parts have fine, raised details and engraved lines for control surfaces.

One interesting aspect of the kit is that part numbers comprise little round disks attached to many parts.  It appears that they double as ejector pins, so this might be responsible for fewer ejector pin marks on the parts.  Attachment points on these circle-things are thin so they will probably fall off before you take them off.  Breakdown of the kit is simple, so it’s not like you’ll be in a bind if they all fall off.
There is a small amount of flash on the parts, probably less than you’d expect to see in a vintage kit such as this.  Parts cleanup should be minimal.
I could find a few minor sinkholes that should be easy to fix or ignore.  The Atlantis version has fewer sinkholes than my vintage Revell kit.  Either Atlantis uses better technology/temperature regulation with the plastic molding process than Revell circa 1960’s which reduces shrinkage and sink marks, or properties of their selected plastic formula reduce this sometimes undesirable phenomenon.  Regardless, it’s the second comparison we’ve been able to do where Atlantis has produced a better quality product than the original releases.
The fuselage has some ejection pin rounds at the center seam join-surface which should be shaved off to assure a good fit at that major joint.  Scraping or sanding them down should be easy to get a tight joint with no gaps.
The modeler will notice what looks like a mold part line ahead of the wing on each fuselage half.  When Revell made this kit originally, they simply chopped up their L-188 Electra airliner mold, shortening the fuselage in front of the wing to the P-3 configuration.  The red prop-warning stripe decal actually goes pretty close if not right on that parting line, so that might be an easy solution to hiding the minor ridge that shows up from the tooling modification!  Be patient; upcoming are side-by-side pictures illustrating how the P-3 kit evolved since we also have a vintage Revell Electra kit in our archive!
There were quite a few differences between the L-188 Electra and the P-3 Orion and Revell went to efforts to portray the P-3 characteristics.  Stay after the review and we’ll discuss them too.

This box-side has model stats and a multilingual history.  Paint color chart at the right.

This box side lets you see what the decals look like before buying the kit!  Specs and measurements of the actual plane are included.
With no clear parts, one recommendation is to fill in the window openings with Testors Clear Parts Cement and Window Maker.  A rather silly looking cart-thing is included to rest the plane’s back end on display so it won’t sit on its tail.  Put some weight in the nose prior to closing up the fuselage so the model won’t be a tail-sitter without the cart-thing.  Don't forget to paint the insides of the fuselage black while you're at it and those cockpit windows will look a lot more realistic whether you decide to add some sort of "glass" or not.
Another minor bugaboo centers around the landing gear struts.  Posts for the wheels have raised bullet-things to hold the wheels on after they are snapped in place.  The completed model might have rolling wheels, but the raised bullet-things aren’t especially accurate and the wheels might be a little loose and crooked-looking to an anal contest builder (wouldn’t know where there’d be any of those around here).  This is another case where I’d recommend cutting off the post at the bullet-thingies and then gluing the wheels to the posts.  Perhaps a modeler trying to portray the vintage vibe of the original kit isn’t going to care about this at all, and that’s fine.  Just sayin’.
There's a picture of the searchlight pod below to use as a guide.  Scratchbuild a parabolic searchlight reflector to go inside, and you’ll wow all your modeler-friends.

One item betraying Revell’s desire to get as basic as they could with the P-3 release was the decision to machine in some underwing ordnance pods, but no effort was made to portray any ordnance besides the spotlight pod.
​Whether or not you remember previous versions of the Atlantis P-3A as the Revell kit from the 1960’s, 70’s, or 80’s, you’ll enjoy this kit.  Whether you want a nice quick build or a contest model, there is something for everyone here and at Atlantis prices, you just can’t go wrong.  Dem Brudders give this one four enthusiastic thumbs up!
​
​BONUS MATERIAL

REVELL’S ECLECTIC COLLECTOR ELECTRA KIT:  HISTORY WAS NOT ON ITS SIDE

The late 1950’s was an exciting time for aircraft development.  Technology brought the prospect of economical long-distance travel to the masses in a way it had never done.  Prior to this period, trains and ships were the preferred way to travel long distances, but the economy and reliability of the jet engine changed all that.

Post-WWII, Lockheed Aircraft had a strong performer in its beautiful Constellation airliner.  In late 1957, a successor, the innovative Lockheed L188 Electra, first took flight.  Superior performance was promising.  Just after the Electra debuted, Revell Models released a model kit of it.  Jack Leynnwood’s box art was spectacular with a polished American Airlines Electra taxiing in a rainstorm.
Apparently, Revell eventually decided the Electra kit lacked any further marketing potential thanks to this unfortunate occurrence.  As early as 1961, faster medium and small jets were competing for marketing territory formerly the domain of the Electra, and Lockheed ceased production of the airliner after building only 170 units.  The vibration issues were fixed, but the damage to the Electra’s reputation was irreparable. 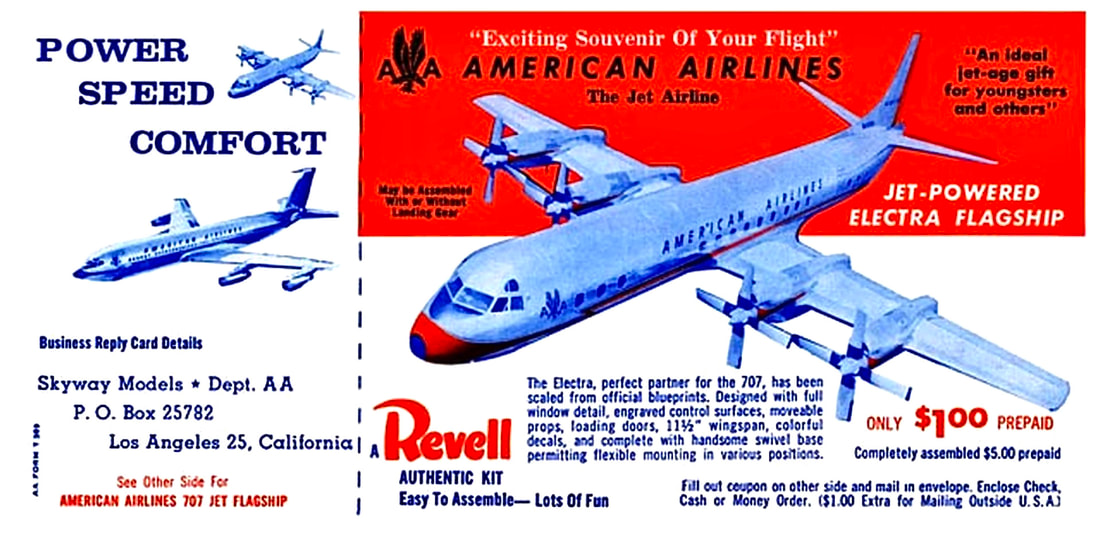 Flying was something special--well over half a century ago.  Today's "Exciting Souvenirs" when flying consist of overcrowded airports, completely full flights, disappearing leg room, and cattle-like treatment by airlines.  Back in the late 1950's, you could send a dollar to Skyway Models and get a Revell Electra model kit.  That same kit, unbuilt in a pristine box, may be worth hundreds of dollars today.
By this time, jet airliner models were relatively hot properties with young modelers.  Many youth were taking their first flights in passenger jet aircraft, and prop planes, even turboprops, were seen as passé.
The P-3 had a shorter fuselage, and this is why the fuselage mold was cut and spliced.  Engraved windows had to come off, so those raised squares on the tooling were shaved off, which brought the window indentations in the plastic up to the level of the fuselage--more or less.  Getting this right in the cavity of the mold was probably a challenge, which is a reason remnants of the old windows can still be detected.  Each fuselage half got a new pair of bubble-windows.  The P-3 utilized a bigger radome than the Electra, and the nose housing for that was extended.  The cockpit windows have a different shape in the P-3 and Revell caught this modification very well.
The aforementioned belly bulge was added, a loop antenna was added to the tail, and the tail section was cut so that the MAD boom could be added.  That part and the spotlight comprise the new parts that needed to be tooled.
Wing pylons for ordnance and countermeasure weaponry were cut, and the hole for the searchlight pylon was also added to the lower wing.  Wingtip extensions were added.  Horizontal tail surfaces were modified to fit the MAD boom extension, and tabs were added.
Don't mourn the loss of the Revell 1/115-scale Electra kit.  You can build an Electra in 1/144 scale from the Minicraft kit, pictured above.
The P-3 Orion turned out to be a very successful airplane, serving in its capacity for over half a century.  Production went until 1990!  Other roles for the platform included electronic intelligence (in the form of the EP-3E) and it has been utilized as a successful fire-bomber and weather research platform with the NOAA to research hurricane science.
MORE ABOUT PROJECT MAGNET

Project Magnet was a joint project between the U. S. Navy and Naval Oceanographic Office to accurately map variations in Earth’s magnetic field to aid in navigation.  The program was active from 1953 to 1994.  The first Project Magnet P-3A model kit was released by Revell in 1984.  That release was molded in white to provide easy paint coverage for those modelers who wished to use white paint over the bare plastic.  Atlantis’ release continues this.  Even if one decides not to build the Project Magnet aircraft, the white plastic will make it easier to paint the white-top of the operational Navy version.
Another “Project Magnet” was done in Canada from 1950-1954 via resources of Transport Canada.  This version intended to research magnetic fields given off by UFO’s.  This Canadian project often gets confused with or associated with the US Navy version since the name is the same and their timeframes somewhat coincide.  We’ll let the reader decide to what extent these programs are actually associated with each other.  Minicraft Models released their Lockheed Constellation kit in the distinctive orange-and-white scheme as well.  This NC-121K kit even has a small picture of a UFO!
SCROLL ON DOWN JUST A BIT TO SEE WHAT ELSE WE HAVE GOING ON AT DEMBRUDDERS.COM!