Minicraft Models has a fun line of historic aircraft in 1/144 scale.  One of the best of the batch is their B-24 kit.  #14750 is the latest release and it’s been given deluxe treatment with inclusion of new pre-decorated canopies and the clear Minicraft Stand.

Join us as we take a look at the Minicraft B-24J and new derivatives of this classic kit in this triple-header review!

By Bill Engar
IN SHORT:  MINICRAFT'S B-24J RETURNS IN ITS BEST-EVER OFFERING.  A GOOD KIT IS MADE GREAT WITH THE ADDITION OF PRE-DECORATED CANOPIES AND NEW CLEAR MINICRAFT STAND.  COMPREHENSIVE DECALS PROVIDE UNPRECEDENTED DETAILS.  INTERESTING SCHEMES, NEW DECALS AND ADDITIONAL PARTS MAKE THIS KIT WORTH A SPOT ON YOUR WISH-LIST 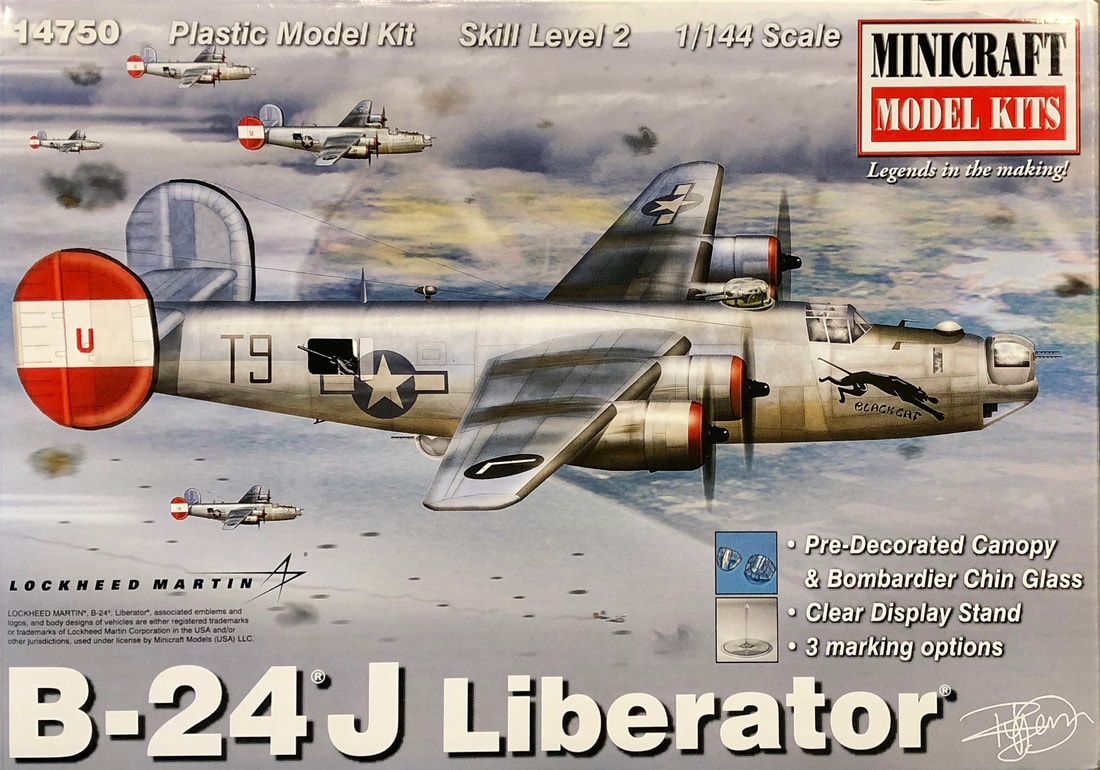 Let's start with #14750, Minicraft's B-24J.  This is the latest kitted version of Minicraft's B-24 with pre-decorated canopies and the Minicraft clear stand.
The B-24 has the distinction of being the most-produced bomber.  More B-24’s were made (about 18,500) than even the B-17 (less than 13,000).  The B-24 came later than the B-17 and incorporated advancements in aircraft technology such as the Davis wing and tricycle-style landing gear which improved takeoff handling and made for safer landings.
One thing to keep in mind when building a gear-down B-24 is that a fair bit of weight will need to be hidden in the nose to avoid a tail-sitter.  However, there is plenty of room between flight crew and nose transparencies to hide some lead fishing sinkers.
The model may have some minor sinkholes to fill and minor injector pin-marks.  None of this should deter any modeler from producing a satisfying result with this kit.

There's no need to consider aftermarket decals for a Minicraft kit.  Decal sheets are made by Cartograf so you can count on perfect registration and smooth application.  A nice bonus is that the olive-drab antiglare panels are included on the sheet, so you don't have to mask and paint them!

Dem Brudders are very impressed with this kit and give it an enthusiastic four-thumbs up!

We'd like to thank Minicraft for providing kits for us to review!
Kit# 14750 (B-24J "Black Cat") includes, in addition to the normal clear-parts sprue seen at left, two additional transparencies that are pre-decorated with silver framing.
Dem Brudders Crazy B-24 Trivia-That-Actually-Applies-to-Modeling:  While the B-24 was innovative for its tricycle landing gear configuration, the front wheel had NO powered steering!  The aircraft was taxied with differential braking and thrust.  We'll bet it was a pain to parallel-park.  While the wheel had no actual steering, it did caster (swivel like shopping cart wheels), so you can actually position the front wheel on your B-24 model in a turned position.  For pilots taxiing such aircraft, getting that front wheel stuck at a 90-degree angle was an embarrassing SNAFU. 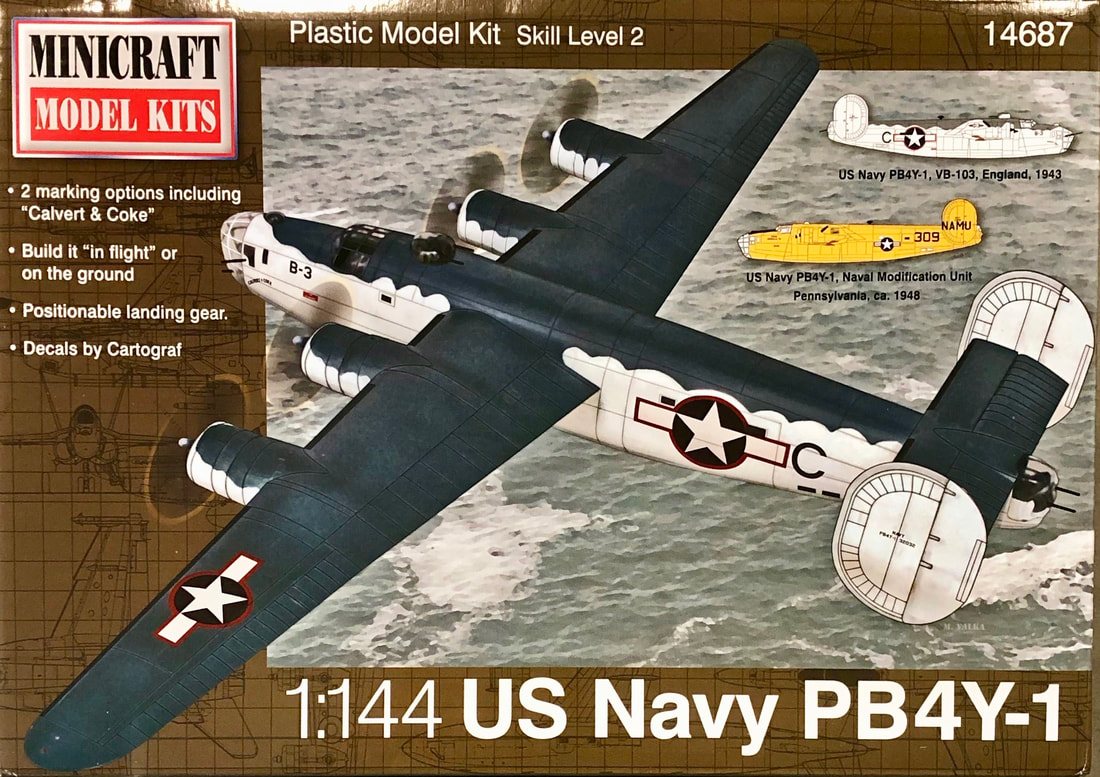 This kit includes modified tooling to depict the B-24D all-glass nose.  PB4Y-1 is a U.S. Navy designation.
While the B-24 was designed as a bomb-hauler, The U.S. Navy found use with the airframe in an anti-ship patrol and reconnaissance role, and the Navy gave the aircraft its PB4Y-1 designation.  Effective thanks to its range and endurance, the Navy developed the platform into the PB4Y-2 Privateer.  This aircraft is distinguished primarily by the single, tall tail, but there are a number of modifications that will would provide some rigorous activity for those modelers trying a conversion.

Here's another kit where you'd better just buy two since you'll really like both of these decal options.  Better get some "Navy Yellow" paint as well.
For many years, Minicraft’s B-24 in the late “J” version with the nose turret was the only option for a B-24 in 1/144 scale.  However, circa 2012, Minicraft tooled a new, transparent nose piece that could be spliced into the existing B-24 fuselage to create a “D” version of the B-24.
Another item to note in the photo above-right are the cockpit seats.  This is pretty rare in 1/144 scale.

NOTE:  THIS KIT HAS BEEN DISCONTINUED BY MINICRAFT, BUT IT CAN STILL BE FOUND AT SECONDARY OUTLETS 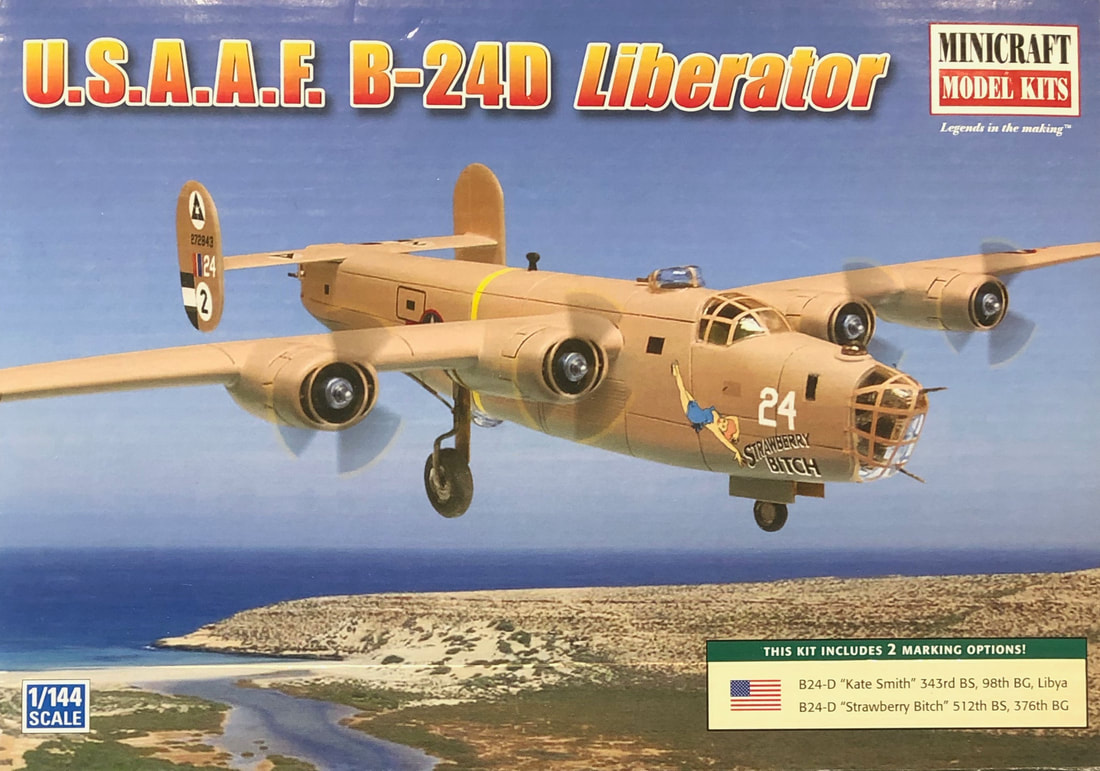 The box art is a combination of background photography and a built model.  Strawberry Bitch is featured.
Our last kit featured has actually been discontinued by Minicraft and it's no longer to be found on their website.  However, it can still be purchased either on eBay, possibly at hobby stores, and at model show vendor areas--it's not rare, at least not yet.  The reason I'm including it is because it represents the "D" variant of the B-24.  You never know; it's a well-known aircraft and perhaps some day Minicraft will re-release it (hint-hint;-) or include the option with a future version of the "D."

​This particular aircraft is also featured at the National Museum of the U.S. Air Force in Dayton, Ohio, and in the Bonus Material to this feature, we're including a bunch of photos.

The plastic's the same as #14750, Black Cat, so we're not showing it again.  Shown here are both versions painted for service in North Africa.  Note that each aircraft has a unique set of insignias - Minicraft is uncompromising when it comes to attention to its decal artwork. 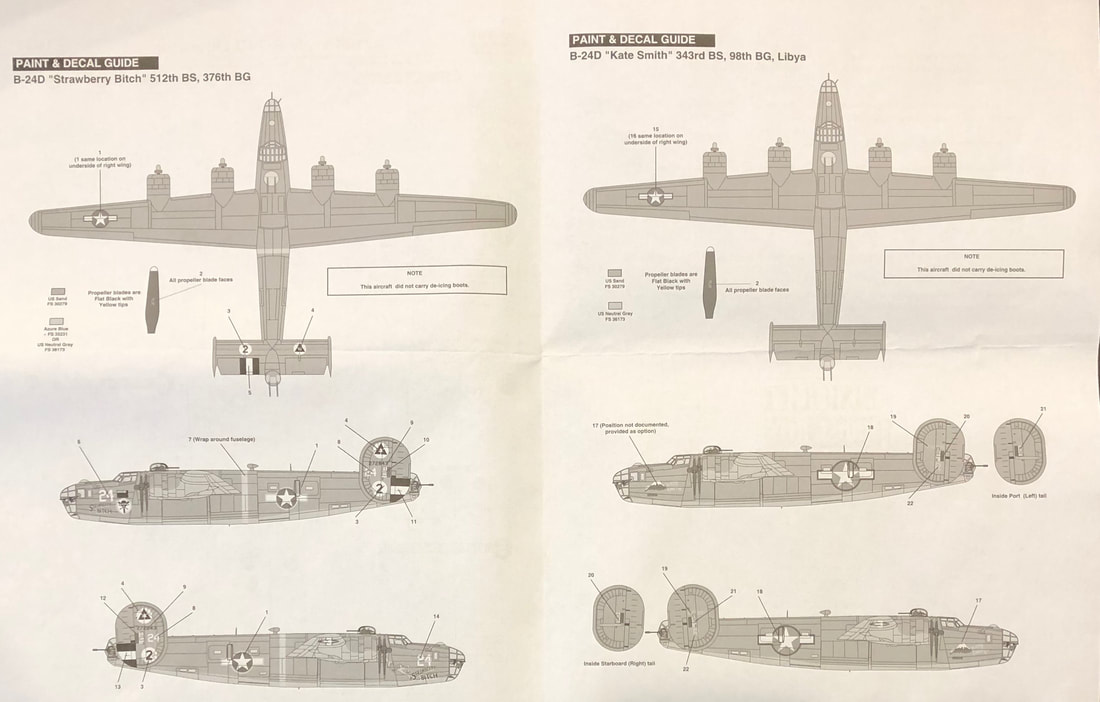 Markings on "Strawberry Bitch" were unique, especially on the tails.  Minicraft got it right here.  This feature will include photos of "Strawberry Bitch" as displayed in the National Museum of the U.S. Air Force in Dayton, Ohio.
Another item to consider regarding this kit is that it does not include the Clear Minicraft Stand.  The stand first debuted after this kit was released.  It doesn't include pre-decorated canopies either.  However, it does include the "D" nose which was brand-new in 2012!
BONUS:  A PHOTO GALLERY OF "STRAWBERRY BITCH"

"Strawberry Bitch" resides at the National Museum of the U.S. Air Force adjacent to Wright-Patterson Air Force Base near Dayton, Ohio.  Dem Brudders highly recommend a visit.  During the IPMS Nationals in Columbus Ohio on 2015, Dick and I made a visit to this museum.  In the WWII Gallery, "Strawberry Bitch" is on display.
These right-side views show nose art.  The fact that this aircraft is a "D" model and painted in a desert scheme indicates that it flew in North Africa during WWII.  As the North Africa campaigns began, the "D's" were coming off the production line.

This panoramic shot emphasizes the long wing of the B-24 thanks to some fisheye-type distortion.
Two views of the tail turret reveal the gun elevation mechanism and painting of the inner surfaces of the B-24's double-horizontal stabilizers.

This view demonstrates the beauty of the new clear "D" variant nose on Minicraft's 1/144-scale B-24.  You can mask off those small windows (just above the Strawberry Bitch titles here) and get a nicely realistic model 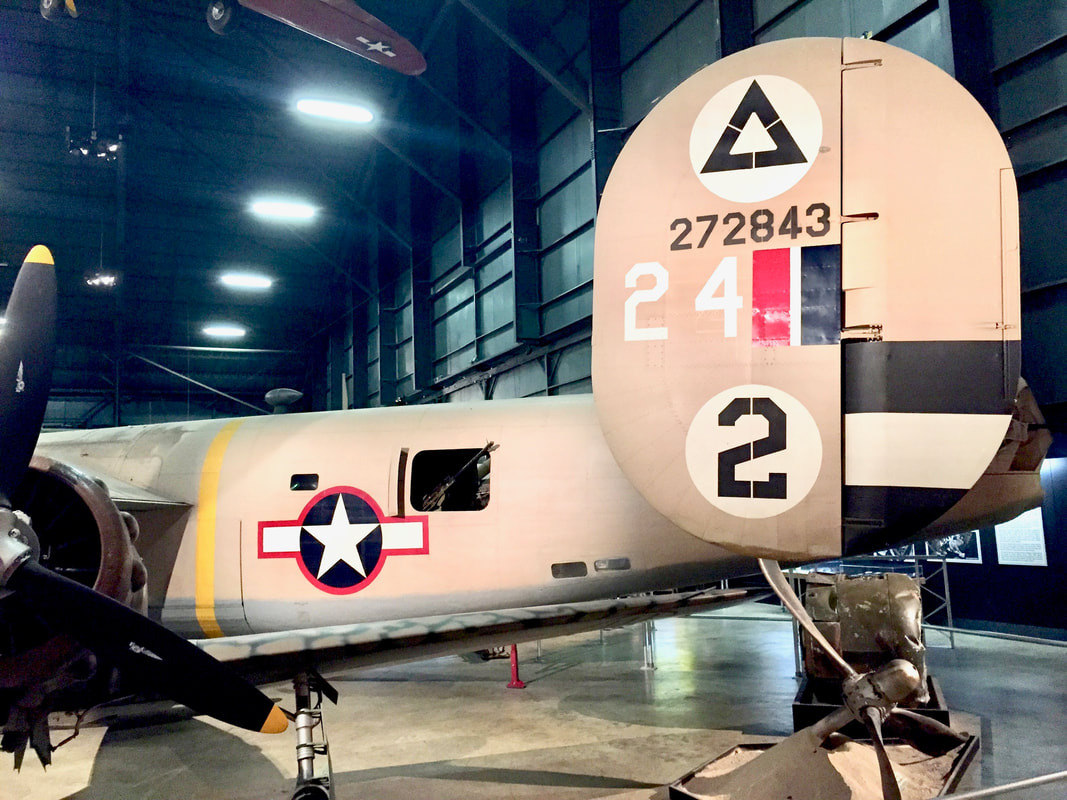 One of the big challenges of photographing museum aircraft is finding good vantage points to get the whole plane in the picture.  The Macchi was in the way (note the Macchi wing just below the B-24 fuselage).  This view shows details found in Minicraft's B-24D including the yellow stripe, red-outlined insignia, and striking stabilizer markings.
In the closeup view, note how the waist-gunner doors swing up and out of the way when it's time to point the guns outside.  At right in the same photo can be seen an air deflector intended to reduce turbulent air in the gunner's compartment.  That air deflector folds flush with the fuselage with the doors closed.

Another item to note is the rivets - they are quite prominent close-up.  Note how they disappear in all other views taken further away from the aircraft!  In my opinion, you can make the case for rivets on a 1/48-scale aircraft.  They're probably a stretch in 1/72 and certainly 1/144 scale--but we love them anyway on our vintage kits!  Panel lines are the same deal - note how hard it is to see them in the photo on the right! 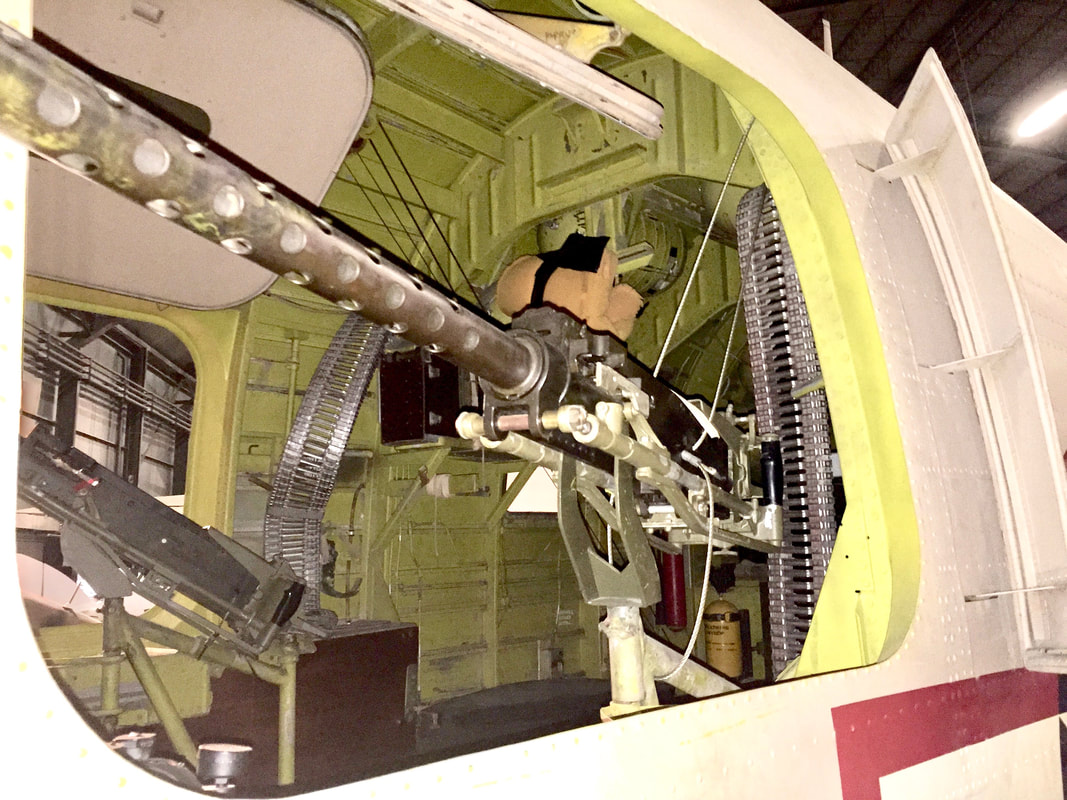 Here, you can see both waist-guns on their mounts.  This photo was taken with a flash to illuminate the interior.  Note how much better the interior shows up.  If you don't want to detail the insides of a model that might be visible behind a window or opening, just paint the interior flat black.
Here are some detail shots of the "D" nose along with the Norden bombsight
These views from the aircraft's right side show the position of the Norden Bombsight.  Note also the ball-mount for the gun.
The tall, triangular-shaped window above the gun in the left picture was the viewing surface for the Norden bombsight.  To avoid parallax errors, it was a flat pane of glass; never plexiglass.  Other aircraft such as the B-29 and B-17 had this flat plane-glass for the same purpose.  At right, near the top, the Norden bombsight view is opposite the Wikipedia view above.
THANKS FOR VISITING - SCROLL DOWN A BIT TO SEE WHAT ELSE IS NEW AT DEMBRUDDERS.COM