Minicraft Models has re-released its Ju-88 in a classic, colorful scheme with pre-painted canopies and enhanced decals.

The Ju-88 was a versatile twin-engine design used by the German Luftwaffe in WWII.  It debuted in the mid-1930’s and was produced through 1945 in significant numbers.  Originally designed to outrun the fighter aircraft of the day, it was used as a heavy fighter, attack bomber, and in reconnaissance roles.
WHAT IT IS:  An already excellent kit gets even better with pre-painted canopies and enhanced decals on the most colorful paint scheme the kit’s ever had.  This is simply a Mustn’t-Miss-Model.

Like the other kits in the Minicraft 1/144 Legacy Series, the Ju-88 had its origins in the 1970’s.  Minicraft has had it in their catalog continuously since taking ownership of the tooling in about 1992.  In the year 2000, they modified the tooling to add a “C” variant (solid nose with guns).
My general opinion of Minicraft as a company is that they strive to exceed a modeler’s expectations, and a great example of this is the pre-painted canopy.  The box shows the main pilot transparency as a pre-painted part.

A classic, colorful color scheme for the Ju-88 covers the glass-nose and gun-nose versions.  What's that black diamond on the tail?
When I first saw this kit, I wondered about the bombardier nose transparency since this is by far the hardest part  to paint on the kit.  It’s not pictured on the front of the box as being pre-decorated.  Rest assured, that part is in the box, predecorated, and done particularly well here.
From a technical standpoint, this kit rates with the best of the series.  Amazingly, I could not find one sinkhole in my kit that will need filling.  Perhaps more noteworthy was that I could not find a single ejector pin mark that will show after the model is built.  A nice little extra includes well-detailed (for 1/144 scale) engine faces.  Another is that front transparent nosepiece; in the scale, it almost looks like a faceted diamond.  The downside to previous releases of the kit was that it was very difficult to mask and paint this part.   The pre-painted nosepiece completely eliminates that issue since it’s executed lot better than you could probably do it yourself (certainly better than I could do it).
Painting the model might rate some intermediate skills since four colors with quite a bit of masking will be needed.  I’d recommend Testors Clear Parts Cement and Window Maker to glue on those nice pre-painted canopies.
I have to admit I’m not an expert of any kind on German WWII aircraft, but I believe the interior cockpit color of the Ju 88’s should be RLM 66 schwarzgrau (dark gray).  To depict it on this model, I certainly would not recommend purchasing a separate bottle of paint to do those relatively small interior panels under the canopy parts. I plan to mix some glossy black and white to come up with a medium or neutral gray, a shade or two lighter than dark gray, paint the panels under where the canopies will go, install the cockpit decal (after the paint is dry, of course), hit the dry decal with a clear flatcoat, and then use some pastels to weather up parts of the decal.  Adding some shade variations will create a little visual interest that should look great underneath that pre-decorated canopy.
One interesting aspect of the two markings selections is that they both resemble the same Luftwaffe unit at the Russian Front in 1942 and 1943.  With the same paint scheme, two models with the different nose options teogether will make an interesting display, so I can certainly see a justification for wanting two of these kits.  At $14.99 MSRP each, a pair of these kits shouldn’t break the bank for you.

We can't think of a whole lot to do here outside of an out-of-box build to have a striking Junkers Ju 88A/C model in 1/144 scale.  The colorful paint scheme might throw beginners, but nobody should have any real problems getting this one built.  If you haven't ever built anything in 1/144 scale, here is an excellent place to start.

This model checks all the right boxes (all 88 of them) when it comes to features and build-ability.  Dem Brudders give it a Super-Enthusiastic four thumbs-up!

As mentioned, Dem Brudders do not profess to be experts on WWII German aircraft, so we can't wow you with a database of our knowledge on the subject.  Instead, enjoy this photo gallery of the Ju 88 D-1/Tropical on display at the National Museum of the United States Air Force in Dayton, OH.  Our last visit was in 2015, during the IPMS/USA National Convention which took place in Columbus, OH.
Not many of over 15,000 Ju 88's built before and during WWII survived.  This example was a Royal Romanian Air Force photo-recon version flown to Cyprus by a Romanian pilot wishing to defect to RAF forces.  It was eventually flown to Wright Field in Ohio, USA.  It became an important test and evaluation aircraft for the Allied war effort.  It was later restored to its original Romanian markings and put on display indoors where it remains today.  Note the engine faces.  You can't see any cylinder detail since they are behind a screen-like material.  The Minicraft kit really captures this well.  Also note that the landing gear doors are pretty thin!  You could shave them down a bit, but the kit really doesn't need much of anything else to make it look amazing other than a good out-of-box build.  That's why we like it so much.
Attention Super Detailers!  Two views from a slightly different aspect show you precisely what you can see inside the forward interior--not much!  Don't go to the trouble.  The color of the "stuff" in there does appear to be a very dark gray.  Note the underbelly "canoe" fairing, offset to the right side of the plane.
Here's some engine and tail details.  Props appear to be RLM 71 dunkelgrun (dark green, but the lighter shade compared to schwarzgrun).  Exhausts appear to be a dark burnt-steel color.  Again, I'm not an expert, but those colors look right to my gut-feeling for the German versions.
Here's a good look at the Romanian insignia worn by the aircraft from WWII.  Kudos to the museum for portraying it as it was originally.  Prior to this restoration, it wore a spurious German Luftwaffe scheme.  That's Brudder Dick looking for the next plane to photograph.

We know that some of you out there aren't going to be content with a straight out-of-the-box build as needed to execute a very nice model from this kit.  We love you guys.  Here's a fun suggestion: 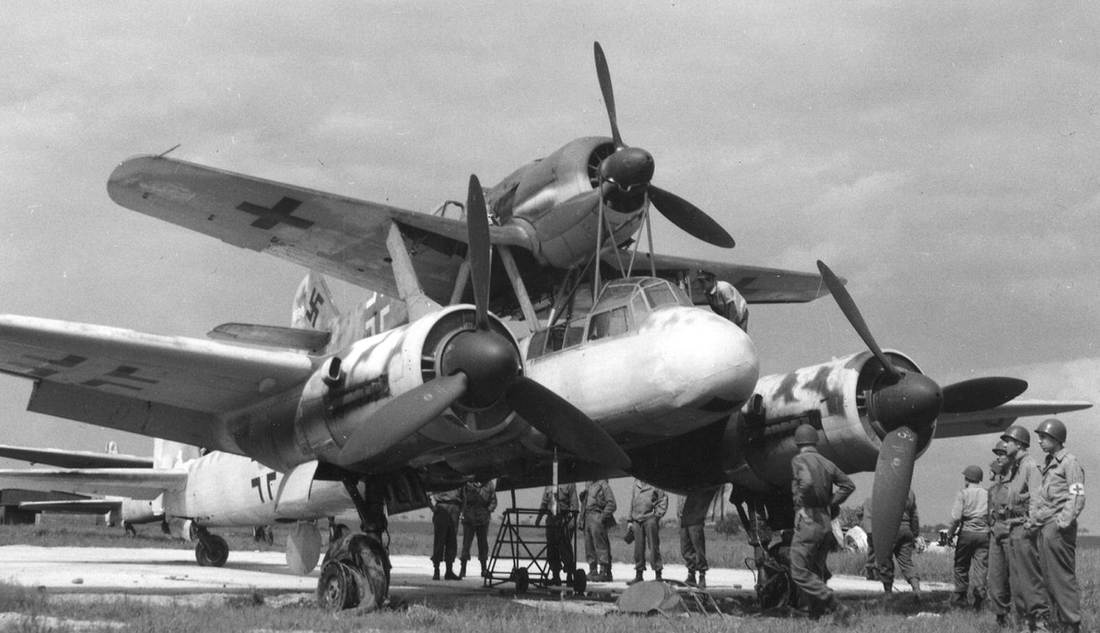 The Mistel composite aircraft probably doesn't need an introduction to most modelers interested in WWII weaponry.  It will definitely be easiest to build one using the Minicraft Ju 88 in 1/144 scale.  Minicraft doesn't make a Focke Wulf Fw 190, or Messerschmitt Bf 109  in 1/144 scale, unfortunately.  If they did, we know they'd be awesome models, especially the decals.  But several other companies have made these in the past, and they shouldn't be hard to find at a reasonable price.  Beyond that, you'll need some small styrene struts.  There are plenty of pictures online to give you ideas on any specific variants you'd like to build, but this looks like a fun and not-too-difficult conversion project that will give you a very unusual model at the end if you can pull it off.

SCROLL ON DOWN TO SEE WHAT ELSE IS GOING ON AT DEMBRUDDERS.COM