WHAT GOES INTO A MODEL KIT?

​COME EXPLORE THE DEVELOPMENT OF THREE VINTAGE MODEL KITS OF THE USS NAUTILUS, THE FIRST NUCLEAR-POWERED SUBMARINE
By Bill Engar
​
Much of this content is material from an article that appeared in the IPMS Journal a long time ago.
UPDATE 19 OCTOBER 2020:  On their Facebook page, Atlantis Models posted a partial list of their new kits expected to be released in 2021.  Among them was "1/300 USS Nautilus Submarine."  We're very excited about this announcement; let's just say that Dem Brudders provided some input to Atlantis Models for this kit.  That's all we'll reveal about it for now, but stay tuned as we may have some additional information that will necessitate an update to the following article.  We'll review the kit once it debuts!

Welcome to our continuing series documenting the history of classic model kits.  It’s now been well over a half-century since the U.S. Navy’s first atomic submarine Nautilus began her amazing quarter century of service in the defense of freedom.  We’ll discuss Nautilus history and the interesting development of the Nautilus model kits.  We’ll also weigh in on Classic Modeling.
There’s no denying that modeling has changed a lot in 50 years or so.  For one thing, we modelers have grown to become a picky bunch.  Nowadays, when a model kit of a revolutionary new type of vehicle is introduced, one of the first things we do, besides tearing off the venerable shrink-wrap and enjoying that wonderful new-plastic smell, is to ruthlessly pick apart the accuracy of the model.  Remember a few years back when the first models of the new X-35 Joint Strike Fighter were released?  I recall lots of grousing.  The nose is the wrong shape!  The canopy is missing its framing!  The tail is too broad!  These doors open the wrong way!  The markings are wrong!  The kits are too expensive!  I lost parts in my carpet!  Picky, picky, picky!  I wonder if the model kit manufacturers are sitting back thinking, see if we give you any more new kits, you ingrates!  Of course, they realize that they have to keep feeding their families, so they do give us new kits in spite of our whining.  I, for one, think they do a pretty darned good job.

​Way back in the good old days, model manufacturers reasoned that the best way to sell the most kits was to get them to market as soon as possible.  Perhaps this still happens today, but many early models traded accuracy for haste in the race to reach hobby shops first.  A great example of this is the trio of Nautilus SSN-571 submarine kits released by Aurora, Revell, and Lindberg.  Dem Brudders invite you on a journey back in time.  Grab a ride in your time machine of choice.  Our destination is the early 1950’s.

The Nautilus (SSN 571), represented the biggest breakthrough in submarine technology since reciprocating engines.  Her new atomic reactor allowed the sub to remain submerged for weeks and months, not hours or days.  Any submarine could be detected once it reached the ocean’s surface, and prior to Nautilus, submarines had to surface fairly often to run their air-thirsty diesel motors required for charging batteries.    These batteries had a relatively limited capacity to run the power-hungry aspects of underwater operations such as propulsion, air handling, lights, instrumentation, and weaponry.  Atomic power for vehicular propulsion was a new concept—in fact, the non-destructive use of atomic energy for anything was still quite revolutionary when the Nautilus was being designed.  As the superpower Cold War was likewise in its early stages, The United States Navy closely guarded information about the development of the Nautilus. 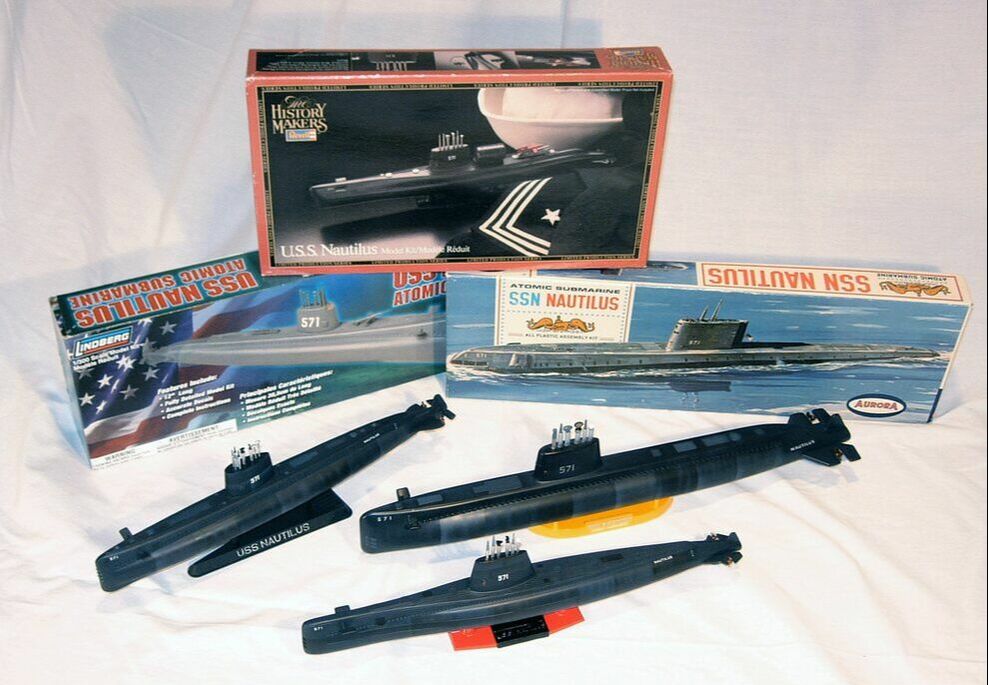 Three classic kits from the 1950's and boxes from the 1960’s, 1980’s, and 2000’s
​The Nautilus’ revolutionary reactor used only a handful of uranium—less than ten pounds according to some sources.  A development version of this reactor was built and tested at a secure facility in Southeastern Idaho’s high desert.  A mock-up of the Nautilus’ propulsion section was built there, hundreds of miles from any ocean, and all aspects of real-life operations were carefully tested before the real Nautilus would take to sea.  This facility was used into the 1990’s.  Many naval submariners trained there.   Visitors report that it was a fascinating sight to see scores of Navy personnel dressed in submarine garb learning their jobs on nuclear submarines—in the middle of landlocked Idaho.
​In the December 20, 1952 issue, an article with drawings appeared, and the public saw for the first time just what the Nautilus would look like and learned some aspects of its operation.  The engineering departments at Revell, Lindberg and Aurora hopped into action, using the information from the article to create kits of the new submarine.

The models began to show up in stores in 1953 and 1954.  All of them were fairly simple kits as were most models of the period.  Each ended up with a deck missile not present in the art from Collier’s Magazine.  Later versions of Aurora’s and Revell’s kit had a missile storage chamber, and the Lindberg kit even included a deck gun, reminiscent of many World War II submarines, and certainly not present (or necessary) on the real Nautilus.
Each kit has its strengths and weaknesses, and each one seemed to capture certain aspects of the sub quite well from the article.  There are variations in certain details of the Collier’s Magazine artwork, and some of these are reflected in the three models.
For example, Lindberg’s kit captures the open torpedo doors as featured on the magazine’s cover, and Aurora’s depiction uses the profile drawing in the body of the article that seems to show twelve doors.  Revell’s six open ports appeared to have come from an additional three-quarter view picture.
​Aurora’s kit was one of their most popular and sold through the 1970s, prior to their demise.  They also released it as the Seawolf (SSN 575), although the Seawolf was quite a different submarine with its longer, raised nose profile and stepped conning tower.  The Revell and Lindberg kits have been more recently available through reissues.  All three kits can be found with varying availability and prices on EBay.
​Repeated sanding and priming is recommended until the remnants of these seams are gone.  The shaft side of each propeller is completely flat.  I decided to thin the blades a little, providing them with more realistic pitch on the front-facing shaft side.  The decals from my 1970’s vintage edition silvered badly.  Luckily, I had copied them before cutting the sheet; this copy was cut into a mask exposing the clear, silvered areas.  A quick shot of base color covered up the silvering; the taped-on mask preserved the markings.  Just be sure you don’t get the tape near the decal, or it is likely to pull the decal up when the mask is removed.
LINDBERG KIT:  The center seam atop Lindberg’s 1/300 scale Nautilus isn’t a problem as it is covered by two flat parts representing the sub’s teakwood deck.  These parts have their own issues, however, with gaps around the sail.  After gluing the hull halves together, it was apparent that the rear horizontal tailplane mounts didn’t line up.  I shaved one of them off with a razor blade and simply moved it over a little until its location better matched the other side.  The petite periscopes and antennae comprise nine individual parts which is one of the virtues of this kit.

These masts more closely resemble the actual configuration than those on the other kits which only give a two-dimensional representation.  Although they suffer a little from mold mismatch, once they are cleaned up, they are easy to paint individually and install once the rest of the model is complete.  Lindberg’s decal from the kit’s most recent releases consists of large, white numerals outlined in red.  I’ll be darned if I can find references supporting this decal artwork.  I used a spare Revell sheet.  The 1982 vintage “History Makers” decals went on like a breeze.

REVELL KIT:  This 1/305-scale model seemed to go together much like the Aurora kit.  A few issues caused me to divert somewhat from the IPMS/USA definition of building the model out-of-the-box.  First of all, the propellers were hardly recognizable as such.  At some point, Revell replaced the original issue three-blade props with five-blade versions which didn’t look so good in my 1982 issue of the kit.  I decided to scratchbuild replacements.
There’s something that seems perverse (in a modeling sense) about replicating an inaccurate item, but at least it was fun.  Those rivets would have to be close to a foot across if scaled to full-size.  Oh well!  They looked consistent with the rest of the kit.  Revell’s centerline  antenna/periscope complex required the same procedures to clean up seams as Aurora’s.

Another modification to Revell’s kit was performed on radar mast number four (counting from the front).  My kit had an affair which looked like a tuna can on its side.  I simply created a ring by drilling a hole in the center, and then cut off the forward half to create the arc-like radar reflector present on older releases of the kit.  The "tuna can" probably came about from a lazy effort to repair some mold damage that occurred between kit releases.

The Nautilus wore different color schemes through her career, but I remember her best in ominous black.  That’s how I decided to render my three models.  In the future, we'll discuss how to fancy-up "basic black."

So there you have it; these kits have numerous issues with accuracy.  But I had a lot of fun building them anyway.  Some modelers that open a kit and see inaccuracies have conniptions, and put the model at the back of the closet or get rid of it.  Some see it as an irresistible challenge to produce a presentable model by making the needed corrections.
I, for one, hope to see more of these old kits reissued with their original box art.  For the modeling companies, there isn’t a whole lot of investment, other than cleaning up an old mold, and duplicating an existing version of box art.  Many of them even have copies of the original instructions.  Perhaps their market analysts question whether or not anyone will want to buy them, but in today’s world, nostalgia is always a popular product.  Who can resist that classic box art in fresh, new shrinkwrap?

I wasn’t even near being born when the Nautilus kits came out, and brudder Dick was pretty darned young, probably not eating solid food yet during that period of history. However, researching the history behind these early kits and the real prototypes is something that gives me lots of satisfaction.  Finding and building these old kits is awfully rewarding, too.  Whether I get these models from modeling pals, swap meets, model shows, online auctions, or hobby shops makes no difference.  If you’re the type of modeler who has to have the latest technology kits from the crispest molds, try an old kit for a change.  Research the history behind the manufacturer, and the model.  Go to your hobby shop, and pick up this stuff called “Modeling Putty.”  You may want to buy the big tube.  Correct all the model’s glaring inaccuracies, or just slap the darned thing together!  It’s fun—certified guaranteed from Dem Brudders! ​

The Nautilus as she appeared during my last visit in 2014.  The submarine is moored on the east bank of the Thames River near Groton, CT, USA.