IN ANTICIPATION OF THE "HOT OFF THE PRESSES" ATLANTIS B-29, WE PRESENT A PHOTOESSAY OF A FAST-BUILD AND WHAT YOU CAN EXPECT WHEN YOU CAN GET YOUR OWN HANDS ON ATLANTIS' NEWEST AIRCRAFT KIT
​EARLY EDITION:  Atlantis' new kit is an old Revell favorite.  It'll be a vintage experience, but you can definitely finish this kit in a weekend!

Atlantis has just released its new Boeing B-29 model kit in 1/120 scale.

We’re very happy that Atlantis Models likes our comprehensive review/articles on the model kits we feature, and Peter Vetri at Atlantis and I had some conversations about this kit prior to its release.  Long story short, during kit development, Peter asked me if I had any photos of a built-up model they could use in promotion and box art.  I didn’t at the time but being a huge fan of the kit and having a previous Revell example available unbuilt, I told him I’d see if I could get the kit built in a weekend to have photos ready since Peter needed to get some pictures to the box printer.  See the Atlantis B-29 kit listing here! 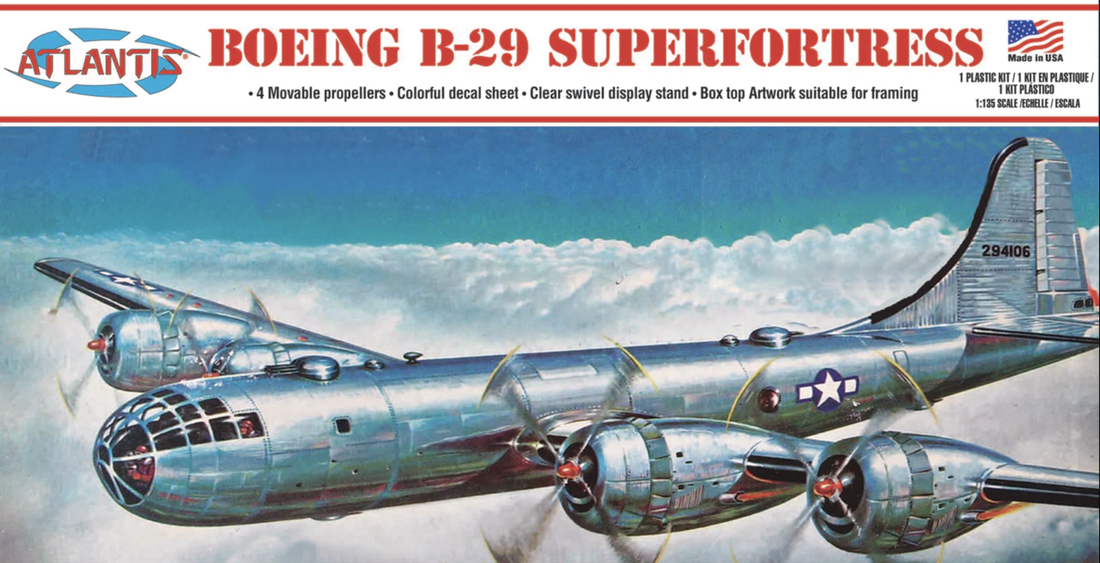 Atlantis brings back this gorgeous Revell box art that graced the box of  the first edition of the 1954 kit.  Yup, it's been 2/3 of a century since this one first appeared.  While we haven't yet seen the actual Atlantis plastic here at DemBrudders.com, we suspect that the kit will be better than ever with multiple choices for decals reflecting previous releases of the model.

Parts from the 1973 version of the classic 1/120 Revell B-29.  We'll show you the Atlantis parts as soon as we can.
Can the new Atlantis B-29 be built in a weekend?  The answer is a resounding yes!   The original kit has some very nice details, and we're sure the Atlantis version will make a nice addition to your other desk-scale models that Atlantis Models has released.  Those of you who want to take your time and build the model to very high standards of workmanship will be happy.  However, those of you looking for a leisure “weekend build” should be very happy too, and I am pleased to present this photo essay on my fast-build.
First of all, this was an original Revell kit first tooled in 1954.  As one of their most popular, it was re-released many times through about 1979.  After that, the tooling went into storage and it hasn’t seen the light of day until Atlantis acquired it.  Under licensing from Boeing arranged by Atlantis, the vintage kit now reappears.
Revell boxed four of their vintage “Desk-Scale” model kits in one awesome set, the Strategic Air Command Bombers set of 1954.  It has been some time since modelers could buy each of the four models available.  During the past couple years or so, Atlantis has released the B-52, B-36, and now the B-29.  We hope it’s just a matter of time before they can release the classic 1/115 B-47 so we can once again acquire each of the four bombers that were originally in this awesome, highly collectible set!
There has been some confusion about which “Box Scale” the classic B-29 actually is!  Over the years, different numbers have been cited such as 1/130 or 1/135, which would be closer in size to the 1/144 scale Minicraft B-29 kit.  I knew that the Atlantis nee Revell B-29 kit was a fair bit bigger than the Minicraft kit.
When Atlantis Models and I had our conversation about the kit, they had not yet been able to evaluate test-shots to get these important dimensions, and so I was able to measure my kit, which was the Revell 1973 release.  The wingspan measured 14” and length was 10-1/8”.  I simply taped the kit together to get the measurements before beginning construction.  These numbers were just slightly larger than what was cited on the 1973 kit box.
Parts fit is pretty good for the most part.  A few items need some trimming, and the best recommendation for this kit is to test-fit the parts before painting or gluing.  The gunner's sighting bubbles and the guns were a tad big for the holes they go in.  Pay special attention to these before final painting.  That's really the only minor fit bugaboo I experienced and I recall the same issue when I built this kit as a kid.  Fixing it is no big deal if you do it before final painting.  That front cockpit transparency fit in place like a piece in a Swiss watch and I didn't even bother gluing it in since it was precise and snug.

While I would have spent a little more time with painting to come up with a contest-quality model, I enjoyed my “weekend build” and can definitely recommend this kit to anyone who wishes to put either a little or a lot of effort into it—modelers who embrace either building philosophy will be happy. 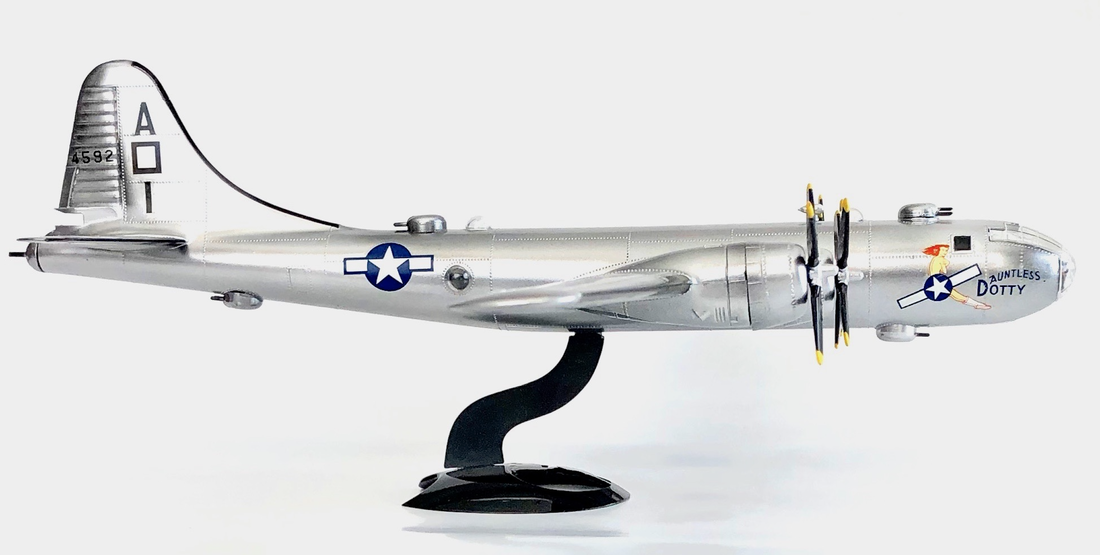 This is a cool picture.  But I forgot to put the tail transparency in place for the photo!  That stand is vintage-Revell.  Atlantis will probably include their clear "Atlantising Stand"
Those who may have previous releases of the kit will want to buy the new Atlantis version anyway.  Atlantis plans on including several decal versions that came with original releases of the kit, so you’ll have a choice, and perhaps an incentive to buy more than one kit so you can build the different versions.  Quality of their decals is always first rate—the decals on my nearly 50-year-old kit broke in pieces when I tried to apply them, so you’ll want to leave those old collector-kit releases of yours in their boxes and build the new Atlantis kit instead!  We're sure that this Atlantis version will be a collector-kit some day.  Better buy an extra.

We hope to add to on to this review once we get a chance to see the new Atlantis plastic.  Stay tuned!

Another thing I'll do on my next build is to mask off some panels to provide a little differentiation in metal-grain variances.  I would also have masked off the control surfaces and hit them with a flatter clear finish to simulate silver-doped fabric.  However, thanks to the fragility of my glossy-black base coat and my build-in-a-weekend mandate, I had to cast those enhancements aside. 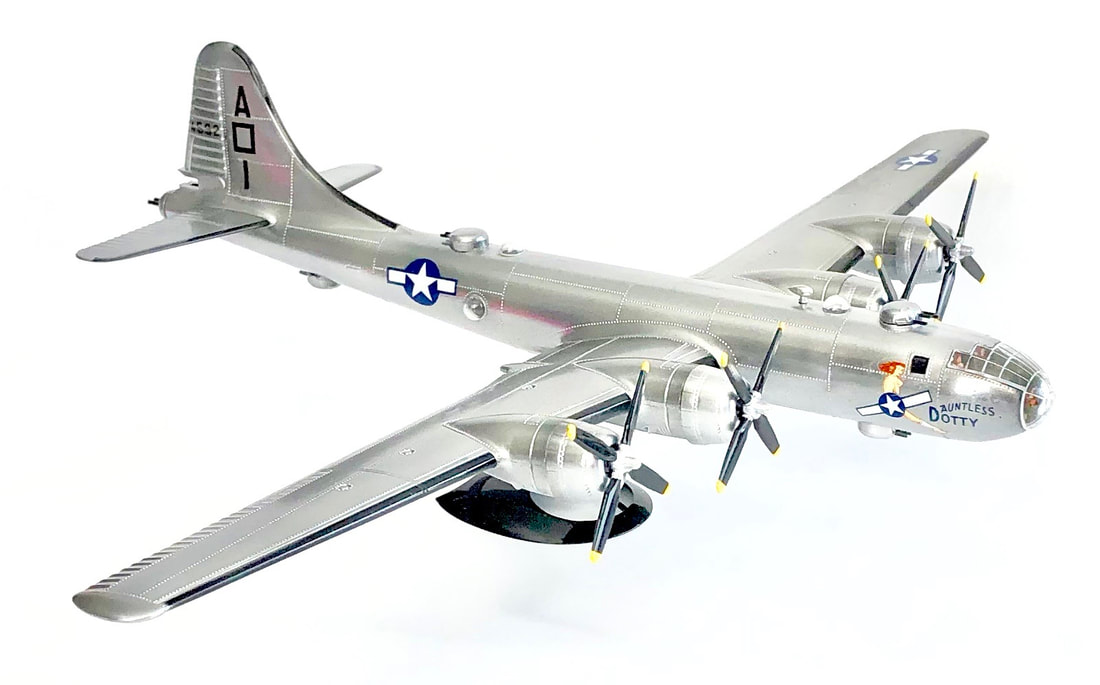 Another area I didn't have time to paint was cockpit framing!  The underside engraving that came with the kit canopy passes as petite silver lines, so I had to let this suffice for my weekend build.  The de-icer boots and props have a tad too much sheen for my liking as well, but that shiny-black had to double as an undercoat for the silver finish.  Perhaps with an extra day or so, I could have taken it up a level.  Regardless, this kit is an easy-build and one you'll be happy to add to your collection of great Atlantis models!